For many, this was a year that saw fewer presents under the tree than usual. In a tough economy, however, one group found itself facing an unprecedented abundance of riches: for the first time, there was not one but four Christmas movies for the LGBTQ community to revel in and analyze, celebrate and critique. The term “Christmas movie” brings immediately to mind two things: the child-friendly fantasies based on children’s books or specials by Rankin-Bass, and the holiday romances pioneered by Hallmark Channel. The latter has slowly become an institution so predictable that it’s easy to lampoon. In any given year, we are presented with the hard working big-city business woman who goes to visit her family at Jingle Junction (an impossibly Rockwellian small town devoid of parking lots and poverty) where she falls in love with the local baker/Christmas tree farmer/boy-next-door and saves Grandma’s general store from being bulldozed by a major corporation.

These films, like their pulp romance counterpoint, tend to be fantastical yet almost predictably “straight.” That changes this year with an unprecedented four films featuring queer stories, The Christmas House (Hallmark Channel), The Christmas Setup (Lifetime), Dashing in December (Paramount Network), and Happiest Season (Hulu). With such a wide buffet of “Holiday Queer,” the results point to how both industry representation and the concept of a “Queer Christmas” film still need refining. In the spirit of a bright New Year, let’s examine these gifts more closely.

Hallmark’s The Christmas House came with much anticipation, following last winter’s PR debacle. In 2019, Hallmark stopped broadcasting an advert featuring a lesbian couple, after a letter-writing boycott campaign from “One Million Moms,” (a far-right group run by SPLC designated hate group, The American Family Association) reached the network. This put the network, famous for its Christmas films and favored by conservatives for its apolitical programming, in the crossfires between conservatives and progressives. Ultimately, Hallmark reinstated the adverts, but the incident allowed for a point to be made — in its 20 years in existence Hallmark had yet to include LGBT characters in their plots.

Unfortunately, despite the anticipation, Hallmark opted for the path of least resistance: The Christmas House centers on Mike (Treat Williams), a straight actor returning from his exhausting acting career in the big city to his family’s small town in order to help his parents put together the eponymous “The Christmas House” (a gaudy overhaul of their large home with Christmas decor) before his parents sell it. The subplot focuses on his brother Brandon (Jonathan Bennett) and his husband Jake (Brad Harder), a married gay couple who are waiting to hear whether they will be able to adopt. While this sub-plot is intriguing, it remains just that: the focus is on Mike and his possible romance with his childhood best friend, as well as his efforts to save his parents’ house.

While it is encouraging to see the full integration of a gay couple within the fever dream of a Hallmark movie, The Christmas House fails to rise above the two other “queer inclusive” Hallmark films aired this year: the equally Christmas-themed Christmas She Wrote, which features the main character’s gay best friend having a tame romance, and August’s Wedding Every Weekend which included a lesbian couple’s marriage, again as a subplot. Brandon and Jake’s kiss seems like a step forward for Hallmark, which also points to how far behind it is in terms of queer representation — gay kisses were daring in the 2000s, yet 20 years later and Hallmark is just getting there.

Paramount Network’s Dashing in December (MTV Films), is equally cautious. While having a larger budget, and boasting much better cinematography and lighting, the film feels at odds with itself. Wyatt Burwall (Peter Porte), a big city businessman, travels to his family’s large ranch to convince his mother to sell the faltering business. There he meets Heath (Juan Pablo Di Pace) the new ranch hand. The ranch setting gives the film an edge over its counterparts, but the story can’t seem to decide if it wants realism or the romantic fantasyland these films typically conjure. The men don’t get along at first, only warming up to each other when it is revealed that both are gay. Yet their romance seems at odds with the plot. At one point, Peter’s mom Deb (Andie MacDowell) invites her son and her hands to a local country bar. There, Peter apologizes to Willa (Katherine Bailess) the girl he dated in high school and used as a beard in a touching moment of realness. However, his romance with Heath seems to be rather soulless. Heath sets up an evening where he can be the first man Peter, an out New Yorker, has ever danced with, followed by a magical horse ride through the night followed by lighting up the Christmas lights and a first kiss. While certainly romantic, the moment seems over-done, as if the production was checking boxes, and is placed awkwardly against a third-act fight the very next morning that threatens to doom everything. While aesthetically pleasing, and somewhat less sugary than its counterparts, Dashing seems to be wavering between a realistic drama and wish-fulfillment.

Lifetime’s The Christmas Setup fairs much better, carefully balancing its queer elements with the expectations of the genre. New York lawyer Hugo (Ben Lewis) heads to Milwaukee to visit his mom (Fran Drescher), a micromanaging bundle of energy that’s determined to see everything done just right.  There he meets Patrick (Blake Lee), an old high school friend that makes him weak in the knees. Where Dashing and Christmas House felt removed from real-world gay experience, Christmas Setup embraces it. Instead of drawing attention to the characters’ gayness as if it were a superpower, the film lets queer elements in organically. Patrick reminds Hugo at one point that the city has changed since they were kids. An LGBTQ youth center is open and people have changed, adding a meaningful layer to the usual insistence that a big-city character embrace “small town” life (does this even make sense for Milwaukee?). Later in the film, the two attend a Christmas drag show at a bar complete with singing and jokes. However, more important is how both characters muse about the importance of preserving queer history. Part of Mom’s Christmas schedule is the annual Christmas party at the old train station (soon to be demolished for a high-speed rail station, an awkward moment of anti-progressive sentiment in an otherwise progressive-leaning film). The tradition, started by the station owner generations before, sparks both men’s interest as Hugo breaks into the old station master’s office (a historical display). As he revisits the papers left behind, he realizes that station master was gay, and the tradition was started in memory of the man he loved. This pushes Hugo to reevaluate his priorities, and he and Patrick come together with a new mission to preserve a tradition rooted in their own queer heritage.

Last, but not least, there is The Happiest Season. Originally scheduled for a theatrical release before COVID, the TriStar film makes its US debut as a Hulu exclusive. Happiest sets itself apart, not only because it was never intended as a hallmark-esque Christmas film, but also because it’s the only film of the four to focus on a lesbian couple. Abby (Kristen Stewart) is a PhD student in Art History, who agrees to come to her girlfriend, Harper’s (Mackenzie Davis), family Christmas. En route, Harper confesses she is not actually out to her family and in her anxiety has presented Abby as her “roommate” to them. What proceeds feels more like a horror film along the lines of Jordan Peele’s Get Out (2017). Harper’s anxiety causes her to regress into an unrecognizable person as she slips into old habits, battling with her older sister Sloane (Alison Brie) for the affections of their parents. Abby is increasingly isolated and pulled unwillingly into her girlfriend’s toxic family battle. Completely devoid of the sugary Christmas film habits (save perhaps in a small dose at the end), the film probes the pain, frustration and isolation that fear brings when someone can’t be themselves in a season that bills itself as an intimate time with family.

Most likely unknowingly, Happiest seems to reference what was, perhaps, the first queer Christmas film to hit America, Some of My Friends Are… (1971, dir. Mervyn Nelson, et al). Shot during the early years of post-Stonewall liberation, Some of My Friends… allowed viewers to spend Christmas Eve at a Greenwich Village gay bar, documenting various gay and trans individuals over the course of the evening. Equal parts bawdy and tragic, the film expressed something genuine that feels at odds with what is usually expected of “the Christmas movie.” Christmas films are ultimately comfort food, marketed primarily at older white women, and offering a vision of an uncomplicated world where attractive, white heterosexuals work out their differences to arrive at a fundamentally conservative image of “the happy family” — a romantic union in an idyllic setting. All conflict is resolved by the end of the film, all difference — assimilated. This year’s group of queer Christmas films struggles with the question of whether to adjust to this tradition or to rebel against it. While some are marketed to the same audience as traditional Christmas films, others grapple with how to squeeze the queer experience into the mold of the genre. While not altogether successful, these films will hopefully lead to a broadening of the genre. Overly white and centered on small-town America, Christmas films could benefit from more minority presence. In the future it would be good to see more authentically queer stories that balance the desire for a romantic setting with a more gritty, everyday portrayal of the queer experience. Where is the Christmas film for LGBT people who don’t have a family to go home to, but instead have a found family? Where is the trans Christmas romance? And how many more Christmases will it take us to get there? 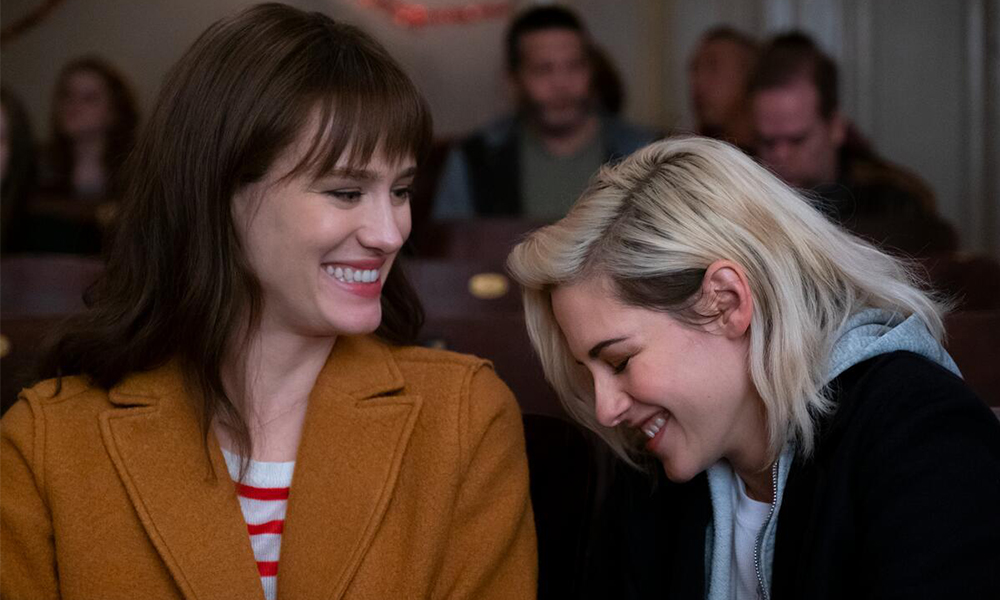