“I used to know an old man who could walk by any cornfield and hear the corn singing. ‘Teach me,’ I’d say, when we’d passed on by. (I never said a word while he was listening.).” This is how Byrd Baylor’s 1978 children’s book, The Other Way to Listen, begins. We meet our curious female narrator immediately and simply, and an old man, who we later learn is not mystical. There was a woman, he tells the narrator, who could hear cactuses blooming. “‘Just tell me how you learned to hear that corn,’” she asks, but, like the impossible advice to let go during meditation, it takes both surrender and intent, and lots of time — nearly 30 pages’ worth — for her to hear the murmuring of the hills, the musings of a lizard. The story is spare and the illustrations, drawn by Peter Parnall, impressionistic, full of negative space and rendered in just three colors (black, deep yellow, and a mustardy orange). Perhaps because it is a book about quietude, its makers have left plenty of room to daydream.

For adults, children’s books are a mnemonic pleasure — the comfort in knowing what happens next, the thrill of reabsorption. But I didn’t read Byrd Baylor as a child. The Other Way to Listen was gifted to me by a boyfriend, who thought its simplicity might quell my anxiety. When I babysat, I read it to kids in my charge. Later, I read it to a different boyfriend, then bedridden with a severe illness. The old man, explains the narrator, “was so good at listening — once he heard wildflower seeds burst open, beginning to grow underground” that he was never surprised by the gentle cacophony: “‘It seemed like the most natural thing in the world.’” Most people have the innate ability to hear — they simply “‘don’t take the time you need for something that important,’” he insists. Because he can’t teach our narrator to listen — only the birds, weeds, and trees themselves can — he instructs her, “‘Go get to know one thing as well as you can.’” Parnall draws her face into branches, the crests of mountains, the wind. A bundle of leaves in her arms elongates toward the preceding page, gigantic. When the hills speak to her, it is both “the oldest sound” and “the most natural thing” in the world.

Baylor has written many books like these, often illustrated by Parnall: The Table Where Rich People Sit (Mountain Girl learns to measure wealth in her access to flowers, her loving arguments with her family, and “the pleasure I have wandering in open country, free as a lizard”), Everybody Needs a Rock (in which rocks are as valuable as necessities), I’m in Charge of Celebrations (a girl celebrates the comforts afforded by the high desert: sleeping outside, dancing in a Dust Devil). In Baylor’s tenderly didactic parables, about time and value and the sentience of the land, her narrators are typically girls, and they are always mystified by and indebted to the desert, which becomes a character worth meeting — the density of its heat, the potentiality of its horizon.

Baylor is 95, herself a desert-dweller in Arivaca, Arizona, where she lives on 35 acres, entirely off the grid (she prefers typewriters). Early in her career, she wrote for adults, but pivoted by the 1960s, explaining, “I like children’s books because in them I can talk about the things I think are important.” If they’d ever felt cloying — well, they are for children, and presumably the sweetness is undercut by the real-life Baylor, whose kindness comes without sentimentality. A 2013 New York Times article about No More Deaths — an Arizona-based organization that provides humanitarian aid to immigrants during their perilous crossing between the US and Mexico — mentions that Baylor had been helping migrants for years “by distributing food and water to those who crossed her land.”

In Yezmin Villarreal’s 2014 story, “The Byrd of Arivaca,” she interviews Baylor and several No More Deaths volunteers, who explain that Baylor’s door is “always unlocked, so people will help themselves to water or food inside.” When Baylor called the Border Patrol seeking medical assistance for a severely dehydrated woman — then asleep in Baylor’s bed — she was warned housing a migrant was illegal. “You better get somebody to come and arrest me too, because I’m not putting her out of the house,” she’d said. In 2004, she permitted No More Deaths to set up a home base, known as the Byrd Camp, near her property, “because ‘we were all doing the same thing, more or less.’”

It’s probably credible that the simplest ideas are the truest, and that the truest declarations come from children, but the idea’s repetition has made it feel like an aphoristic platitude. Still, I wish to inhabit Baylor’s written world: I want compassion to be valuable, for wealth to be measured in ineffable things; I want to devote a full twenty minutes of my concentration to a patch of grass. I want this especially now, when my whole self feels groomed to be financially valuable and consistently busy. Those kinder moments have dwindled, due to both their perceived uselessness and diminishing accessibility: rare, perfect ecosystems are paved over even in Miami, where I live, which is as teeming as Baylor’s desert. I have less time, or I’m made to feel like my time is better directed at generating a better version of myself. Either way, the effect is the same. It’s hard to listen to the quiet singing of a hill, the bloom of a plant. Meanwhile, the actual plants disappear.

Recently, No More Deaths was in the news, when Scott Warren, a teacher and an activist, went on trial for providing food and shelter to two migrants: Jose Sacaria Goday, from Honduras and Kristian Perez Villanueva, from El Salvador. For illegally and secretly housing them, said prosecutors, he faced up to 20 years in prison on charges of harboring and conspiring to transport undocumented immigrants. The case ended with a mistrial, conspiracy charges dropped, though prosecutors plan to retry him in November on harboring charges. It’s a mercilessly punishing cruelty that conflates protecting and preventing the deaths of two strangers with criminality. In June, Warren delivered a statement to the press, in light of what he described as the “humanitarian crisis” of the targeting of undocumented people and the criminalization of solidarity. “Today, it remains as necessary as ever for local residents and humanitarian aid volunteers to stand in solidarity with migrants and refugees,” he said. “We must also stand for our families, friends, neighbors, and the very land itself, most threatened by the militarization of our borderland communities. I have received enormous support from family, friends, lawyers, and my community. But the other men arrested with me that day have not received the attention and outpouring of support that I have. I do not know how they are doing now, but I desperately hope that they are safe.”

I reread The Other Way to Listen recently, after hearing Warren’s statement, and intuited it differently this time, as if it were a corrective to the collective neglect of the environment, and of each other: the narrator is warned by the old man that if she thinks she’s better than anything — or anyone — she’ll never truly hear them. This, I think, might be Baylor’s truest intention. Decamping from late-stage capitalism by hiding in, say, the desert, feels seductive and youthfully irresponsible. To me, Baylor personifies the best middle ground. She seems to have absconded from only the loudest places, continuing to write beatifically magic books and measurably support her community, broad and borderless. The narrator, surely, learns to listen: “All I know is, suddenly, I wasn’t the only one singing. The hills were singing, too. I stopped.” 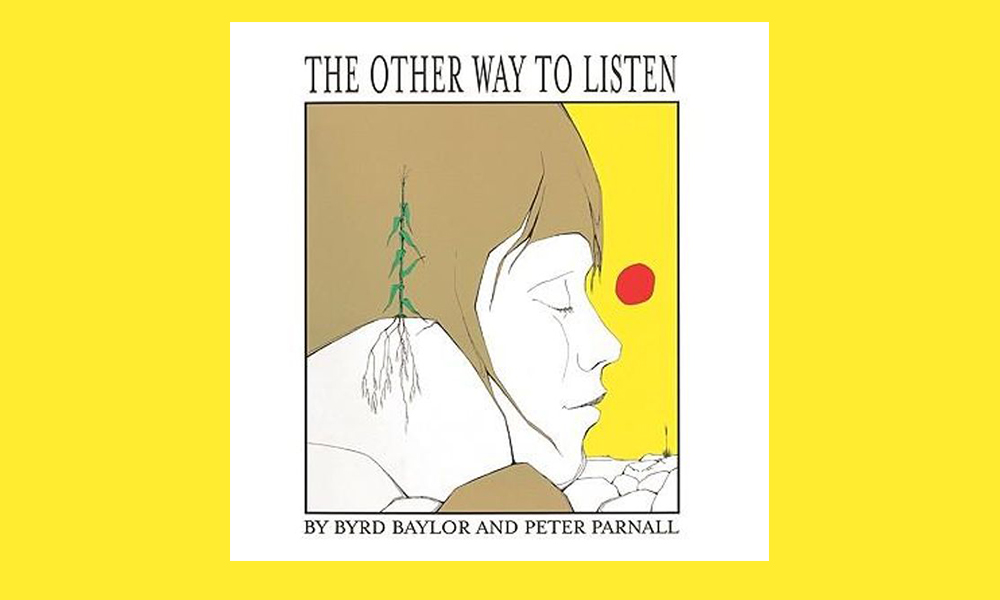