John Gosslee’s Fish Boy (Nomadic Press, 2018) has a nucleus: a stanza in the center of “I Watch the Forest Grow Out of the Body,” which is itself just about halfway through the book. Separated by asterisks on either side, this passage is a strange intermission between two profound and distinct narratives. It’s out of time, out of space, dazed and self-referential:

It’s the first time I open a door, look out a window,
drive, eat an orange, kiss, open the mail, sit in the theater,
touch another body, shower, brush my teeth,
have a good dream, smoke, lie,
since my father died.

Several of these moments are expanded upon in other poems throughout the collection, but this stanza serves as an illuminating microcosm of Gosslee’s approach. Grief has gravity. It is a pulsing vacuum at the heart of a mourner’s day, trapping smaller bodies into its orbit. And Fish Boy is primarily interested in the particulate effects of grief, the emotional divots it leaves behind.

The first line in the book is, “Today is the day of finishing little tasks.” It refers, in context, to the attempts at rehabilitating Gosslee’s father after a stroke. But it can also be applied to the poet’s own recovery process, both from the eventual loss of his father and from his attempted suicide as a teenager. Through Fish Boy’s focus on seemingly superficial or commonplace activities — gambling, driving, dancing, drawing money from an ATM — we begin to understand how “little tasks” can become meteoric achievements in lives that have been touched by tragedy.

And coating every image is an implicit parallel between father and son, one that is equal parts melancholy and gratitude. We follow both figures through devastating illnesses, romances and conflicts, daily minutiae. And most importantly, we see them care for one another with tenderness and exhaustion at the nadirs of their lives. In “Prison Body,” after his father is incapacitated by a stroke (he “speaks like a record in reverse”), Gosslee zeroes in on the intimacy of brushing his hair. That dynamic is inverted in “My Beautiful Father the Fire Bird,” where the last years of the father’s life are evoked alongside his service in Vietnam and his time nurturing a suicidal son back to some semblance of physical and mental wellness:

He held my wings in one hand,
the scissors in the other
and after the clip I beat my wings
so much harder to fly.

“My Beautiful Father the Fire Bird” is structured as a series of vignettes, each of which is laced with avian imagery. The final stanza considers language (and poetry) as a process of mastication and regurgitation from father to son:

And father, people have begun
to love my words, chewed so hard
in your mouth, dropped into mine.

It’s a rich idea, that art can be an intergenerational transfer between bodies, and an uncommonly true and comforting approach to loss. To some extent, we’re all museums to our ancestors. Some parents provide us with genetic matter. Some nourish us with ideas, emotions, and culture. Others encumber us with traumas. But all parents, absent or present, kind or cruel, genetic or adoptive, are ghosts in the bodies and minds of their children.

And despite its elegiac approach, Fish Boy is a committed and passionate dive into the wonders of the hereditary. One of my favorite stanzas comes at the beginning of “Terminus,” a poem that grieves with a type of hard-won pride:

I have my father’s logic of the wild field, warm tongue,
where to place the axe to make a garden, a windmill,
a three-way circuit.

The book is full of moments like these — beaming reflections on inherited wisdom and strength. Gosslee regularly discusses his body and mind as products of both lineage and cultivation. His father remains, very literally, inside him.

So how much of ourselves belongs to us and how much belongs to our parents? How does that equation change when we rely on our parents to survive? Or when they rely on us? When they’re gone, do we further find or further lose our identities? Can we do both at once?

Gosslee, like any of us who have spent days of our lives in hospital rooms holding hands with our loved ones, is concerned with the economy of caretaking. We make little mental scorecards of what we’ve given and taken, what we owe and what we’re owed. It’s a maddening and irrational folly, but it’s a part of the process. I recognize it most in “After the Geese,” in which the poet envies the surface tension of a body of water for supporting the weight of geese “without reward or effort.”

But the effort, of course, can be a kind of reward. “Little tasks” can bind us together and inch us closer towards wellness. And after reading Fish Boy, I’m not sure there’s such a thing as a little task at all. 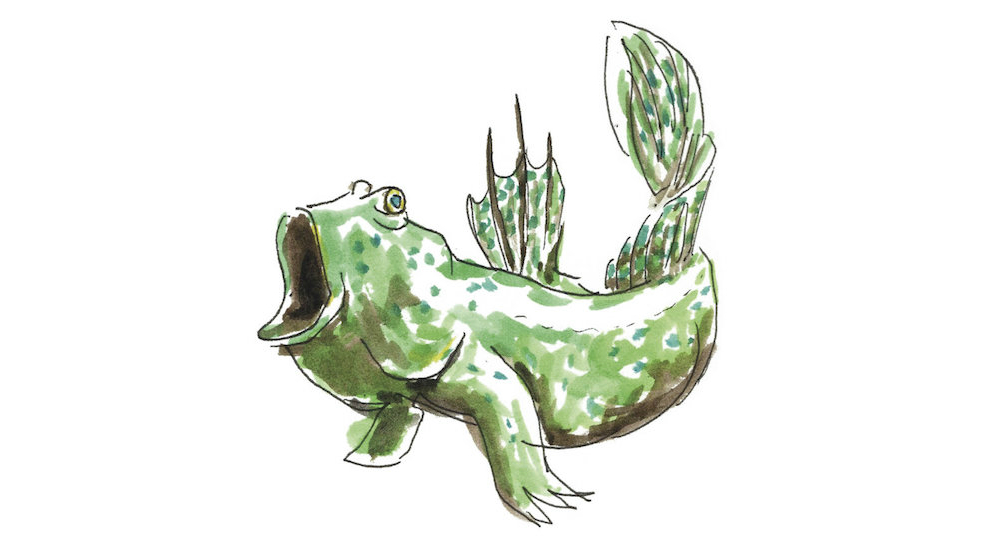