In a brief but revealing moment in Netflix’s new hit series The Chair, the disheveled literature professor Bill Dobson (portrayed by Jay Duplass) scurries into his classroom late and scrambles to set up his computer. “One second,” he mutters, as his grad student Lila Ramos (Mallory Low) rushes forth with a fresh pile of syllabi and an unreciprocated greeting. “Where’s my dongle?” Bill asks. “Your dongle’s in your hand,” Lila replies. “How’d that happen?” “I put it there.”

Much has been written about The Chair — what it gets “right” (its critiques of academia’s rampant racism, sexism, and ageism; Sandra Oh’s sheer brilliance; David Duchovny’s pitch-perfect cameo); what it gets “wrong” (Pembroke English’s relative privileged status compared to most US humanities departments, the show’s own ageism, the virtual omission of adjuncts from the story); and whether we should even be evaluating its “realism” at all.

Yet, Lila, the dongle-furnishing grad student, is strangely (though perhaps tellingly) absent from much of the Chair discourse. Despite her status as a relatively minor character in both the show and the Pembroke English Department, however, I argue that Lila’s storyline in fact reflects one of The Chair’s most important, if far too subtle, critiques of contemporary academic labor conditions. Though Lila appears in only a few scenes, those in which she does appear — as well as those from which she is conspicuously absent — reflect the precarious position of the majority of academic workers in today’s universities. Very few PhD graduates will ever have a shot at, much less hold, tenure-track or tenured positions at elite R1 universities like Pembroke. Yet, as Lila’s narrative reveals, these academics-in-training must nonetheless perform much of the logistical and emotional labor to keep their departments and professions afloat — a dynamic exacerbated tenfold, of course, for women of color like Lila.

Lila is mistreated at almost every turn. One of the only graduate students (seemingly the only graduate student?) at Pembroke, Lila is excluded from department meetings (fairly typical) and welcome back parties (less typical — my graduate department always included PhD students at such events). Even before his ill-conceived Hitler salute sends Lila’s graduate career into freefall, Bill is a less-than-mediocre advisor to her. After the dongle incident, he introduces Lila to his “Death and Modernism” students, mentioning her “brilliant dissertation… which [he] will finish reading soon.”

Things get much worse for Lila, of course, following Bill’s meme-ified gesture and the ensuing campus uproar. Bill’s bad behavior means that his letter of recommendation — a crucial component of the academic job application — could be virtually meaningless. (“My friend Sarah at Wisconsin, her advisor got accused of harassment,” Lila worries to Ji-Yoon, “and his recommendation ended up being worthless.”) Given that tenure-track faculty positions at R1 universities like Pembroke, especially in Lila’s field (modernism), are virtually nonexistent — as of this writing, this year’s MLA Job List contains no calls for a modernist literature specialist — Lila cannot afford (literally, given her “mountain of student debt”) such a blow to her application portfolio. Even aside from the controversy, one wonders how thorough Bill’s letter of recommendation for Lila would even be. Though he seems excited about Lila’s research  — after reading her dissertation in one, seemingly frenzied, sitting, he calls his publisher to recommend her as “the real deal” — the show gives us little evidence that Bill would be able to muster the focus to submit recommendation letters carefully and on-time.

Nor does Lila seem to have much meaningful support from the other faculty members in the department. While Ji-Yoon is sympathetic to Lila’s situation, Lila is (perhaps understandably) not Ji-Yoon’s priority. Even when Lila furiously tries to get ahold of Ji-Yoon to warn her about Bill’s salute, Ji-Yoon misses all of her calls and texts and later hangs up on her mid-conversation. (“I know it seems like I’ve been ignoring you,” Ji-Yoon later tells Lila, “It’s just been chaos.”) But Lila’s chaos and Ji-Yoon’s chaos are different. Lila, we might imagine, is plagued by immediate and personal concerns about her own professional and financial future. Will she be able to finish the dissertation she has spent years on? Will she ever get meaningful feedback on her research? Will the funding from her teaching assistantship be in jeopardy if Bill’s class is canceled? Will she even be able to pursue her already-slim chances at academic employment? The “life boat” that Ji-Yoon offers Lila — a new dissertation advisor, Dr. Barron — is, after all, a leaky one. “I sent him a paper my first semester to see if he’d give me some feedback,” Lila comments, “Never got a response.” In some ways, it is Lila whom Bill’s mistakes and the department’s dysfunction affects most materially. After all, Ji-Yoon and most of her colleagues are tenured, and even the untenured Yaz has potential offers from top-tier departments at Chicago and Yale.

Even Lila’s supposed “triumph” at the end of the show — the potential (and indeed exciting) promise of an academic book contract (“I showed it to my editor. She wants to talk ASAP,” Bill writes on a Post-It affixed to Lila’s manuscript) — feels a bit unsatisfying. Aside from the fact that this is not how academic publishing works, there is also, as many scholars and writers will attest, many a slip between “talking” to an editor and having one’s work actually under contract with a press. (Nor, unfortunately, does a book contract even guarantee an academic position nowadays.) As Alessa Dominguez writes for Buzzfeed, “In the end, Lila smiles when she sees Bill’s note in support of her dissertation. The writers would have done well to talk to current graduate students to gauge their actual feelings about academic labor politics.” At the risk of applying too much close reading to this moment, we might interpret the Post-It notes (insecurely affixed with impermanent adhesive) and the snail-mailed manuscript (subject to the vicissitudes of the postal system) as evidence of the rushed nature of Bill’s feedback (one note reads, vaguely, “expand on this”), the instability of his commitment to Lila’s scholarly life, and the tenuous nature of the publication promise. This sequence also seems to be more in service of the show’s curious insistence on the rehabilitation of Bill’s character than of any kind of victory narrative for Lila. As viewers watch Bill furiously scribble on a manuscript, we at first think he’s going to help the undergraduate Dafna, but instead, it turns out, he’s reading Lila’s dissertation. This seems like a sweet moment, until we remember that reading Lila’s dissertation is literally one of the most basic requirements of his coveted job, one that he has until now failed to accomplish.

However, The Chair also tells a more nuanced story about Lila’s situation (and that of many graduate students in the humanities). At the same time that Lila must endure the faculty’s aloofness (at best) and misconduct (at worst), she also has no choice but to support them and in fact must often bend over backwards to do so.

Though Lila’s day-to-day grind involves executing the senior faculty’s most basic job functions, the work she performs also goes well beyond printing syllabi and managing classroom technology. Much of it is also deeply emotional labor. Many graduate students who have served as teaching assistants will recognize the pure agony Lila experiences as she paces awkwardly in front of a crammed lecture hall, waiting for Bill to show up late to class. “Are you coming? It’s 9:50?” she texts, her fingers hovering over the thread until she ensures the message has been delivered. As the shot lingers on Lila’s phone, viewers see that Lila has also texted, “BTW, I’ve printed out all the materials for class. Let me know if there’s anything else you need.” Further up the screen, we see that Bill has typed a cursory “Thanks” for some other task, to which Lila replied, “Thank you!” Even the rhetorical difference between these two text messages — Bill’s casual, unpunctuated “Thanks,” in contrast to Lila’s complete, exclamatory phrase — reveals their uneven levels of investment in the exchange, as well as the odd (but, to many, recognizable) position Lila is in of having to thank Bill for her work.

Lila also shoulders many of the department’s affective burdens when Bill’s salute first goes viral. When the meme starts to circulate, the Pembroke English faculty are at a welcome back party (to which Lila is not invited). When Lila learns of the meme, she spends the evening desperately trying to get in touch with Ji-Yoon and Bill, both of whom have misplaced their phones or left them at home. While her professors are wining and dining (and later even bowling), Lila is in crisis-management mode. Even the next morning, Lila struggles (and fails) to get Ji-Yoon’s attention to inform her of the controversy swirling around the campus.

When Bill is suspended, Lila must notify Bill’s students, help him distribute flyers for his ill-advised “town hall,” and, probably, grade any outstanding student papers. (Plus, let’s be honest, it definitely would have been Lila — not David Duchovny — who would’ve had to take over “Death and Modernism” while Bill was out.) At the same time, Lila must also perform the extensive care work Bill requires as he grapples with his new reality. When Bill balks at the phrase — “postponed indefinitely” — that Lila has written on the board, Lila jumps through rhetorical hoops to reassure him that “indefinitely” “just means until further notice.”

Lila’s emotional labor is again called upon when a student reporter asks her to comment on Bill and the campus unrest. The reporter peppers her with questions and pleas: “Are you coming to protest?” “What made you pursue Bill Dobson as a mentor in the first place?” “I think people would really appreciate hearing your point of view.” Lila is visibly uncomfortable, averting her eyes and walking quickly across the quad in an attempt to dodge the reporter. Her agony is understandable. She cannot speak up, lest she betray Bill or the department, in whose hands her professional fate lies. Yet, Lila also knows that if she doesn’t speak up, she risks appearing complicit in Bill’s problematic politics, which would also threaten her reputation among students and potential employers. (Never mind where Lila herself lands on the issue; she doesn’t seem to have the time or headspace for her own feelings to be much of a factor.) After she lets slip to the reporter that Ji-Yoon has given her an “earful” about talking to the press — a comment that spurs The Pembroke Daily to accuse Ji-Yoon of issuing a “gag order” — Lila faces even more emotional turmoil. Lila’s anguish is palpable when she sheepishly climbs the stairs to Ji-Yoon’s office to apologize for the comment, again performing extensive calisthenics to negotiate her vexed position in a department — and a profession — that makes little room for her.

Thus, while The Chair at times seems out-of-touch with many of the realities of academic labor — most English departments bear little resemblance to Pembroke’s, with its Gothic architecture, wood-paneled offices, and majority tenure-track or tenured faculty — it does grant viewers a crucial, if far too understated, glimpse into the painful circumstances of many academics-in-training and the future of academic life (a future that is, in fact, already here for most of the professoriate). As Christina Katopodis writes in Hybrid Pedagogy, adjuncts (and to this I would add graduate students) are the “Ghosts of Christmas Yet to Come in a modernized Dickensian nightmare, modeling for our students the lives of the overqualified and under-compensated professionals who live gig-to-gig.” The chair is already broken, and while people like Lila will work tirelessly to try to fix it, they might never get a seat at the table. 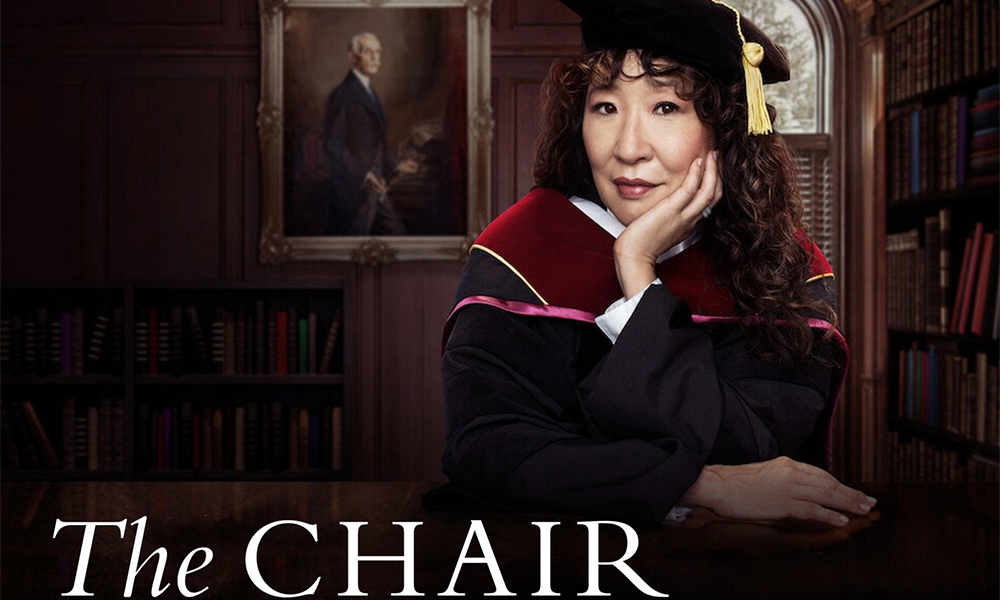