Jake Marmer’s new poetry collection, The Neighbor Out of Sound, utilizes Jewish mysticism and wordless Hasidic rituals called nigunim as a way to bring the reader into the world of the known and unknown. One of Marmer’s strengths is that he remains curious and open when faced with the incomprehensible and invites the reader to remain so as well. In “Painter’s Nigun,” Judaism, the perils of artistic endeavors, and philosophical inquiry collide. The poem rapidly accumulates like an impressionist painting does from afar, conjuring the imagination.

Later in the collection, Marmer travels back in time to the Russia of his early years. At first, he had very little knowledge of being Jewish or of anti-Semitism. In this section, his father sits him down to explain who they are: “it’s about this word, repeated in the song’s chorus. Not a nice way of referring to Jews. Also: we’re Jews.” With this revelation, Marmer initiates a series of ancestral, incantatory, and serious poems, softened with humor.

In “Sermon Over the Empty Dishwasher,” the inanimate object comes to life and is compared to the mysteries and failings of the human body: “Someone left the interpretation machine running / and it’s the hungriest motherfucker in the manifest world / I watch the tubes choke on plain air / its dry-heaving rhythm, the secret life / of our to and fro.” Similarly, “Shalom Aleichem: A Remix” melds puns and classic prayer: “peace to you glamorous angels dressed in fractured mirrors of grammar // peace to you eight-headed angels of cosmic immigration anxiety, there’s nowhere to go…bless me overloaded midnight distracted angels of avoided answers.” Whether satirical, political, or jocular, Marmer keeps us on our toes until the last line. He has a knack of making the ancient or traditional seem modern, risqué, and playful, as if he riffed this on the spot.

But Marmer is also a philosopher. In “The Law of Returning Lost Objects”: “dollar bills flying down the street is not considered hope / desire for restitution no longer / has an object that be perceived as whole / consciousness cannot wrap / around it as it does around experience.” This brilliant poem centers on the notion of inheriting memories that were not your own as a result of coming into contact with an object:

when is an object considered lost?
when there’re no identifying marks
money for instance, got no memory
of the lost owner
and neither does language—

Everything in this poem and this collection centers on the power and the sound of the word expressed in prayer and in the laws of the bible. In this world we have lost who we are, we have lost our material objects, we have lost what has and will sustain us:

the gate was collapsing even before it was lost
and if you wonder about the lost
righteousness, repeat
the word till it comes
loose in your mouth
“righteousness”

Still, Marmer sees the value in prayer. In “Everywhere,” his own son relays what he has learned about God: “Almost three years old, on the toilet / he says: god is everywhere / but you can’t see him, papa; / the thing we fought for / came back to bite us—.” After hearing this, he recalls the vague explanation that his own father gave him: “my own papa said mysteriously: / the universe / has been around since / always / (and I’m crunching Ukranian leaves / underfoot / trying to feel it)”.

In closural poems such as “Winter 2013/2014,” Marmer conflates memories of family, history, and writing: “I may remember this as the coldest winter ever / and revolution in Ukraine / and my daughter’s first month on this planet / salivating smiles in the middle of the night.” Earlier the speaker addresses his very real economic trial and tribulations during the course of a year: “when I stopped writing, writhing / when I understood our faux middle / class status, the poverty, / and paid much interest / maxed out credit cards / and worked…” Here, winter is the container for incongruences: hardship and joy, poverty and abundance; hopelessness and faith.

Marmer is a master of multiple perspectives. He speaks about what he knows and doesn’t know with ease and confidence but in a language all his own. He’s a storyteller, an improvisational jazz drummer, a mystic Jewish Beatnik-esque poet who, while falling into abstraction at times, can connect disparate ideas and language about authenticity, individuality, and his religious journey. He leads you in and out of the ancient and modern neighborhood of his mind. Jake Marmer’s The Neighbor Out of Sound sings us honest songs that take us to the land of remembrance without forgetting the present and future. 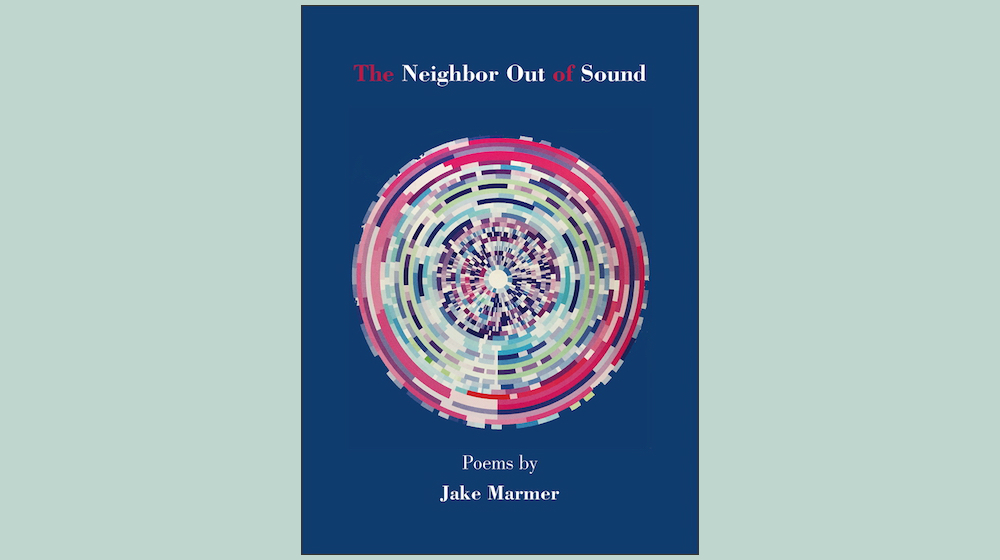