The Guatemala of Jayro Bustamante’s horror film La Llorona is a country at once mythic and historical. In the film, a retired general is convicted of genocide, just as Efraín Ríos Montt was in 2013. The courtroom scenes bear an uncanny resemblance to recent post-war trials. Nobel Laureate Rigoberta Menchú is in the audience, and witnesses cover their faces with woven veils. The attorney in the film has the same Evangelical oratory style as Ríos Montt’s lawyer, and just like Ríos Montt, the fictional general, Enrique Monteverde, escapes justice on a manufactured technicality. The film’s major departure begins afterward, when Alma, a Maya Kaqchikel woman who was killed with her children during the war, appears at his doorstep disguised as a maid.

I was eager to watch Alma mete out her revenge, and suspicious of my eagerness. The ongoing genocide denial in Guatemala bears down hard on the idea of art as vicarious justice. During the 36-year armed conflict ending in 1996, more than 200,000 people were killed or disappeared, the majority of whom were Mayan civilians. But official repression of this history is blatant and entrenched. Propaganda, censorship, and violence derail public discourse. During Ríos Montt’s trial, for example, a cabal of genocide deniers took out a 20-page insert in the Sunday edition of a major newspaper. The mere mention of genocide can be intensely polarizing. The right-wing elite are in the habit of spinning Mayan demands for justice as vengefulness, and of conflating human rights activism with communism and terrorism. So what would it mean to re-imagine history in a context like this? What would enacting a desired past do for the film’s audience, and to us?

While Alma is La Llorona’s most powerful catalyst, much of the action centers on the privileged women of Monteverde’s household. As the family compound is surrounded by protesters and their bodyguard forbids the family to leave, the political drama assumes a domestic pitch. The general’s wife Carmen, his daughter Natalia, and his granddaughter Sara each exist in their own state of denial or ignorance about the rapes and killings Monteverde ordered in the 1980s, and each of them moves, or is pushed, through her own kind of reckoning. The nature of their haunting is slow, humid, elemental. “The guerilla has a spy in the house,” says Monteverde, and the women think he has Alzheimer’s. They fail to see that they are all pursued by collective grief and rage. Their transformation, especially in the case of Carmen, feels involuntary, something willed from outside.

After the trial, Natalia sits talking with Carmen. She wants to know how much her mother knew about the violence, but Carmen dodges every question.

“Mom,” says Natalia, “I really believe nobody is capable of making up such things. You have to go through them to tell them like that.”

“Which side are you on?” asks Carmen. “When did you turn into a lefty?”

Throughout the scene, Natalia is pouting and inert, like a kid forced to wait too long at the table after dinner, even as she’s engaged in the most basic act of adulthood, openly questioning the official narrative. Or maybe it’s an act of adolescence — it must be hard to grow up properly surrounded by all that luxury. But what is striking about the scene is the way it cuts against the expectation that the act of questioning power is always noble. Natalia comes off more like a child, one who realizes she’s been lied to and wonders how much she let herself be tricked. Her stillness is a regression, plus the genteel habit of treating unpleasantness with maximum discretion. But it’s also interesting — because what if a bent toward justice can start as a sullen thing, as privilege is surrendered by degrees and denial gets more and more difficult, even though the new awareness retains some of the old ugliness for a while?

Sara is young, receptive, affectionate. For her, the transition is easier. She and Alma play checkers, they practice holding their breath in the pool. Before long she’s asking her mother if she can grow her hair long like her maid’s. Despite the constant noise from the protesters, she grows to love their music. She has little to lose in the way of power and no real sense of what she might be giving it up, but her identification with Alma comes with its own risks.

With Carmen, the change is most wrenching, a battle whose demands are physical, psychological, and spiritual. At first she’s the picture of repression, hair pinned back as she leads a pre-trial prayer circle of upper-class women, sounding a little like a general herself as she orders God around in a tight whisper. But by the end of the film, she is wild and unwound, and power is located elsewhere, coming at her from all sides.

Whiteness, and the illusion of whiteness, is key to power in Guatemala. One of the witnesses at the Ríos Montt trial was the sociologist and historian Marta Elena Casaús Arzú, an expert on the racism of the elite, white-identifying families who have been in Guatemala since the Spanish. As a white American woman, I watched Carmen’s transformation with intense interest, and intense discomfort. Her struggle embodies a warning whose power often stays trapped in generalities: Your privilege has limits. The shield of your whiteness is flawed. Expecting, consciously or not, that white men will keep you safe is a mistake. Seeing this acted out in vivid archetype was a bracing and productive disruption, emboldening me against my own denial, hidden as it is under an awareness I’ve cultivated with such care that sometimes I wonder what, and who, it’s really for. It was the film’s implicit, maybe even unintended demand for my own accountability that I found chilling, and inspiring, in equal measure.

But I was never truly scared, not in the way I would have expected from a horror film. Devastated, yes, by the nightmares Carmen has, but that was different. I asked Bustamante about this when I reached him in Guatemala by phone. Was I misinterpreting the film?

Not exactly, he told me. He also considers La Llorona a sociopolitical drama wrapped in magical realism. The horror designation was in part a strategic decision to expand the audience for the movie.

“Instead of avoiding labels, I tried to add them so the film would become more and more inclusive,” he said. (His comments are translated from Spanish.) Before he began work on the film he conducted a study of Guatemalan moviegoers that showed horror films and superhero films were especially popular. He saw an opportunity in the commercial tastes of a divided public.

Guatemalans who acknowledge the genocide also feature strongly in the film, just as they did in the real-life trials. Among them were a number of rape survivors, witnesses from rural farming communities, speakers of Ixil and Kaqchikel who were poor and often spoke little or no Spanish. Many of these women used their traditional weavings as a kind of courtroom veil. The reasons were various: safety, solidarity, a guard against stigma. In La Llorona, the fronts of the veils are a transparent blue, revealing their faces. The film takes its name from a ghost story that also functions as a cautionary tale. Those who know the original La Llorona will recognize the effect of the veils, as if the women are underwater, surrounded by floating flowers. But unlike the Weeping Woman, the witnesses are energized by their grief, not submerged in it.

The pandemic arrived in Guatemala four days after La Llorona opened in theaters there and forced the film to premiere via streaming in the US. It was strange to access a political film on Shudder, a streaming service for horrors and thrillers and suspense, but to be parochial or prescriptive about genre is probably missing the point. When safety is something to be bought or born into, all fear is political. Bustamante has managed to break a major taboo and reach audiences in Guatemala and internationally. La Llorona succeeds because it demands to be taken on its own terms, as a work that exists both within and outside of history, made of characters who are archetypes rather than biographies, even if, at moments, some of them seem like facsimiles. The film is disorienting but also visionary, aspirational but also denunciatory. Its contradictions make doubt a requirement for entry into the story, rather than a barrier to understanding. Watching the film, some shots were so dark I found myself leaning forward, trying to peer through the screen, not quite sure what I was seeing, whether Monteverde was supposed to be the ghost or the ghost hunter. It was a pleasure to realize I was losing my sense of who was supposed to have power. 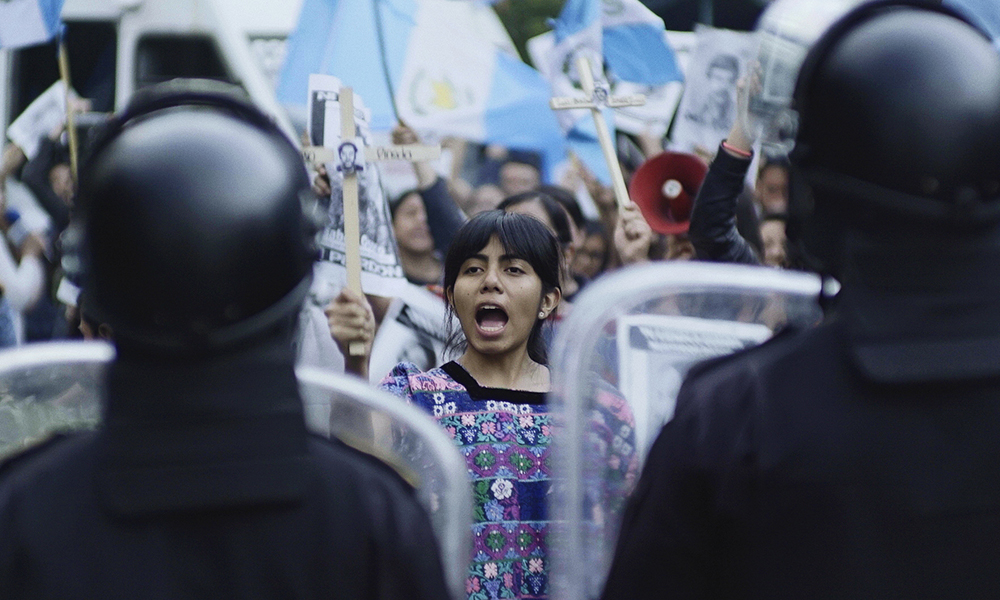