It was branding day for the Wrights. While most of the family pitched in — tagging, branding, inoculating and castrating the calves — the youngest kids played around the camp. One minute, three-year-old Cruz was on top of a yellow pony, and the next, he had landed face-first on the ground. It was a serious injury: the boy was airlifted to Salt Lake City, put into an induced coma and placed on a breathing machine, and taken into surgery.

When Cruz finally came home from the hospital, writes John Branch, he was “as feisty and fearless as ever.” And within a week — with some help from his dad — he was back on the pony.

In The Last Cowboys: A Pioneer Family in the New West, Branch introduces us to the Wrights — Mormon cattle ranchers with a formidable talent for bronc riding. Their tale is gripping and original. But it’s the character of this family — their grit, their remarkable work ethic, and their way of nurturing the next generation — that will persist in a reader’s mind.

Branch, a Pulitzer Prize-winning reporter with the New York Times, spent more than three years getting to know this unusual clan. The result is a work that’s rich in detail and which consistently rings true. And he writes in a fashion that’s not dissimilar from how these cowboys live: clearly, boldly, and unambiguously, the sharp edges softened with understated humor and pithy observations.

Bill Wright is the fifth generation in his family to run cattle on the arid Smith Mesa, just outside of Utah’s Zion National Park. He takes his job as head rancher seriously — sleeping for much of the year in an old camper, so as to keep a close eye on the animals, and starting the day with nothing but a hardboiled egg, speared from a jar of vinegar and hot sauce. He and his wife, Evelyn, have 13 children and 30-some grandchildren. Twice a year, he gathers them all together: once for Christmas, and once again for branding day.

As the book opens, Bill worries that ranching may not continue to sustain his family. A persistent drought is taking a toll on the cattle, and there’s increasing competition over grazing lands. Perhaps, he muses, the family’s future lies in rodeo.

In vivid, earthy detail, Branch describes how the tight-knit Wright boys — under the guidance of Bill’s oldest son, Cody — travel the West, competing in one event after the next. Because of the family’s unusual size (Bill and Evelyn’s children span 23 years), Cody’s own sons are roughly the same age as his younger brothers. The young men — each depicted with humor and nuance — coach one another, tape up each other’s injuries, and occasionally pay each other’s expenses. Collectively, they maintain notebooks with comments on all the broncs they’ve ever ridden; if someone’s been assigned an unfamiliar horse, he’ll at least have some idea of what to expect during the ride.

Some of the story’s most memorable scenes take place not during momentous occasions, but in quiet, out-of-the-way places. Each night at the rodeo, before their event begins, the riders gather in the locker room, “mindlessly putting baby powder on their saddle straps or taking a steel brush to the worn, slick inner thighs of their leather chaps,” and changing into their riding jeans — “dingier Wranglers carrying the dirt of a hundred rodeos.” The tension is palpable: one of the cowboys “casually gouge[s] chunks of dried dirt from the heel of his boots with a knife,” while Cody’s youngest son, Spencer, disappears into the bathroom and pukes up his dinner.

Branch captures not just the thrill of bronc riding, but its absolute unpredictability. “Rodeo could be passed down, like a family tradition, like land and manners, but it could spit you out, too, without warning,” he writes.

One could argue that our own era — absent the bucking broncs and broken bones — seems fraught with a similar volatility and chaos. One can’t help but notice, for example, the number of athletes, celebrities, and politicians who rise and fall with meteoric speed. The Wrights, by contrast, are singularly steadfast: tough, persistent, and quietly loyal to one another. Somehow, even as the West changes around them, they fashion a hopeful future for themselves. Branch has given us a real-life story that’s not only compelling, but oddly reassuring. 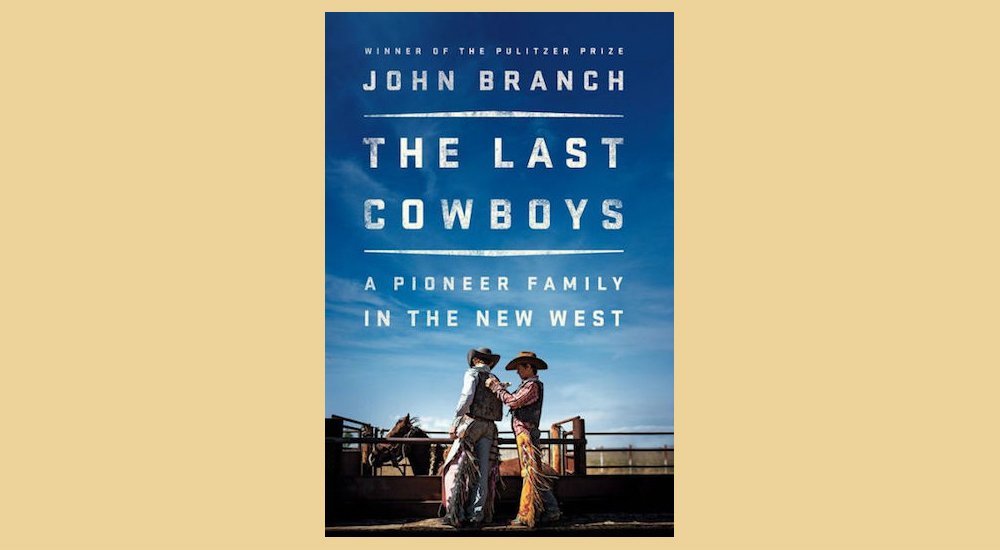