In 1869, in the wake of the South’s loss and economic collapse, Louisiana businessman Edward McIlhenny was living with his in-laws and tending to their garden. There, he brewed the original Tabasco sauce, hawking it around the region. In the 1930s, during another downturn, his son embarked on a business plan of his own: the import of coypu, also called nutria. These 20-pound rodents with long yellow teeth were shipped in from South America, kept in cages, and farmed for fur in an attempt to provide the ailing local economy with a reliable export. Before long, the rodents escaped captivity and settled in the swamps. For a while, things still worked out alright: fur trappers hunted the rodents and reaped the rewards. But then, in the 1980s, fur went out of fashion. Bad news for trappers; great news for nutria. They feasted and fornicated, proliferating unchecked. And as they did, they ate vegetation in the wetlands. When the tide went out, the loosened ground washed away. The coastline shrank.

In the opening scenes of Rodents of Unusual Size, a documentary making its television debut this January 14 on PBS’s Independent Lens, viewers accompany a lifelong Louisianan on his motorboat. He guides us through the wetlands, pointing out the receding grass and rising water. Then, he reveals the culprit: a nutria scampering across the low vegetation. “They breed so much. Every three months, she’s having a litter. There’s no natural predator. The only thing we got now that eats a little bit of ‘em is the alligator, and he can’t eat enough of them.”

“That’s why they got a bounty,” he explains, holding up a nutria’s fat carcass. “Five dollars for this tail.” It’s true: for each tail collected, the Louisiana Department of Wildlife and Fisheries awards a $5 bounty. The aim is to fight coastal erosion, one dead nutria at a time.

The film’s first nutria hunter lost his house in Katrina. His story is not uncommon, thanks at least in part to the rodents. The accelerating loss of land has worsened the effects of hurricanes, making coastal communities more vulnerable. Traditions spring up in response: one scene in the documentary invites us into a church service, where the congregation opens their small missals to the “Prayer for Hurricane Season.” They recite along together:

We live in the shadow of a danger over which we have no control. The gulf, like a provoked and angry giant, can wake from its seeming lethargy, overstep its conventional boundaries, invade our land, and spread chaos and disaster. During this hurricane season, we turn to you, oh loving Father. Spare us from past tragedies, whose wounds seem to refuse to heal with the passing of time.

If prayers feel futile, the congregation could always take matters into their own hands and kill a few nutria. The pleasure of days out hunting in the bayou, the stipend from the government, and the contribution to coastal ecology all incentivize the activity. It’s a beautiful solution. The nutria make great villains, too, with yellowed teeth bared. If coastal erosion had a cuter face, maybe the bounty hunters wouldn’t be out in such force.

Affection for the creatures does sometimes get in the way of extermination. The film introduces us to a nutria trapper on a golf course in New Orleans who tells us that the wealthy tend to protest his presence. Some of them see nutria as “a little golf course ornament.” They actively tamper with the traps. A man with a large house across from the country club tells the camera that he likes to feed them. “Yeah, I’ve been accused of being soft to the little guy, you know. […] But the kids love to see ‘em. And by showing them that kindness to that animal, they may begin to show kindness to another person.”

Other times, human fondness doesn’t save the animals. We meet one man who keeps a nutria as a pet but still hunts them for a living. “I wouldn’t say nutria make a good pet. They require a lot of maintenance, and they don’t socialize with people they don’t know,” he says while bathing the animal in a kiddie pool. “The family, they think it’s funny, because I kill thousands of nutrias a year.” He laughs, tenderly, and rides off on his Harley, his furry partner bungee-corded to the back in a clear plastic box.

Other odd alliances arise out of necessity, and out of hope: state-sponsored conservationists and rural hunters unite over the cause; chefs in New Orleans try to promote nutria as a new authentic Cajun cuisine (“I’m gonna tell them the next day so they don’t regurgitate”); a clothing company promotes nutria as an eco-conscious fur. The animal is used by a diverse cast towards differing ends: young women compete in skinning competitions; a young man pays his way through college by collecting the tails and reaping the government-sanctioned reward; pageant queens strut draped in the pelts. The nutria is made sport, commodity, and status symbol — anything to keep the population down.

At times, it’s all almost too much. The interview subjects wax poetic about life, death, and change as if scripted, and for viewers not from the region the accents and traditions are stranger than could be dramatized. The film is set mostly in Delacroix, Louisiana, a coastal community with at least one sign (shown in the film’s first shot) that marks it as the “End of the World.” A little on the nose, yes? But this is the advantage of documentary film: if the heavy-handed metaphor exists in real life, we can’t put too much of the blame on the filmmakers. The rodents that represent global warming don’t induce eyerolls, but rather giggles. How did the world produce such a vile and apt motif? How can this possibly be real?

The film leaves little room for doubt. See a rodent in the city and you might avert your eyes quickly; here, there’s no escape. The nutria are shown over and over again in endless forms: they waddle along golf courses, lie in piles in the back of boats, lie on their backs skinned in serving dishes, and crawl one by one through their underground habitat. What might flit through peripheral vision or hide in the gutters is brought up and out, over and over again. And by proxy, graciously, the nutria allow another unspoken horror out into the open. They serve as a physical (and mortal) symbol of the changing climate and its struggling ecologies. Both a locus for reflection and an irritatingly persistent material reality, the creatures help bring a difficult concept down to earth.

If only there were always such an easy enemy. 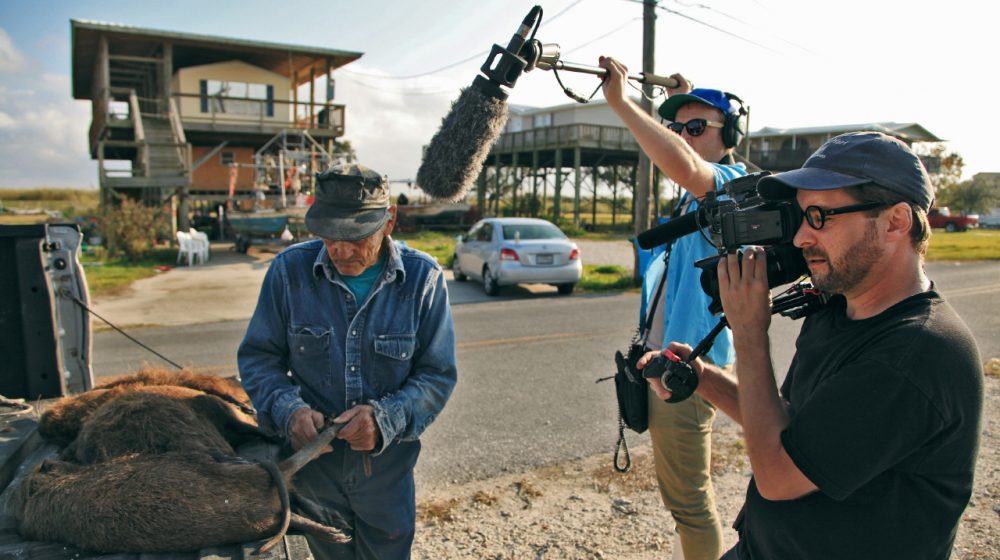