At the end of 2017, Sam Wasson added his book, Improv Nation: How We Made a Great American Art, to the recent stream of odes to improv. The last few years have seen how-to books, laudatory memoirs, oral histories, and documentaries, but Wasson’s book purports to be the first full scale history of the art form. And it’s about time — by now, the mythology of improv is so well-known that the subject was crying out for in-depth treatment.

While most comedy fans have encountered stories about improv on podcasts, late night TV, or in comedy memoirs, the subject remains somewhat opaque. The actual experience of performing, or even watching, improv remains relatively uncommon outside of college campuses and major cities. Most people’s exposure to the world comes from stories about rundown theaters, confused audiences, and strange teachers. As such, improv stays shrouded in a degree of mystery, the humble origin story for great comedians of today. But that romanticized world of pure creative freedom is one that most of us never get to experience.

Even though Wasson’s book endeavors to chart the rise of the art form, he seems too infatuated with its mystery to offer a straightforward account, as if doing so might spoil the magic. Instead, Improv Nation bounces from one richly detailed scene to the next, without ever synthesizing, or offering a coherent analysis of the overall picture. It manages to be a comprehensive, thoroughly researched history of a subject, without ever actually defining what that subject is.

Instead, Wasson justifies his (frankly absurd) claim that improv has surpassed jazz as America’s most popular art by invoking a wide array of very famous characters who are connected to improv, however oblique that connection may be. Bill Murray, Amy Poehler, Dustin Hoffman, Stephen Colbert, John Belushi — certainly the tonnage of their fame exceeds the aggregate popularity of all jazz musicians in 2018, right? Although that may be true, it’s dubious to what degree those names are evidence of the popularity or success of improv itself, and unclear to what degree improv even contributed to these comedian’s fame.

Improv Nation spends hundreds of pages on shows like Saturday Night Live and SCTV (which were never actually improvised), movies like Tootsie (which had an Oscar-nominated screenplay), and the careers of Mike Nichols and Elaine May (who more or less stopped improvising together after 1962). In some cases, this is perfectly acceptable — Wasson paints a compelling portrait of the way improvisation shaped films like The Graduate, and it’s certainly fun to read about Elaine May’s husband secretly stealing reels of film from the studio. But none of this goes very far toward explaining the success or development of improv as its own art form.

The book is at its best when depicting its least famous subjects, specifically the New Dealers and leftists who stumbled on improv as a way to bring theater to “the people.” WPA veteran Viola Spolin, and later her son Paul Sills, developed a series of exercises and theater games, primarily working with children, to bring theater to untrained performers (Spolin didn’t like the term “actor”). From these techniques came the Compass Players, the first improvisational theater group, and later Second City.

Crucially, though, these games and techniques were first developed as tools for traditional theater acting, not as a separate art form. Improv, in other words, was not actually meant to be performed in front of an audience. It also wasn’t meant to be funny. It was meant to help actors explore characters, or to generate ideas that could later be turned into a script. Indeed, the early “improv” performances that Wasson describes — in which performers would take suggestions from the audience, and then retire backstage and prepare scenes — bear little resemblance to what we consider “improv” today, which generally only refers to “spot” improv, in which performers make up scenes on the spot.

This distinction between formats is important, since it gets at what exactly was “invented” when these players invented improv, but Wasson never delves too deeply into the difference, and is often unclear about what type of improv the various groups he mentions actually performed. Similarly, improv’s classification as “comedy” gets only a few lines: “Sills never considered how unleashing one’s spontaneous self — the intended result of his workshops — could be so funny. But that’s what happens when your personal truth breaks out and blows up the socially acceptable one.” Wasson is at times slippery with the distinction between improv and sketch comedy, which won’t just anger comedy nerds, but fails to consider that the latter has roots in traditional theater, vaudeville, and commedia dell’arte, and didn’t just emerge from performers improvising in the Second City basement.

What Wasson is really interested in is not technique or structure, but personalities. Rather than get bogged down in descriptions of how improv shows have actually evolved through the years, he focuses instead on the performers themselves. So while there are certainly words devoted to the development of the Harold, improv’s most durable format, far more are spent documenting celebrity meet cutes and precisely when Mike Nichols and Elaine May were getting along, and when they weren’t.

In part, this is to give the story a Hollywood hook, and a narrative through line — although, as the book goes on and personalities keep getting added, the narrative loses focus. But by focusing so strongly on those personalities, Wasson seems to say that they are all the art form really is. The people on stage matter far more than whatever they happen to be doing. Most people who go to improv shows aren’t worried about the difference between improv and sketch — they just want to see (or become) the next Steve Carell. And most people don’t care about improv because they care about the distinction between short form and long form — they care about it because it’s how Tina Fey met Amy Poehler.

“For their predecessors, improvisation had been a layover, a gig; for Fey and Poehler, it was a calling,” Wasson writes of their meeting. It doesn’t matter to him that both of them also went on to become famous for writing and starring in traditional sitcoms and films, before mostly giving up improv. For him, improv is what matters, because “improv” just refers to whatever pure, commercially unviable art famous people were doing before they sullied themselves with mainstream popularity. Unfortunately, by depicting improv as some mystical thing that precedes success, or runs parallel to it, Wasson undermines his claim that improv itself is a great American art.

Were Wasson to strip away all the nostalgia and the creation myths and famous names, then what exactly would he be left with? If improv is not a great American art, then what is it?

The answer is hidden in Improv Nation, because, for most people, improv is more or less what it was in its early days: a type of training, or school. That’s certainly how major improv theaters like UCB, Second City, or the Groundlings market themselves. Like most schools, those theaters will never tire of reminding you of their famous alumni, and enticing students with the chance at the freewheeling, spontaneous creativity described in Improv Nation.

But, as with other schools, if you look closer, you will see other things, too. You will see gatekeepers with capricious and often unfair standards for who gets to advance. You will see big companies with TV production deals, Madison Avenue partnerships, and corporate training sales teams. You will see business models built on unpaid labor, propagated by the idea that only through unpaid labor can performers truly learn the magic of improv. You will see performances dominated by white men, which is not surprising when a theater doesn’t pay performers and charges thousands of dollars to complete its curriculum. And you will see the insistence that any problems you encounter are not institutional flaws, but this magical art form’s way of challenging you to become great.

None of this, of course, means that improv is not also a great experience that is due for the recognition it is now receiving. It just means that improv is not simply the wondrous, pure art form that Improv Nation depicts. Like all art forms, it has baggage. What makes Wasson’s book frustrating is that it includes so many hints that this baggage was there from the start, even if he seems determined not to acknowledge it.

For example, in all of Wasson’s meticulously detailed account of the format, you’d be hard-pressed to find a single person of color. This may be unsurprising — the entertainment industry’s problems with racial diversity are not exactly a secret — but the book’s bare treatment of the subject is certainly startling. For a book whose title purports to be about an “American art,” the problems of representation ought to at least be addressed.

And while Improv Nation does a good job of illuminating the crucial role of women like Spolin, May, and Barbara Harris, particularly to the early development of the form, it mostly slides past the skewed gender ratios that have existed throughout improv’s history. The book’s treatment of Del Close is particularly telling. Close was an early zealot for improv, and a key figure in its development. Along with Charna Halpern, he helped develop the Harold and co-wrote Truth in Comedy, one of the form’s founding texts. But when discussing Close’s relationship with Halpern, and other women in improv, Wasson doesn’t seem to acknowledge that his behavior was abusive: “He was jealous. Del asked Charna to keep her romances away from him, and she complied, but as Charna got serious with one man, Del picked up the scent, and tried to revise their arrangement. No, Del would not share her.”

Wasson seems to treat this kind of thing as evidence of Close’s mercurial genius, or at worst, the self-destructive actions of a tortured artist. He never seriously explores how such behavior affected others, or set the tone for the improv community. It is not so much that Wasson covers up that community’s checkered past, but that he seems to not see anything checkered about it at all.

But this shouldn’t be surprising: To this day, the improv community treats Close like a symbol of the mystery that Wasson is so enamored of. UCB hosts an annual marathon in his name in New York City, and images of Close’s face cover the walls at all four of their theaters. And based on Wasson’s telling, it’s easy to see why improvisers might be drawn to someone like Close, a guru who wasn’t concerned with traditional success or fame, but somehow became an object of idolatry. It makes sense that they’d see a symbol in a teacher and performer who was domineering, inventive, selfish, collaborative, and unstable. His deification is not particularly surprising.

What is surprising is that Wasson seems to have no interest in pushing past it. His book reflects all the romance and mythology around improv without ever digging deeper into the tensions or challenges underneath. For all his thorough research into the backstories of famous improvisers, his book offers little sense of what improv is like for a typical player, or even a typical audience member. Indeed, it’s possible to read Wasson’s book and still not understand what actually happens at an improv show. Despite all his breathless endorsements of the art form, Wasson is surprisingly easy to distract with the ephemera surrounding improv. Perhaps he has simply bought into the mythology too much, but it’s unfortunate — if improv is as great as Wasson says it is, then it certainly sounds like a real investigation of it would make an interesting book. 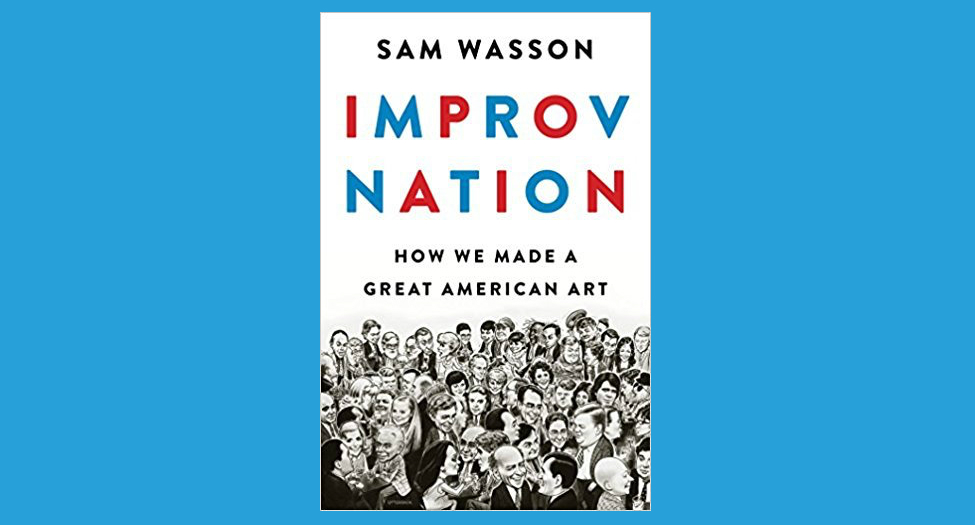