To illustrate the nature of capital and investment, Economist Frank Knight imagined a plant called Crusonia. The fictitious crop grows larger each season using its own seeds of germination; it continually reinforces its own growth. Named after trees in Daniel Defoe’s Robinson Crusoe with similar self-reinforcing biology, Knight’s Crusonia plants are at first glance unexceptional in appearance.

Economist Tyler Cowen leverages Crusonia plants as a rhetorical device in his recent book Stubborn Attachments to demonstrate the powers — and pitfalls — of sustained economic growth. In an analogy that illustrates the primacy of capitalistic growth over other economic systems, the perpetual fruits of Crusonia have so much aggregated value over the long-run that small aesthetic or practical differences in alternative plants have become irrelevant by comparison.

Cowen uses Crusonia plants to develop a framework for our political, moral, and daily lives that relies on maximizing sustainable economic growth and respecting human rights. He argues that our modern-day Crusonia plants are institutions, rules, and preferences that nurture “a more stubborn attachment to prosperity and freedom.”

Rather than strive for a narrowly defined deontological or utilitarian future, Cowen himself identifies as a pluralist, believing “no single value is a trump card which overwhelms all other values in all instances.” He takes into consideration myriad values, such as decreasing poverty, empowering democratic institutions, expanding political rights, promoting the arts, and implementing common sense morality. He believes that high economic well-being, brought about by sustained economic growth, has been shown to maximize the likelihood of all these values across the general population.

Between 1913 and today, life expectancy worldwide has increased from about 34 years to over 71 years. Concurrently, the percentage of people living in extreme poverty has gone from 82.4% to 9.6%, and the global literacy rate went from 26% to 85%. By almost all measurements of life quality, we are significantly better off than we were a century ago. Cowen identifies the underlying cause for all this improvement as sustained economic growth, which in turn has led to sweeping advancements in medicine, greater access to food, and increased access to groundbreaking technologies for many of the world’s poorest.

A devotion to economic growth can conjure up a vision of environmental degradation, inequality, and a generally unrestricted pursuit of material gains. But Cowen’s mission takes all of these concerns into account, with an overall prescription to value the future more than we currently do. With a long-term focus on sustainability, things like immorality, environmental destruction, and citizen disenfranchisement are counter-productive to durable growth.

From a purely mathematical standpoint, small differences can make a big impact in the long-run. The difference between 1% and 2% annual growth is relatively negligible over one year. But over time this gap is analogous to the difference between the economies of the United States and Mexico over the last century. Policies that increase growth even marginally, then, are what Cowen argues we need to pursue. This economic self-control is not something that comes to us easily, and thus we should strive to set up institutions that encourage longer-term thinking.

Uncertainty plays a large role in Cowen’s analysis, as he acknowledges the need for epistemic humility when considering policies that we hope will have large impacts centuries later. Tiny differences can be catalysts for massive change. Might one more car in a traffic flow, for example, have changed the plans of a serial killer? Could a missed train prevent a nuclear holocaust? It can be nearly impossible to know what decisions will maximize sustained economic growth and promote responsible, ethical outcomes in the long run, Cowen muses. Nonetheless, there are policies we can enact today with meaningfully higher probabilities of long-term success.

In this world of uncertainty, Cowen puts forth an alternative framing of a classic utilitarian thought exercise about whether a mother should kill her baby if it will lead to a $5 billion boon to society. Rather than the scenario being a choice between the baby and societal monetary gain, the choice is between saving the baby and an enormous amount of uncertainty about how the money will affect the social fabric and our legal institutions — the $5 billion being a relatively arbitrary (and trivial, by global economic standards) amount. By this reasoning, Cowen determines that respecting human rights should trump any flashes of apparent short-term gratification.

Rarely does economic growth enter into the discourse of egalitarian principles or social justice. Cowen laments that discussions focus more on the idea of how to distribute a fixed amount of prosperity than on the morality and responsibility of that prosperity. With all the good that comes from economic growth, Cowen is astounded that so few thinkers have incorporated economic growth into their philosophies as a moral principle. Economic growth and decreasing inequality are not mutually exclusive, and can even be mutually reinforcing with appropriate redistribution. Investing in a low-income child’s education and health, for example, produces far more economic growth in the long-run than the initial investment cost, and also improves his or her life overall.

While certainly not against redistribution, Cowen consequently believes many self-described egalitarians are overly focused on short-term redistribution and not enough on “Crusonian” policies, whose impact dwarfs that of small welfare state transfers. As an example, he cites US worker productivity, which slowed in the early 1970s and has remained slow since. Had it continued at its previous rate until today, the median household income would be nearly $95k, instead of the current $59k. But how many egalitarians have focused their efforts on the productivity puzzle rather than redistribution? As meaningful as redistributive policies are, they pale in comparison to the increase in income from higher economy-wide productivity gains.

Cowen also prompts us to consider the enormous amount of good that migration does for human well-being in the context of welfare state policies. Research suggests that the ability to do identical work in the United States can increase someone’s wage 260% for a Peruvian, 350% for a Filipino, and 700% for a Haitian. This means that mere access to the United States labor market can be the most dramatic source of increased quality of life for people in lower-income countries.  However, amidst unfortunate recent political turns against migration, Cowen observes that “excess [welfare state] transfers…make it harder to absorb high numbers of immigrants from poorer countries.”

With all of Cowen’s praise for the benefits of increased productivity and steady economic growth, however, there still exist important limitations to the extent that increased economic production affects our well-being. This is the greatest shortcoming of Stubborn Attachments.

The concept of Relative Deprivation holds that people’s evaluation of their own well-being is more strongly tied to their relative status than their absolute standard of living. That is, when people evaluate their lives, they do not feel a sense of gratitude when they contrast their present material conditions against those of their ancestors in 1850. Instead, they look closer to home, comparing how much they earn to how much their neighbors earn, how much their salary has increased since the prior year, and whether they feel a sense of agency within their world. While the fruits of economic growth are not necessarily zero-sum, relative status is  — just try comforting a disenfranchised person in our society today by saying, “but no one even had air conditioning a hundred years ago!”

No matter what measurable statistics say, people’s perceptions can often differ from reality. Despite violent crimes halving in the last 25 years in America, 70% of Americans believe crime has actually increased over that period. Few recognize the colossal decrease in global poverty as well. This raises questions of the extent to which increases to objective measures of life quality actually matter if people do not recognize them. Put another way: If a Crusonia plant grows in the forest to an incredible size, but no one notices it, does it really bear any fruit?

It is an unconvincing leap to suggest we should reorganize society to only maximize people’s perceived wellbeing. But it is also important to acknowledge the limits that economic growth can have on our own life satisfaction. Nobel Laureate Daniel Kahneman helped develop the concept of Prospect Theory, which suggests that increases in income, rather than producing a sustained level of higher satisfaction, instead set a new benchmark for our expected standard of living. As our income increases, we are effectively speeding up a “hedonistic treadmill.”

Prospect Theory additionally incorporates an idea of “loss aversion” that suggests we suffer more from a dollar lost than we celebrate a dollar gained. In this way, economic growth’s understated value could be less in what we gain and more from what it allows us to avoid losing. Cowen notes correctly that our economic gains minimize misery by way of preventing death from forces like natural disaster, disease, and violence.

Cowen acknowledges the idea of a hedonistic treadmill but believes the constant pursuit of wealth is necessarily a rational preference for higher income: “Many individuals strive to earn higher incomes, even after they have experienced the strength of aspiration and treadmill effects.”

However, contending a rational basis for hyper-ambitious behavior ignores the fact that many people misperceive the extent to which getting richer will make them happier. In Adam Smith’s Theory of Moral Sentiments, the son of a poor man imagines himself in the place of a rich man riding down the street in a carriage, believing the accompanying luxuries will lead to unparalleled tranquility. After a lifetime of toil and wealth accumulation, he lies on his deathbed realizing that, far from giving him happiness, his luxuries merely led to meaningless utility. The parable illustrates that although many measures of life satisfaction are tied to higher income, we are still susceptible to overestimating the impact of more money on our happiness.

Stubborn Attachments is short and intentionally vague on many dimensions. Respecting human rights is an admirable pursuit, but what is the definition of human rights? At what point do income transfers become so excessive that they make immigration untenable? How exactly can we be sure to establish institutions that lead to higher sustainable economic growth? Cowen knows these are important questions but instead chooses to emphasize the need to rethink our big-picture goals. How we get there is still up for debate, but Stubborn Attachments presents a compelling case for redefining our long-term priorities in favor of more sustained economic growth and a greater respect for human rights. 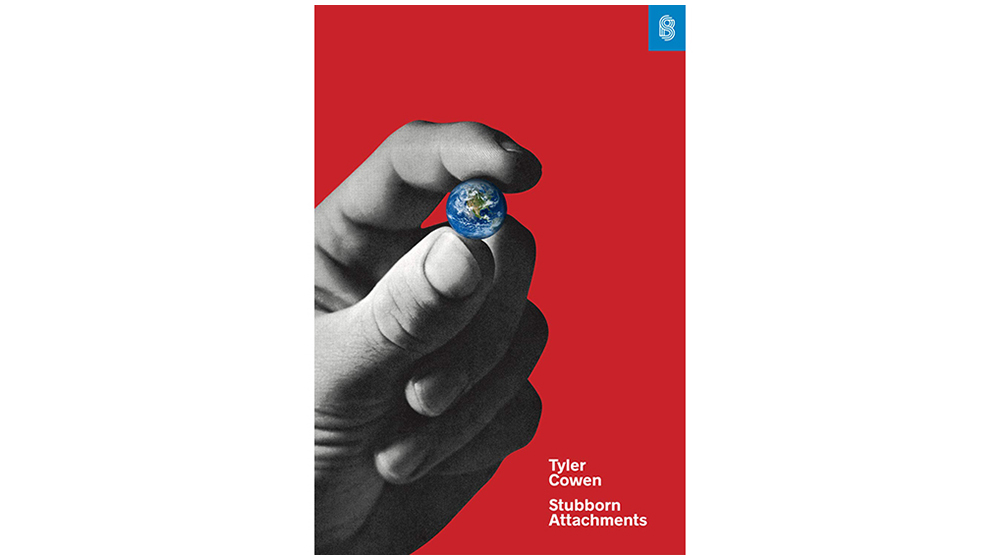