In order to count the number of orgasms in Panos Cosmatos’s Mandy — a film that features no on-screen sex — one must first define the word “orgasm.”­­ We will, therefore, define it as follows: a reaction to cathartic or other pleasure that may, but need not necessarily, involve the release of fluid from the body either experiencing or causing said pleasure. According to such a definition, the orgasms in Mandy include the moment in which rugged lumberjack Red Miller (Nicolas Cage) cuts a man’s throat and gets showered with blood; the moment in which Red drives the pointed handle of his homemade axe into and through the mouth of a different man; and the moment in which Red pops yet another man’s head like a pimple and emits a post-coital groan.

Mandy’s orgasms are overwhelmingly experienced by men, which speaks to their conflation with the imposition of violence. They’re also the necessary byproducts — or rewards — of Red’s quest: after his partner Mandy Bloom (the haunting Andrea Riseborough) is kidnapped and killed by the sex-drugs-and-rock-and-roll cult of Jeremiah Sand (Linus Roache), Red goes on a vengeful killing spree through California’s eerie Shadow Mountains. His resultant journey, set in 1983 and dripping with red and pink and purple and synths, is a love song to 1970s and ’80s horror, to the slasher and body horror films that were in gruesome conversation with the politics of the Sexual Revolution and the Vietnam and Cold Wars.

Horror films of the era tended to either vilify the forces that repress sexuality, or pervert the audience’s understanding of sexual and non-sexual beings. The murderers in The Texas Chain Saw Massacre (1974), Halloween (1978), and Friday the 13th (1980), for example, all slaughter sex-having teens. In The Exorcist (1973), meanwhile, the demon possessing a young girl says, “Stick your cock up her ass, you motherfucking worthless cock sucker” — to a priest. Both approaches equate the ostensibly reproductive act of sex with destruction. It is a thing that teenagers do before some masked, reactionary avenger butchers them; just as it is a thing that tempts men of the cloth to forsake their supposedly higher callings. Sex is thus a source of physical pleasure severed from the future, devoid of lasting relationships, childbirth, spiritual transcendence, and other long-term prizes. In the realm of horror, sex resembles the a-bomb, a characterization reminiscent of Norman Mailer’s notion of the “apocalyptic orgasm”: a self-consuming burst of violent sublimation. One climaxes, and one ceases to exist.

It is such a tradition that Mandy gladly inherits — but the film is, remarkably, even less concerned with subtlety than its predecessors were. There is definitely subtext in Mandy, including the likelihood that Red fought in Vietnam and the extent of the childhood trauma that Mandy seems to have experienced. But the film is notable for how straightforwardly it treats its sexual symbols. The clichéd identification of phallic imagery, so at home in discussions of horror films, is no longer clichéd: the first thing the audience sees Red do is fell an immense tree, his body vibrating as his chainsaw digs into bark. Later in the film, Red hunts down a group of psychically devastated, sadomasochistic bikers who wear disturbing leather costumes — rumor has it that they’ve gone eternally bonkers thanks to a bad batch of LSD. One of the beasts dons a blade-penis that stands erect as he approaches (then dies at the hands of) Red. The physiology’s hazy, but the meaning isn’t: sex and death are one, and the penis is equally capable of inflicting both.

The most active penis of the film is that of Jeremiah Sand, whose sex cult kidnaps Mandy after Jeremiah takes a liking to her. The cult — the Children of the New Dawn — appears to travel the countryside ingesting large amounts of LSD and finding women for Jeremiah to have sex with. (The Children keep the monstrous biker gang on retainer with drugs and human flesh.) Once kidnapped, Mandy is drugged and exposed to Jeremiah’s dual horrors: the disquieting folk song he recorded and his messianic delusions.

In his time of trouble, Jeremiah says, God encouraged him to commit to hedonism: “He said you are not separate from all that is, so all that is, is yours. And he gave me his deepest and warmest permission to go out into this world and take what is so very much mine. All of it, mine. My wants, my needs, my pleasures.” Jeremiah delivers the line as part of a monologue that lasts for several minutes, featuring an extended close-up of his face from Mandy’s perspective. But at various points in Jeremiah’s speech, his face becomes Mandy’s — his features gradually, almost imperceptibly, get swapped out for hers — before becoming his own again. The swapping simultaneously enacts Jeremiah’s message of oneness and highlights how much the effectiveness of the message relies on LSD’s mystification.

Expectedly enough, Jeremiah now wants to have sex with Mandy, and he rises, opening his robe. His song, which faded out during his close-up, once again spins on the record player: “Every seed that gives us life / Every man must take a wife.”

“You made this song?” Mandy asks.

“Yes, I did,” Jeremiah answers, running his hands up and down his body.

“And it’s about you?” she asks, the camera still on Jeremiah.

But he has misread his audience, having not payed attention to the Mötley Crüe and Black Sabbath t-shirts that Mandy regularly wears. The camera cuts to Mandy, who laughs; maybe at Jeremiah’s song, maybe at his self-righteousness, maybe at the acid-soaked world, or maybe at the fact that Jeremiah’s exposed penis is flaccid.

It is telling that after Mandy laughs at Jeremiah, his cult burns her alive. On the one hand, Jeremiah is profoundly insecure; and on the other, consummation and death are kindred fates in Mandy’s hellscape. Jeremiah has his way, by orgasm or by fire.

Red watches Mandy burn. He is tied up, and clenching, between his teeth, barbed wire akin to Christ’s crown of thorns. Prior to Mandy’s death, Red was a tender and affectionate man. He was a loving partner to Mandy, who seemed to occupy a world of her own. She constantly read fantasy novels and created trippy (and impressive) art, suggesting a desire to escape from the forested seclusion of her home, or from her relationship with Red, or possibly from both. The couple’s relationship didn’t even feel particularly romantic. Red’s energy was fairly paternal and quite desexualized.

After Red loses Mandy, however, he embraces a mode of violent sexuality. In preparation for his warpath, Red forges a metallic battle axe — he is, in contrast to Jeremiah, unconditionally hard. Indeed, in terms of imagery and symbolism and power, Red comes to resemble a living, breathing hard-on. The visual is perhaps strongest when Red walks toward a member of the cult, intent on murder, and repeatedly revs a chainsaw only for his prey to pull out a comically long chainsaw of his own. The ensuing duel ends in one of the many apocalyptic orgasms Red induces: his opponent lying, face-down, atop a running chainsaw that tears the flesh of his abdomen, confoundingly evoking both impregnation and abortion through the mutilation of a male body.

Mandy culminates in an ultimate, mutual orgasm. Red finds Jeremiah underground — beneath the church that his cult is building — and grabs his head. Jeremiah falls to his knees, pleading for his life. “I’ll blow you, man,” he says, right about sex’s presence in the standoff, but wrong about how his hunter wishes to express it. Jeremiah quickly turns defiant, reiterating his status as God’s chosen one, but Red silences him. “I’m your god now,” he says, before crushing Jeremiah’s skull, sending an eyeball shooting out of its socket.

Red breathes as though he has finished. He sets the church aflame, and it burns like Mandy burned. Red, become Death, drives off. 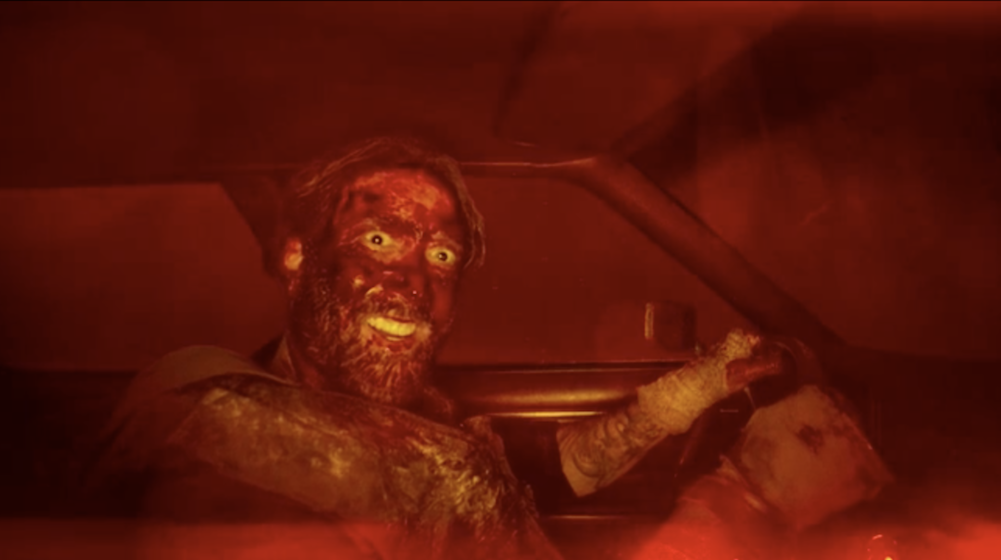