In order to restore American greatness, we need more people. According to Matt Yglesias’s latest book One Billion Americans, a lot more. The only way to compete with countries like China to maintain our role as the hub of global innovation is to get to a billion Americans. Through pro-natalist policies and increased immigration, the United States has the physical space and capability to accommodate this massive population increase.

One Billion Americans has a lot of excellent policy ideas: increasing the American population through Yglesias’s prescriptive policies would be beneficial and morally just. And the advantages of population growth themselves should be given more attention. But for those already in agreement with Yglesias, it’s difficult to find much fundamentally new in his arguments or framing. For those in opposition, the book is unlikely to convert.

Yglesias waffles between arguments he believes are pragmatic and those that are encouraging “thinking bigger.” Both of these have value, but he switches between them at random times, operating seemingly at whatever level is the path of least resistance. Are we meant to take his idea of a billion Americans seriously but not literally? His ideas can support a much higher population even if it’s not a billion, but he struggles to establish when it’s time to think pragmatically and when to just think bigger.

Underlying the book, Yglesias believes America should reach a population of one billion because retaining American hegemony is both desirable and uncontroversial in American domestic politics. He doesn’t bother too much with harping on this point, and the rest of the book should still speak to people who want to increase general welfare, even if American dominance is not a shared goal. Reclaiming American power is, as Yglesias correctly points out, a matter of math. The United States has about a quarter of the population of China. We are much richer on a per capita basis, but we derive our international political power from having the largest economy in aggregate terms. We simply can’t compete with China if we don’t rapidly increase our population.

Would adding so many people take away resources from existing Americans? On the contrary, Yglesias demonstrates how population growth causes what economists call “increasing returns to scale.” Having more people means a better diversified and specialized labor market, a bigger tax base for public investment, and more spillover effects from types of knowledge that lead to innovation. Increasing population means higher productivity, but it also means a virtuous cycle where cities invest better in infrastructure and businesses are created to satisfy more consumers. Decreasing population has a reverse feedback loop: businesses move out of town from fewer customers, a narrower tax base means worse public infrastructure, and house prices for existing residents decrease.

Far from being physically “full,” tripling the US population would leave continental America as dense as France and less than half as dense as Germany. We can fit hundreds of millions of more people, but we do need to make policy accommodations to ensure an ideal outcome.

The path to nearly 600 million more people comes through two channels: making it easier for Americans to have children, and letting a lot more people in. The first involves better government support for parents and policy reforms meant to make supporting a family more affordable. Yglesias points to surveys showing a significant gap between the number of children couples desire to have and the number they actually have. The top reasons given for this gap fall under the umbrella of affordability. With no mandated parental leave, low government support for kids, and the rising cost of childcare, having children in America is expensive. Expanding government support through child tax credits, public provision of daycare, and mandated parental leave would all help in increasing families. Inevitably, Americans would see supporting children as a community effort and not just one left up to parents.

These ideas would be positive independent of a quest for American greatness, but a couple crucial aspects remain unaddressed. European countries have similar policies and yet experience sluggish birth rates. They could make the relevant population declines less bad than they’d otherwise be, but don’t European countries show the insufficiency of these policies? If we’re going to get to a billion people, it would be good to know when these policies do and do not work.

The other channel to a billion Americans is through letting more people in. Increasing the birth rate has positive impacts on American population levels down the line, but immigrants show up ready to work, ready to consume, and ready to pay taxes.

In 1980, Fidel Castro allowed Cubans a window to head to the United States. Cubans left the port of Mariel and showed up in huge numbers on the coast of Miami. Miami was inundated with a wave of newcomers ready to participate in the local labor force, needing a place to live, and clogging up the roads. Despite this sounding like a chaotic event destined to drive down the wages of locals, the “Mariel Boatlift” showed that even a huge influx of migrants — mostly low-skilled and with little English proficiency — won’t cause a race to the bottom for wages in Miami. There were some frictions in the adjustment process, but the newcomers by and large were a positive impact on the area economically and socially.

Yglesias brings this up to show how immigration does not cause massive job loss or downward wage spirals, and presumably to show how it could apply to the nation writ large. Yet Yglesias admits that something like the Mariel Boatlift on a national scale would be unreasonable: “Nobody would or should propose that the United States routinely increase the size of its labor force by 7 percent over a six-month period.” Huh? How else are we supposed to get to a billion Americans? Even if the number of one billion was meant to be apocryphal, where does Yglesias draw the line of what is deemed reasonable in numbers or for a timeline? Even for those who see the Mariel Boatlift as evidence of the positive impacts of immigration, his framing asks more questions than it answers. In a country that elected Donald Trump, it’s reasonable to ask how politically palatable it would be to let in hundreds of millions of newcomers when recently there has actually been a net migration out of the United States into Mexico.

Outside of wages, there are immigration skeptics who feel too much immigration would overburden public services. Public schools and other institutions will be pressed quickly to accommodate a new population, and the increased tax revenue doesn’t always time perfectly with the higher demands. But Yglesias glosses over this and dismisses other concerns over increased immigration that occur outside of the labor market. Anyone who is skeptical of the political salience of more immigration is unlikely to have their doubts assuaged.

Of course, we’ll need to make some changes to accommodate nearly 600 million more people. Yglesias rehashes a playbook of technocratic fixes familiar to policy wonks: reform local zoning to build more housing and increase density, enact traffic congestion fees, and invest more in mass transit. America’s inability to build more housing — especially in superstar cities — has made it physically difficult to give everyone a place to live and made it harder to raise a family because of the corresponding house prices. Roads without tolls make driving cheaper than it should be and clog highways while leaving mass transit underfunded.

These are all excellent ideas, but there’s not much in One Billion Americans that’s particularly new. In fact, the policies’ desirability only further underscores the question of why they haven’t been done yet. Housing policy in America is hyperlocal and, while there has been some progress, entrenched interests are a brutal force protecting the status quo. Congestion fees have worked internationally but, even in New York, have faced tough political battles. Legislating zoning at the state instead of local level has been recognized as a great idea but has yet to break through on a large scale. On these process questions, Yglesias offers some potential workarounds, but the reader is left feeling pessimistic about political bottlenecks.

In international development, low-income countries often struggle with improving one aspect of their economy when other weaknesses are immediate impediments. Building a school is difficult if roads are ill-maintained. But roads can’t be built if public administration can’t organize infrastructure projects. But the public administration suffers from weak tax enforcement, and so on. A vicious cycle emerges that makes it difficult to solve one problem without solving them all at the same time. This is analogous to many policies put forth in One Billion Americans and creates another source of political bottleneck. If a population increase isn’t matched simultaneously by an increase in housing stock or investment in infrastructure, housing becomes even less affordable and public services get even more overwhelmed.

There are some ideas in this book that are bold, innovative, and relatively realistic ways to increase American greatness. One is the concept of relocating parts of the federal government into struggling cities. Federal agencies no longer need physical proximity to each other in DC like they used to. They also hire lots of skilled workers with solid wages that can be a boon for struggling communities. Just as an Amazon HQ2 would spur growth in its destination city, relocating different federal agencies to declining cities will have knock-on impacts that encourage companies to relocate and increase the local tax base. Although not mentioned in the book, the BBC for nearly a decade has been slowly relocating some workers from London to outside Manchester with positive results.

Another scheme is a visa program connecting workers to geography rather than a company. If a company wants to hire foreign workers, the government could approve a visa if it were conditional on the foreign worker living and working in cities like Toledo or Detroit. This would encourage the beneficial feedback loop of positive population growth and take some pressure off superstar metro areas like New York and the Bay Area. The relocation of federal agencies and these “Heartland Visas” are great ideas that can occur without other things simultaneously being enacted.

It’s hard to nail down the target audience of this book — whose mind is Yglesias looking to change, who is he trying to educate of the roadmap forward? On the one hand, everyone should hear more about the benefits of higher population, housing policy reforms, and immigration. And policies supporting families could find allies with conservatives who want to strengthen the nuclear family and liberals who want a stronger safety net. But most of his Vox readers have already heard most of these ideas and probably agree with them. The more progressive left will be skeptical about climate ramifications and dismissive of arguments that American hegemony is itself an ideal goal. Conservatives worried about rapid cultural change and a massive investment in public expenditure will wince at many of these proposals.

In fact, for so many of the technocratic fixes, the difficult roadblocks — hyperlocal land control, deficit hawks, negative perceptions of immigrants — are acknowledged but not convincingly dealt with. Perhaps Yglesias means “a lot more people” instead of literally a billion. Yet too many of these ideas seem like nice little hacks that will make small (albeit meaningful) impacts, but nothing on the order of magnitude Yglesias speaks of.

Yglesias doesn’t conduct any new research nor draw on any obscure long-forgotten ideas, and that’s okay. Many books can add value by reframing research in a different way, showing how a different perspective of existing ideas can change our way of thinking. But outside of the often counter-intuitive benefits of population growth, a reader will struggle to see anything new here. In the end One Billion Americans is full of great policy ideas but it provokes more questions than it answers, and is too often a repackaging of existing ideas with a zanier headline. 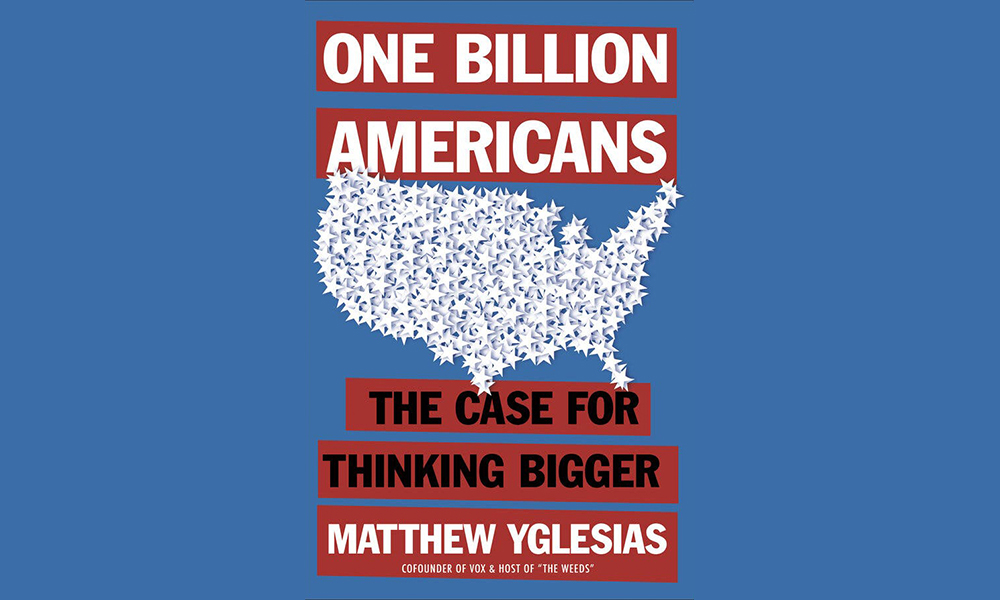