“Love and manipulation, they share houses very often. They are constant bedfellows.” Thus spake psychiatrist Dr. Josef Klemperer (Tilda Swinton, alias “Lutz Ebersdorf”) to warn his patient, the young dancer Patricia (Chloë Grace Moretz), in the opening scene of Luca Guadagnino’s Suspiria. This Nietzschean observation — that even the most moral of acts leads to immorality — beats at the heart of the 2018 remake of Dario Argento’s 1977 horror film.

The film’s title is a nod to the 1845 essay by Thomas De Quincey, Suspiria de Profundis, on which the original screenplay is partially based. Set in Berlin during the German Autumn — a series of rebellions in the fall of 1977 that included kidnappings and hijackings by extremist groups such as the Red Army Faction — Guadagnino’s Suspiria follows an American dance student, Susie Bannion (Dakota Johnson), as she enters the famed school of the fictional Helena Markos Dance Company. In the kitschy Technicolor original, the plot slowly takes Bannion, and the viewers, through a disturbing revelation that the school is run by a coven of witches. In the art-house-aspiring, gray-scale remake, this is quickly understood, and the film loosely organizes around the witches’ motives to find “the chosen one” — though the plot never fully coheres.

Guadagnino’s remake conjures its spells from a cauldron brew of erudite sources including Freudian psychoanalysis, Rainer Werner Fassbinder’s films, and modern dance history (which I’ll get to shortly). While Freud — and particularly his writings on “The Uncanny” — informs both character and plot, its cinematic application is out of balance. Freud defines “the uncanny” as “that class of the terrifying which leads back to something long known to us, once very familiar.” It’s the osmotic exchange between our ordinary lives and the realm of the supernatural that freaks us out. Yes, the film eerily twines reality and the subconscious through the reigning choreographer matron Madame Blanc’s (also Swinton) manipulation of Susie’s dreams. However, the Call Me By Your Name director’s excessive trappings of horror genre — pushed to extremes with gory conniptions and violent bodily contortions — overpower, if not annihilate altogether, any semblance of the familiar. The uncanny power of Suspiria comes not so much from its artistic devices, but rather from its subject: the shadowy origins of modern dance in Germany.

Chief, and most welcomed, among his departures from Argento’s Suspiria is Guadagnino’s choice of modern dance in place of ballet. This is also a departure from the niche subgenre of dance horror films, of which the original is part, along with Black Swan and The Red Shoes; these all play upon the uber-human strive for perfection, and male-over-female domination, associated with ballet. Guadagnino’s Suspiria instead plumbs the ecstatic, frenzied, and psychological depths of modern dance. Another improvement on the original is that the dance academy in 1977 Suspiria serves merely as a setting for the hell-bent sorcery, whereas the dance and expressive movement communicate much of the 2018 film’s meaning and propel the story.

Guadagnino searched for a choreographer who could create a physical medium through which his witches could channel their occult wills. After seeing choreographer Damien Jalet’s Les Meduses at the Louvre — a work inspired by the original Suspiria — Guadagnino found the possessed, herky-jerky movement vocabulary he had envisioned.

In preparation for the film, everyone from screenwriter David Kajganich to actor Dakota Johnson deep-dove into dance history, and the influence of modern dance is apparent in the film itself. Madame Blanc is an amalgam of modern dance matriarchs. The head witch most noticeably resembles Pina Bausch, who shared with Swinton similar austere features, powerful physical command despite a thin, willowy frame, low bun, and dangling cigarette. The character also draws from earlier generations and is peppered with references to American modern dance pioneer Martha Graham. But the most powerful reference, perhaps least known to today’s audience, is to Mary Wigman, Germany’s modern dance pioneer of a century ago. For full immersion, the Suspiria creators shadowed the German contemporary choreographer Sasha Waltz (whose company recently performed in San Francisco and New York); Waltz traces her artistic lineage back to Wigman via her teacher Waltraud Kornhass.

Wigman is least known because she’s been somewhat marginalized in dance history for two reasons. First, she challenges the grand narrative of modern dance as being uniquely American. If you’re not familiar with this grand narrative, it goes something like this: the seeds of the movement were sewn by a couple of American women performing in Europe, Loïe Fuller and Isadora Duncan. They broke away from ballet in favor of more natural, personalized, and arguably feminist movement. From there, Martha Graham and Doris Humphrey cultivated, championed, and codified modern dance in the States. But modern dance did not altogether leave its European roots. Wigman developed her own German expressionist strain of modern dance — Ausdruckstanz — that blossomed during the war, raged during Weimar, and certainly influenced her American contemporaries.

The second reason for some silence on Wigman is her career’s coinciding rise with that of Nazism. Her signature works, notably Witch Dance (Hexentanz), were demonic, individualistic, and challenged expressions of gender norms. Her later dances can be said to have conformed to the intense political pressures of Nazi Germany, as evidenced by her more graceful solos and group dances. In Susan Manning’s Ecstasy and the Demon: Feminism and Nationalism in the Dances of Mary Wigman, she details this apparent shift to accommodate fascist aesthetics, “which required an identification with the Volk and a clear distinction between ‘masculinity’ and ‘femininity.’” But Manning argues that it was not so black and white; while Wigman’s dances were coopted by the fascist regime, her works were just as much a way to comment on and critique fascist aesthetics as they were an endorsement of them. Manning sees the uncanny in Wigman’s work and its political resonances: “What is startling about Wigman’s career is the fine line separating her Weimar dances from her dances under the Third Reich.”

This is exactly the fine line that Suspiria evokes. In it, the legendary masterpiece choreographed by Madame Blanc in which Susie earns the lead role is aptly called Volk. In Jalet’s solo for “The Protagonist” in this piece, Susie sharply wraps her limbs around her body and exhales, releasing an inner coil and snapping her arms in front of her like a zombie. She backs up on hands and knees with winged shoulder blades like a retreating feline. The ensuing dialogue:

What did it feel like inside your body?
What it must feel like to fuck.
A man?
No I was thinking of an animal.

The camera cuts back and forth between Susie’s dancing to a resulting mirrored choreography of her classmate’s mutilation in a secret chamber in the bowels of the school. The movement, dialogue, and parallel scene all express the bleeding back and forth between the moral and immoral, the everyday and underworld. Is it oppressive or empowering to be part of the Volk? Is Susie willing her own steps within her onstage community or is each convulsion controlled by a dark, mastermind force? At which point in the film does Susie become aware of her malevolent movement, her body ceasing to be a mere instrument?

While the film’s fine lines can be polarizing — does the trope of murderous witches undermine the feminist history of modern dance? — they also form a cautionary message. When Madame Blanc says “there are two things dance must never be again: beautiful and cheerful,” it is a direct response to Joseph Goebbel’s historical proscription of Wigman’s “philosophical dances” declaring that: “Dance must be cheerful and must show beautiful women’s bodies.” Wigman subdued the androgynous, grotesque, and deeply powerful depiction of a woman central to Witch Dance and its variations to offer a more graceful dancing female to the male gaze. Suspiria stands a warning against this kind of conformity, however fine its line, in times that may again try to demand it. The paradoxical point is that pressure on the arts to clean up its morals is one tell of a deeply immoral regime. 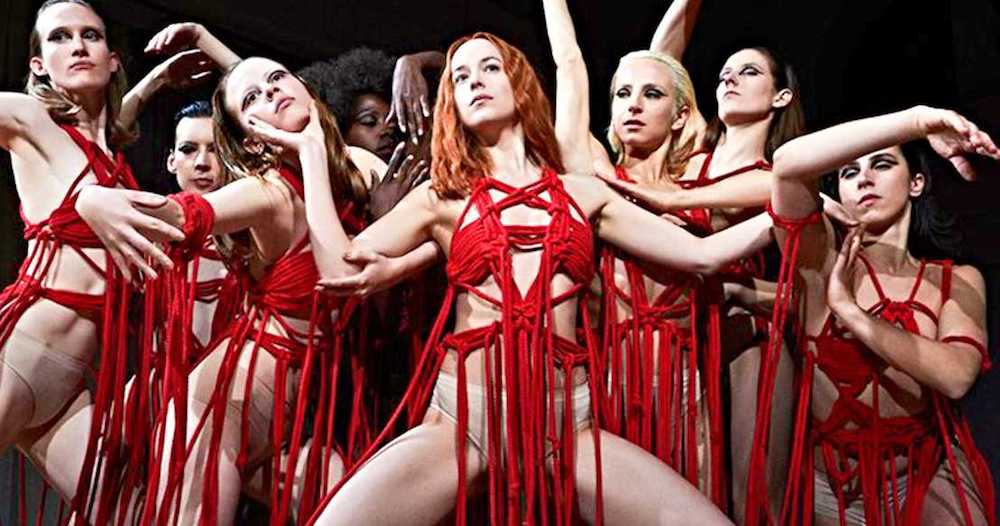