The cover of K-punk: The Collected and Unpublished Writings of Mark Fisher is both a vision of the past, and a reminiscence of what could have been. Had he lived, Mark Fisher’s next book was titled Acid Communism (the previously unpublished introduction starts 753 pages into the collection) so it’s fitting that the cover of this compilation is Fisher’s boyish face outlined in the stars. “Fisher in the sky with diamonds…” I sung to myself when I picked it up for the first time.

Mark Fisher was born in 1968 and died by suicide on January 13th, 2017. From 2003 to 2015 Fisher built an online community around his blog, k-punk; the majority of The Collected Writings of Mark Fisher is drawn from that space. He wrote about music — pirate radio, jungle, The Pixies, Joy Division — and capitalist realism. K-punk used Jacques Derrida’s hauntology (time, dislocated) as a metaphor for post-modern pop culture. However, Fisher’s real talent for musical ekphrasis was in describing a political mood rather than a sound. As an American born in 1991, it felt good to slot my own references into his theoretical frameworks.

K-punk joins previous essay collections in tackling the challenge of recreating the digital universe of a blog in text form. The idiosyncrasies of Fisher’s blog are difficult to replicate in print. “The editorial task of putting together this collection was, at times akin to a peculiar form of digital archaeology and memento mori,” writes the collection’s editor, Darren Ambrose, “Sometimes the task was one of recovering lost memories from pages haunted by dead links, a task that felt oddly appropriate given Mark’s emphasis on hauntology.”

Fisher praised blog-to-blog conversation, and the contextual weight of the hyperlink; however, he soured on the culture of anonymous commenting. “Think, really, how outrageous it is for the likes of ‘Roger’ to appear in the comments box and assure me that I am ‘coming off like a prick.’ On my own site,” he writes in a bit of k-punk housekeeping included in the collection.

The table of contents even looks a bit like a website map with its Russian nesting doll of topics and landing pages. But ultimately, the reader is left alone with Fisher’s legacy without the comfort of background digital chatter. Reading Fisher as a freelance writer in a gig-oriented industry feels incredibly intimate. I may not be the prototypical Mark Fisher fan, but I am grappling with the decline of my creative industry.

“Work has changed into simply a means of paying off debt,” Fisher writes. In order to pay off my student loans, I take on permalance (permanent freelance) clients to supplement my writing income. In exchange for this fixed income, I must conform to their internal tracking systems (invoices, monthly production schedules) and sometimes their work hours despite not being eligible for health benefits or paid time off.

“Work, no matter how casual, now routinely entails the performance of meta-work: the completion of log books, the detailing of aims and objectives, and engagement in so-called ‘continuing professional development,’” Fisher writes. Most of this coordination occurs via what Fisher calls ‘communicative capitalism’ after political philosopher Jodi Dean. “When the assembly line becomes a ‘flux of information,’ people work by communicating,” Fisher says.

It’s ironic that this critique of communicative capitalism should be offered on the very same platforms Fisher derided. Yet the theorist witnessed the early culture of blogs morph into an digital dialectic so diffuse it makes his old comment section look quaint.

While I was reading The Collected Writings of Mark Fisher I turned off my Twitter mentions after a run-in with the National Review. I can only imagine what Fisher’s mentions looked like, especially after his controversial essay “Exiting the Vampire Castle” in which he chastises higher education for converting the suffering of “marginal” groups into “academic capital,” creating a “market in suffering” where victimhood is co-opted by neoliberalism (extracted, exploited) and critiques of individual offenders are more potent than structural ills. All of which is to say, a certain politics of identity can distract from class solidarity. This essay is listed as a foundational text in a subreddit “focused on critiquing identity politics from the left,” as well as in the subreddit for the leftist podcast Chapo Trap House.

Before I went looking for Mark Fisher readers across the Internet I imagined a fandom of Fishheads on par with Phish or The Grateful Dead — the hauntology equivalent of a jam band concert crowd. Instead, I found this devotion in pockets, characterized by the projection of whatever values one deeply holds. You can find references to Mark Fisher in the Jordan Peterson subreddit and in the subreddits for “hauntology” and “capitalist realism.” There is no page devoted solely to the theorist.

Fisher writes, “A left that does not have class at its core can only be a liberal pressure group.” However, I can’t imagine him trading in the irony of groups that flout the “bourgeois-identitarian left” by using purposely offensive language. (I also ran afoul of one of these groups while working on this essay, leading me to delete a week’s worth of tweets. The sequence of repetitive keystrokes sounded like moth wings beating against a screen.)

Since there are no Fishheads coming for me, I will venture to say what Mark Fisher really wanted: not a world of free speech without consequences. Buried on page 759 is the phrase “exorbitantly sufficient.” Fisher is describing a second-hand childhood memory (of Danny Baker) listening to Tina Turner and The Hollies and looking down at the wake of his family’s boat on a clear, sunny day.

The cover of K-punk: The Collected Writings of Mark Fisher is exorbitantly sufficient. For the time it takes stellar light to travel to earth, we can only see stars as they were and not as they are. Real Fishheads know k-punk’s words may never reach earth. 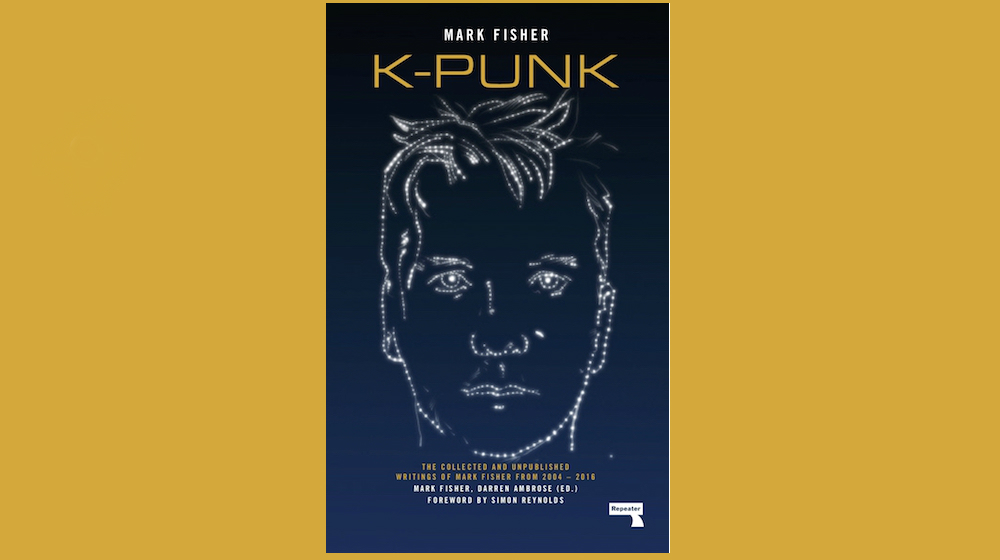