When I googled the title of Assassination Nation for a synopsis, it was impossible to pin down what the movie was about, and now that I’ve seen it, I feel no less equipped to give a tidy description. This is not because Assassination Nation is some kind of Lynchian masterpiece of confusion: it’s clear the film is, without much subtext, a one hour 50-minute miasma of gore, teen ass, and fake-woke political thought.

The film opens with a bevy of trigger warnings along with quick shots of climactic scenes, a trailer for the “horrors” to come (in fact, the scene is literally used as the film’s trailer.) There’s attempted gang rape in a school hallway, an on-screen suicide, lynching, waterboarding, countless stabbings, shootings, maiming, Maude Apatow smacking Bella Thorne in the head with a baseball bat, a bathtub full of blood, and police brutality against suburban teenage girls (rare!). What could incite such violence? An Anonymous-style hacker leaks the text message, photo library, email, and browsing history of half a small town, which might sound familiar from a superlative story arc of South Park, Season 20.

After the first act’s slog through plotlines that are never further explored, Joel McHale’s character, a married adult man saved in Lily’s (Odessa Young) phone as Daddy (with a heart eyes emoji) to whom she sends nudes and sexts, is hacked. These nude photos are leaked and the subject quickly identified as Lily. This, for some unexplained reason, instantly escalates to Lily’s boyfriend (Bill Skarsgård) and his friends strangling and undressing her in a high school hallway, and Lily’s parents kicking her out of the house. An ultraviolent masked mob of men waterboards a tech savvy kid who outs Lily as the leaker, and eventually the mob surrounds the house that Lily, Em (Abra,) Sarah (Suki Waterhouse,) and Bex (Hari Nef) are having a sleepover in. Lily finds a weapons cache in “Daddy’s” house after he attempts to rape her, and kills him. The film’s supposed climax, the girls’ rampage scene is a few minutes of machine-gunning followed by a nonsensical monologue about the power of teen girls.

A film starring a handful of talented young actresses is a welcome thing, if only the script in any way deserved their performances. Dozens of plotlines begin but are entirely abandoned or messily stitched back hours after they’ve been forgotten. Characters are seen once or twice and are lost into the ether. Voiceover monologues inadequately attempt to patch up the film’s flawed logic. Just after she’s stalked by a strange man with a knife, the film’s protagonist asks, why someone’s first instinct would be to try to kill a girl when her naked photos are leaked? Ah, so the screenwriter doesn’t know either.

At moments, the film tries to emulate remix-artist Tarantino, and reference other, better films. Unfortunately, the visual references are usually preempted by strange speeches explicitly discussing them. A slumber-party conversation about a desire to remake classic rape revenge movies, while watching Delinquent Girl Boss, a Japanese rape revenge movie featuring matching red trench coats, which is just moments later followed by… a murderous rampage in matching red trench coats (which, by the way, are available now at Dolls Kill for $68). Or, when Nef’s character sighs “Carrie, we miss you” sitting in a high school gym, just before Lily, the blonde Spacek-looking protagonist writhes on the bathroom floor covered in blood, pausing to look terrified in the mirror. Oh, also it takes place in Salem… like the witch trials. Get it?

The film’s best moments are when it allows itself to be a teen movie sans ultraviolence or cloying social commentary. When a football player Bex (Hari Nef) slept with says she looks good, Bex turns and says “yeah, obviously,” with a hair flip, bitchy smile, and bondage inspired choker. When Lily’s tween brother interrupts tension at the dinner table, asking if his parents saw a viral video of a family mauled on safari, having completely ignored his big sister’s woke-teen speech about the objectification of women’s bodies, I laughed out loud. Little brothers do, indeed, be like that sometimes. Or when the girls all roll their eyes and laugh as an insta-famous cheerleader (portrayed by the criminally underutilized Bella Thorne) explains adult men buy her gifts from her Amazon wish list because they “like her personality,” rather than her thirst traps, I felt like I was peeking into genuine 2018 high school conversation.

Assassination Nation has a strong political voice that doesn’t seem sure of what it’s trying to say. A movie that opens with trigger warnings for things like “the male gaze” and “rape culture” et al. with tons and tons of gratuitous shots of hot 18-year-old ass is written and directed by an adult man (Sam Levinson). This is a tale of teen empowerment and revenge, yet the only woman we see murdered is Nance, an adult black woman. An angry mob shattering the front door of the black principal, never confronting his blackness, an attempted lynching of a transwoman by football bros who respect her enough to use her proper pronouns, but not enough to stop them from trying to hang her from a tree.  Tons of syrupy speeches set in front of American flags about how teen girls just won’t take it anymore! The list goes on. This does, in some ways, mirror the oft-muddled politics of teendom; both the new woke-teen generation, and generations of teenagers that came before them. Impassioned, well-intentioned, yet slightly myopic beliefs that will doubtlessly evolve from sanctimony to nuance. I can remember screaming at high school history teachers, gym teachers, my parents, anyone that would listen really, about feminism. What is then strange, is the 33-year-old writer-director’s role in assembling the film’s message. Does he have the optimism of a teen? Is this a parody? I’m not sure, but I don’t think so.

Assassination exists on some kind of plane with such teen murder films as Heathers, and Jawbreaker, but these now-vintage classics no longer encapsulate the frustration and panic of today’s young women. Blood, gore, and murder are no longer fantastical, they have entered high school outright in the form of the school shooting. Assassination may be placed in a canon with the recent release, written and directed by a man about the teenage female psyche, Bo Burnham’s Eighth Grade. Unlike Assassination, the film doesn’t come with a bevy of trigger warnings or make claims to smashing the patriarchy, but likewise explores the other end of what it means to be a teen girl online and IRL. The routineness of school-shooting drills, body anxiety, the loneliness, the fear of men, while maintaining a PG rating. Both films may deliver catharsis in the form of entropy, Eighth Grade in doing your own thing and saying “fuck this” to mean girls, and Assassination through removing the guns from typical assailants and giving to them to the attacked.

When the lights went up, after the oddly tacked-on credits scene in which an all-black marching band we’ve never seen before inexplicably performs a rendition of “We Can’t Stop” by Miley Cyrus, I asked a lone teenage girl in the theater what she thought of the film.

“I liked it?” she said with an upward inflection and a shrug, questioning her answer. 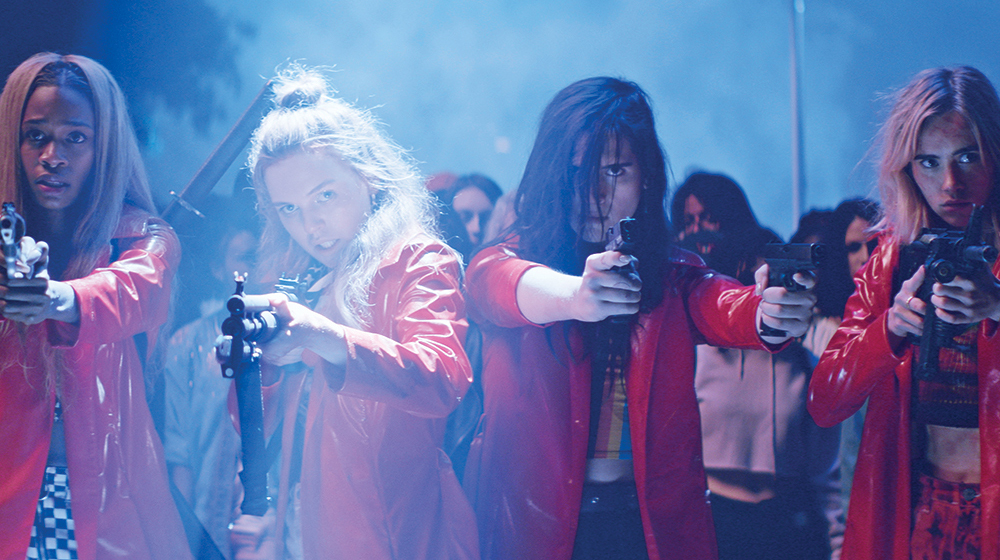