Growing up in the south, conversations about sex were…well, they were non-existent, non-happening, non-occurring. It was not recreational and it certainly wasn’t allowed to have adjectives. It was only a noun. We learned at a young age not to talk about sex with anyone. Not friends, not family, not teachers, not even doctors. Sex happened in order to create life. So say you grow up in an environment with little sex talk, but you’re a curious young woman who must, ahem, self-teach. Where do you go? What do you read, watch, prescribe to, in order to find the answers?

For me, it was whatever I could find on our basic cable package. It was DVR-ing and re-watching scenes of heated romantic ’90s sitcoms, NC-17 movies, and even the occasional library loan. Often I was too embarrassed to do the latter. So I sought the time old staples, indulged, learned, and got downright scared. How could this weird fumbling of bodies be so effortlessly choreographed? Why wasn’t anyone sweating? Was sex always supposed to be this perfect sport of two bodies?

So as you can imagine, when I received my copy of Condoms and Hot Tubs Don’t Mix: An Anthology of Awkward Sexcapades, I was intrigued. A book who’s back-cover boasts of honest accounts of sexual experiences. Not the perfect kind. The funny kind. The messy kind. The real kind.

What’s actually inside this short, 242-page anthology? Co-editors Jennie Jarvis and Leslie Salas have delivered an unorthodox collection of non-fictional stories, poetry, and comics that center around awkward sexual incidents. In addition to these entertaining and sometimes surprisingly sentimental recounts, there’s a series of 20 sexcapade sex facts spread throughout the book.

We start with sex on the kitchen floor.

In the first piece, “We Broke the Dictionary,” a young couple gets intimate while researching coriander. Amidst their attempt at a sexy kitchen romp, cilantro is pushed off tables, cookbooks create creases in skin, spice jars fall and puff up clouds of cinnamon, and a dictionary is broken in the process. It doesn’t go as planned, but it ends in satisfaction.

Not all sex stories end satisfactory though. Later in “The Lay at Gay Days,” a man tries to go about getting laid during this weekend long Disney World party where gay men dress in all red and skimpy outfits. A small medical need (possible pink eye!) distracts him from an epic pool party, and he ends up where most of us do when we are feeling lonely, online flirting with strangers. Thankfully, this leads somewhere — to a hotel room. With a stranger. Where our lead character proceeds to accidentally shoot his own semen into his eye.

Before we get to this story, we see in the comic “Love in the Dark,” two attractive women trying to get it on together. One prefers the lights off. This comic visually recounts the too-tired-to-have-sex phenomena. The argument for pitch-black darkness heightening certain senses turns to one partner accidentally falling asleep during foreplay.

The comics in this anthology are as funny as they are real. They portray some of the awkwardest parts of being naked with another human being. There are only 4 comics in the book. I honestly would have been happy with even more. The original pieces drawn by cartoonist, BABS! the great, act as a nice respite from the more verbal parts of the book.

But not all the stories and poems and comics are light-hearted in nature. Some of them get downright vulnerable. Vulnerability is a fond and familiar tone for many a couple’s first time together. This wasn’t one of the many insightful sexcapade facts and I don’t know if it has been proven, but I’d argue from my own research and the research of many a girlfriend, that your first time with any new partner never goes exactly as planned. There’s always something that will inevitably be awkward in some way.

Hopefully, like in “Pretty in Plastic,” your pre-coital anxieties will lead to a happier ending. What does one do when one wants to get down and dirty but also has to end that night of passion by placing a sleep apnea mask over their face? Will they risk losing their sleep/life by not wearing it? As our lead character worries, “What if he woke up and screamed, my alien face shocking him in the dark?”

A few pieces described relatable sexcapades in a lackluster tone. They bragged great content but had very bad deliveries. Something that we’ve all, unfortunately, have probably experienced in the bedroom. You’ve got all the equipment right there, so why is it so disappointing?

Others described their sexcapades using overly abstract and high falutin words. These stories remind me of partners who are vague about their experience levels, what their likes and dislikes are, what they hope to gain from this particular affair. These usually ended in awkward goodbyes, upsetting critiques, or overall abstract sexual experiences.

There were others that actually made me cringe the whole way through and led to no real takeaway. They were creepy and over the top.  I’m not sure I have to draw a comparison here. You get it.

While most of the time I was reading this book, I felt completely captured, in the bedroom/kitchen/airplane bathroom with all the sexcapades happening, there were some that took me off the page and made my mind wander off to my grocery list, how much more time my delicates needed in the drier, and other monotonous activities.

Stories about sex should aim to do the kind of things “Anything But Boredom” does for the reader: to provide mystery, to ask honest questions, and to help connect the reader with their own sexuality.

Sex can be messy, informative, funny, tiresome, awkward, cold, uncomfortable, innocent, naughty, painful, playful, pleasurable, and adventurous. Sex can be many things. And sadly it can even be downright boring. Stories about sex, however, should aim to please.

The vast majority of the stories, poems, comics, and sexcapade sex facts found in this wonderful little anthology provided a happy ending. While not every piece was a page turner, I was overwhelming pleased. Condoms and Hot Tubs Don’t Mix provides laughter, relief, tears, information, and a whole lot of self-exploration. If only this book was around when I was a young southern girl in need of my own sex-ploration, perhaps I would have had more realistic expectations.

As an added bonus, all proceeds of this anthology go toward helping fund Planned Parenthood. After all, this is an organization that knows more about real sex than any sexual partner you’ll ever awkwardly stumble upon at your neighborhood bar. 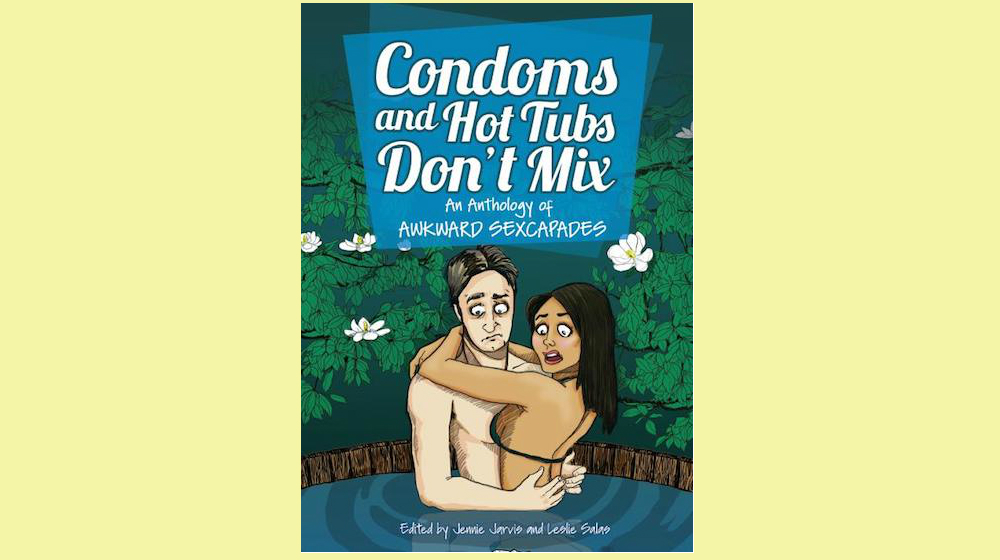