The fierceness of the storm echoes the fierceness of the women in this collection of poems. Some are clearly the poet; others are personae. Alexis Rhone Fancher takes on, for example, the viewpoint of a waitress who runs away from home; a lonely single woman who advises other women to “get a dog”; a wife whose husband “never lays a hand on her” until he murders her; a Tuesday night “bit of sex on the side” whose married lover calls her babycakes and holds her like she matters; and a woman who finds the courage to jump off the roof tonight. Alexis Rhone Fancher is, above all, a fascinating storyteller whose focus is female sexuality: her poetry is erotic, sad, hilarious, ironic, or a mixture of all of these things.

Spoiler alert — Rhone Fancher is partial to using what some might call crude language to cut to the sexual chase. For example, she doesn’t describe her partner’s penis as his “thrusting manhood,” and she calls a blow job a blow job. It feels to me like she’s being honest with the reader, and that’s welcome after the purple prose of popular women’s literature.

Quite a few of the poems in Enter Here aren’t erotica, but poems of witness, including Rhone Fancher’s “bad girl” poems. They’re ultimately not about sex, but about power, the power a person gives away by sleeping with somebody who’s using her as a “hole,” for example, as the woman in “Tonight I Dream of My First True Love (Mėnage Ā Trois)” is being used, and, on the other hand, the power that a woman “owns” by being up front about her desires.

Rhone Fancher is a connoisseur of “bad girls” and sees through their hard shell to their underlying angst and anger. She channels the “bad girl” voice just right. The voice is someone who’s sophisticated, ironic, and world-weary. The voice can be razor-sharp, as in the poem “Tonight I Dream of My Last Meal with My First Ex-Husband, Who Was Both Fickle and Bent”: “He used to tie me to the bed posts — the only way he could get off. I didn’t mind. He hated that.” In the poem “Three Little Words,” this “bad girl” voice remarks unromantically and unerotically, “M’s white teeth nibble at my clit like a ferret.”

Another important group of “bad girl” poems is about sisters, and the “sister” poems are both hilarious and sad. According to “When your mother convinces you to take in your homeless younger sister,” a younger sister will steal her older sister’s boyfriend and “do it” with him better. About her sister, the speaker says, “This Mata Hari likes to watch.” The younger sister envies everything her older sister has. Rhone Fancher’s portrait of toxic sibling rivalry is darkly humorous, except when it’s not funny. For example, the younger sister will make half-hearted suicide attempts that the older sister must rescue her from — again. The poem’s last line is: “Forgive your sister as she forgives you.”

In the standout “June Fairchild isn’t dead,” June Fairchild is lightheartedly treated as a “bad girl” who’s down, but can’t be kept there for long. A more somber “bad girl” poem that exudes existential sadness is the cento “Play It As It Lays,” which uses Joan Didion’s 1970 novel Play It As It Lays as source text. Despite the noir descriptions of bad girls, and the ever-present humor, it would take a pretty dense reader not to sense the speaker’s underlying tenderness for these lost girls. 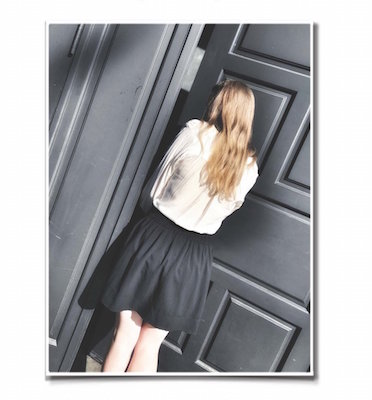