Georgia gubernatorial candidate Stacey Abrams’s romance novel-writing past came as a surprise to many people. But not to romance readers. After all, the ability to envision and work toward happy endings in defiance of unlikely odds is what characterizes the best romance novels and the best politicians. Like any good work of romance in the broadest sense of the word, my favorite romance novels of 2018 are, in one way or another, engaged in what I would argue are revolutionary acts of imagination. Many of these books are written by the authors from backgrounds that are still woefully underrepresented in publishing, and tell the stories of characters who have often been excluded from romance novels, and literature more broadly. These novels celebrate love, hope, and optimism while not shying away from the simultaneously difficult and mundane work of being human, and they helped me refuel in 2018. If you live in Los Angeles, I would highly recommend setting aside a couple hours to visit to the Ripped Bodice in Culver City, which happens to be America’s only all-romance bookstore (and the feminist utopia of my dreams) to learn more about these­­ — and many other — splendid books. 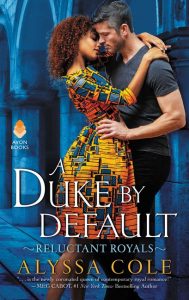 Alyssa Cole, A Duke by Default

The second book in Cole’s “Reluctant Royals” series, A Duke by Default centers on Portia Hobbs, the aimless daughter of wealthy New York real-estate developers who, through a series of totally plausible circumstances, ends up apprenticed to a hunky Edinburgh sword-maker, Tavish McKenzie. Although Tavish certainly checks the rugged-Scottish-man-who-says-“Aye” box, he is more than a Jamie Frasier clone. The unacknowledged son of a duke and a Chilean refugee, Tavish was raised in a working class Edinburgh neighborhood by his mother and Jamaican step-father. Although he is the novel’s more obvious reluctant royal, Portia also has to grapple with her reluctance to join her family’s business empire. For me, the most compelling part of the novel centers on Portia coming to terms with her own feelings of inadequacy and tendency to self-sabotage through a healthy combination of therapy, friendship, and romance. In the end, Portia finds a career and a life path that plays to her strengths and desires, rather than her parents’ expectations. 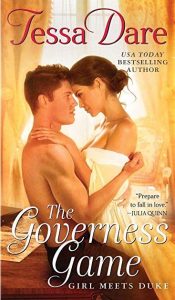 Dare has a rare gift for writing Regency romances that feel like a gentle hug from a screwball comedy that genuinely respects women. Her most recent novel, The Governess Game, deftly manages to be heart-warming and laugh out loud funny. It begins when Alexandra (Alex) Mountbatten, a clock-winder and amateur astronomer, finds herself accidentally hired as the governess to Rosamund and Daisy, the wards of the somewhat improbably named Chase Reynaud, the Duke of Belvoir. Like many a Regency duke, Chase has made a silent, tortured pledge not to carry on the family line. Unlike most dukes of his ilk, however, he is also a caring guardian who hilariously participates in the frequent funerals for his wards’ doll, Millicent, whom the delightfully macabre Daisy kills off on a daily basis. Despite having a rakish past and newly designed bachelor suite that Alex accidentally, but aptly, christens the “Cave of Carnality,” Chase respects and values Alex. Their romance unfolds in ways both sweet and hilarious. 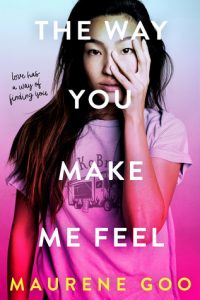 Maurene Goo, The Way You Make Me Feel

Technically a YA novel, The Way You Make Me Feel is one of the smartest, most thoughtful books I read this year. After a prank goes too far, high schooler Clara Shin ends up spending her summer working on her dad’s food truck with her nemesis, the too-perfect Rose Carver. Clara is an endearing mix of sarcasm and vulnerability, with an appealing core of confidence. As the summer progresses, she learns to embrace and express a wider range of emotions and to take a chance on a relationship with the deeply earnest — and charmingly named — Hamlet Wong. The novel is also a low-key love letter to Los Angeles, and to the city’s wonderfully diverse food cultures. 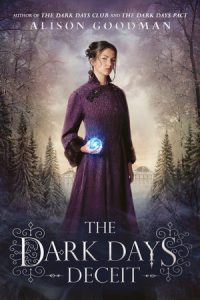 An important note: This is the final book in a trilogy, and you do need to read the series in order. Widely touted as Pride and Prejudice meets Buffy the Vampire Slayer, Goodman’s Lady Helen series lives up to the hype, and sets a high bar for the relatively small sub-genre of paranormal historicals. Goodman writes beautifully and is an incredible researcher, conjuring a vivid, persuasive, and fully realized Regency England with a demonic twist. This is YA, so the romance between Lady Helen and her brooding partner in demon slaying, Lord Carlton, is muted and chaste — but the palpably tortured longing that permeates the novels more than compensates. 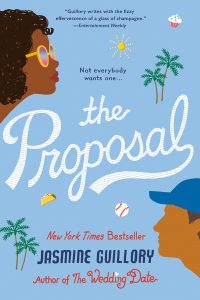 If you were one of the many people horrified by the dude who stopped his girlfriend mid-New York City Marathon to propose, then you will probably enjoy The Proposal. It all begins when writer Nikole Paterson’s not-that-serious boyfriend of five months proposes to her on the scoreboard at a Dodgers game — and she promptly refuses him. In the convoluted aftermath, Nik ends up escaping with Carlos Ibarra, a handsome, commitment-phobic doctor who — as we will later learn — is also an excellent cook. Although neither Nik nor Carlos intend to keep in touch, fate, of course, has other plans. The Proposal is Guillory’s second fabulous novel of 2018. Her debut novel, The Wedding Date, was also a delight. 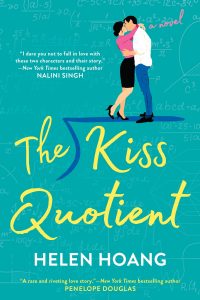 Hoang’s widely lauded debut begins with Stella Lane, a successful econometrician, hiring a male escort, Michael Phan. Then feelings happen. If the premise sounds contrived, the execution is anything but. Stella is on the autism spectrum and finds it difficult to navigate relationships in a world that privileges the neurotypical. Michael, meanwhile, is unfailingly patient with Stella, respecting and understanding her boundaries. Hoang’s author’s note addresses her own experience with autism, and she has written an insightful — and hot — book about acceptance and intimacy. 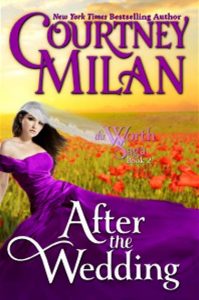 Courtney Milan, After the Wedding

I marvel at Milan’s ability to consistently write moving, thoughtful Victorians (and excellent contemporaries) with complex characters and brilliantly researched world-building. After the Wedding begins, appropriately given the title, after the shotgun wedding of Camilla Worth and Adrian Hunter, which is not a shotgun wedding for the reasons you might expect. The novel focuses on Camilla and Adrian working towards an annulment that we have an inkling they will probably not want in the end. Camilla has suffered a series of abandonments, and has to grapple with her own desperate need to be loved. Adrian, meanwhile, is the successful head of his family’s china-making business. But he is also desperate for the approval of the white family that cut off his mother when she married a black abolitionist. While the subjects Milan writes about are not usually light-hearted, she infuses her novels with a sense of promise and hope, reminding readers about the kind of people in Victorian England who worked to make the world a slightly more just place — and inspiring us to keep up the fight. 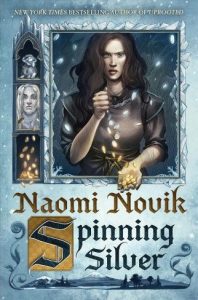 A loose and imaginative retelling of Rumpelstiltskin set in an alternate, magical version of pre-modern Eastern Europe, Spinning Silver is the kind of book that makes reviewers use the words “lush” and “sumptuous.” The story of Miryem, the daughter of an impoverished Jewish money lender, the novel is an improbable but highly compelling hybrid of Jewish storytelling, YA, and high fantasy. As in Novik’s first stand-alone fantasy novel, Uprooted, the love story is muted in comparison to the story of the female protagonist’s growth. (I would argue that the most convincing love story Novik has written occurs between British Napoleonic war officer Will Laurence and his war dragon, Temeraire, in her Napoleonic-War-with-dragons Temeraire series.) But I love how Novik has turned to reimaging fairy/folk tales that center women’s agency and friendships. 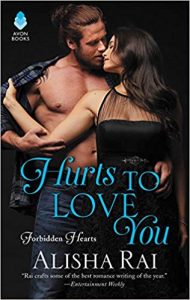 Alisha Rai, Hurts to Love You

Thanks to her “Forbidden Hearts” trilogy, Rai has quickly become one of my favorite authors. Set in upstate New York in the wake of a family feud, the series focuses on protagonists working through insecurity, pain, and setbacks in ways that feel plausible and relatable. Rai’s characters are often explicitly in therapy, and she integrates therapeutic thinking and techniques into her novels in ways that only add another level of complexity to her characters, and never feel didactic. The final book in the trilogy, Hurts to Love You, centers on the long-simmering attraction between the privileged but self-doubting Eve Chandler and her girlhood crush, Gabe Hunter, the son of her family’s housekeeper. Although Gabe is, like many a romance hero, exceptionally muscular and thoroughly tattooed (he’s a tattoo artist, to boot), he is also a nuanced, fully-realized human being. A lot of the power of the novel comes from Eve and Gabe learning to understand, appreciate, and care for each other in ways that move beyond the bedroom (although, like all Rai’s writing, Hurts to Love You is also very sex positive). 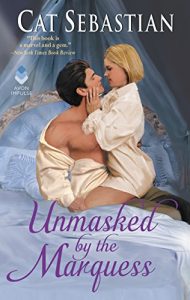 Cat Sebastian, Unmasked by the Marquess

After writing some truly delightful and refreshing m/m regency romances — including one that is, avowedly, a gay regency Sound of Music — Sebastian has debuted a series of m/f regencies. The first, 2018’s Unmasked by the Marquess, begins with the familiar trope of a woman disguising herself as a man for Reasons. And then Sebastian completely undoes the trope. The heroine, Robin (Charity) Church, is a gender non-binary character from a working-class background. (nb: Sebastian offers a thoughtful author’s note explaining why she chose to use feminine pronouns, and so I am following her lead.) And her love interest, Alistair, the Marquess of Pembroke, rather than being confused and disturbed by having feelings for someone he thinks is a man — as is usually the case in these kinds of stories — is unsurprised by his attraction because he has accepted his bisexuality. Sebastian is reimagining and revitalizing the Regency romance in exciting ways. 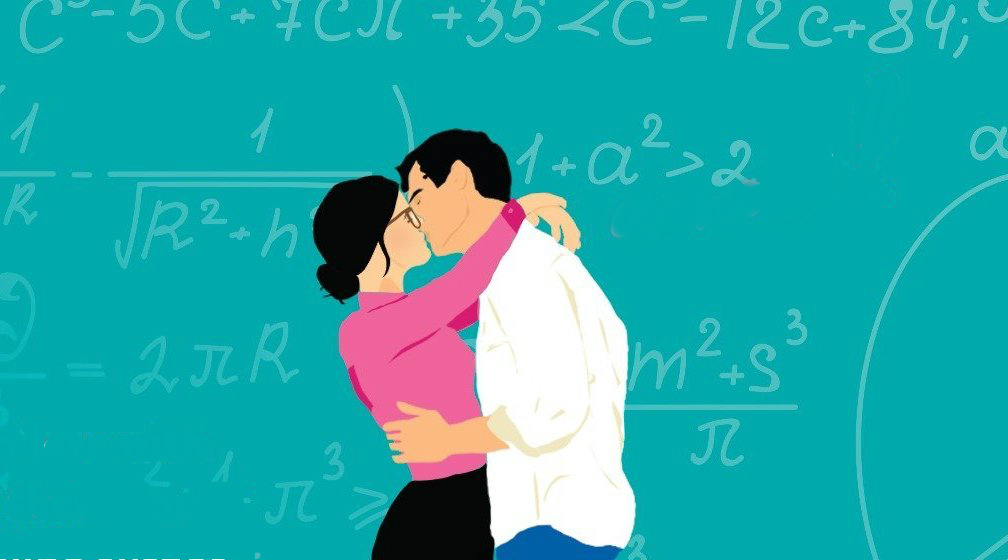