There’s probably been no more thoughtful meditation on the nature of narrative and knighthood than Italo Calvino’s The Nonexistent Knight. Calvino’s first fully fabulist outing envisions an empty suit of armor set into motion by forces no more material than sheer will and a dauntless faith in the holy cause of war. The protagonist, Agilulf, is an impatient, peckish, unidentifiable something hurtling forcefully through the world, a solus ipse trapped in the confines of his armor like a homunculus in its flask. In his thoughtful moments, Agilulf dreams of sleep, and of the detachment it symbolizes from the gleaming exoskeleton of steel and leather that surrounds and defines him, and which is not so much protection (after all, there’s really nothing inside to protect — just a breath of thought, a wisp of being) as prison.

As the book progresses, Calvino asks time and again how a knight is known. Is it by the armigerous signs blazoned on his armor? By the parlous extensity of his nom de guerre, which goes on accreting superlatives like a snowball tumbled downhill? Or is it by the heroic acts themselves, which in the end are as detachable as any helmet or greave, as likely to be misattributed or co-opted for the burnishing of a new reputation? Even life and death, Calvino suggests, are made illusory by the modularity of the romance’s form, as well as its rigidity, which, he suggests, is kin to that of the knight’s armor itself. At one point, finding his horse unresponsive, Agilulf dismounts and discovers that a Moor’s sword has pierced its heart: “The animal would have crashed to the ground long before had not the iron pieces around his flank and legs kept it rigid, as if rooted to the spot.”

The Last Knight: The Art, Armor, and Ambition of Maximilian I, on view at the Met until January 5, 2020, shares many of the same concerns, and offers an interesting meditation on the purposes armor can serve when its immediate use-value has been tossed aside. Following the life of the titular emperor, who lived from 1459 to 1519, the exhibition charts the development of Maximilian’s powerful ambitions and their complicated interplay with the medieval ideal of knighthood. A political novice, Maximilian married Mary of Burgundy, the daughter of Charles the Bold, in 1477, only to have her die on him five years later; an outsider in his new rule, he was forced onto a lifelong course of legitimizing himself and his rule, which manifested conspicuously in a fetishy love of armor and tournament fighting. In the baroque public relations battles Maximilian waged, suits of armor, gifted to foreign leaders and knights, served as mobile monuments, symbols of both imperial fortitude and fine taste.

The insinuation of Maximilian’s delicate realpolitik into a storied craft tradition is interesting to witness — the armor that lines the halls is strange and rarefied, always bending away from the human; it is bloated and ponderous one moment, impossibly svelte the next. In a suit of field armor designed for Maximilian when he was 20 years old, an obvious warping of the human form is at play. The armor features an exuberantly hooded helmet, an alluringly hourglass-shaped waist, and talon-like toes, which were meant to imitate fashionable shoes, a reminder that in this late stage of armor development, design often centered on flourishes and the imitation of the more softly sartorial. Simulations of lightness and the flow of fabric stipple the exhibition, as though the steel itself were suspiring willfully, bending and contorting itself to accommodate the ideals foisted upon it. Elsewhere, bulkiness prevails, as in a set of foot combat armor made for Maximilian sometime before 1508, which looks at first glance like a medieval diving suit — its presence is overbearing, impermeable, with the air of a walking tomb.

It’s sometimes hard to escape a sense of claustrophobia when wandering through The Last Knight. So much of the armorer’s job — especially in Maximilian’s time, when most fights had devolved into feats of playacting — seems to have been about increasing immobility, tamping down the range of motion available to the knight in the name of protection. One of the strangest-looking objects in the exhibit is a padded coif worn during the joust of peace, a form of mock combat that employed blunted lances. Designed to immobilize the wearer’s head within his helm, the coif is a creepy mass of mud-colored wadding and straps that looks like something Buffalo Bill might have sculpted if he’d had but world enough and time. To the extent that armor functions as a method for  inscribing oneself upon space — for asserting one’s form and extension — the late-blooming works on display in The Last Knight feel counterintuitive; while directly preventing death, they nevertheless reduced the subject to a state of corpse-like stillness. Preservation, taken to its extreme, turns into puppetry.

In fact, Maximilian’s tournaments were veritable salmagundies of mock combat variants, which served to portray his court “as a chivalric academy” of sorts. The removal of death from the tournament scenario — its conversion into a sort of large scale Borgesian festspiele — resulted in the creation of strange new mechanisms that heightened the drama while preserving the safety of its participants. On view are three mechanical breastplates, made of steel and copper alloy, that would have been used in the joust of war; as the exhibition notes explain, “each breastplate would have carried a shield in the front that was ejected via a spring-loaded mechanism over the knight’s head when struck by an opponent’s lance.” Fantastically engineered, these visually stunning contraptions stand as symbols of the absurdly complex engineering that went into the sustainment of the romantic ideal of combat, and the reticulations of artifice necessary to breathe life into the dying embers of chivalry.

At times, the exhibition can be dizzying — room after room presents an endless parade of cuirasses and pauldrons, sallets, bevors, and armets, covered in delicate fretwork, flute-like sprays of etching, or brocade patterns meant to simulate the appearance of fabric. Walking through the rooms, a certain horror vacui begins to rise up around you like a fog, gradually thickening until you find yourself standing in front of an elaborate shaffron. The shaffron, a horse’s helmet, hovers on its stand, empty as a mask; you can’t escape contemplating the absent burden the horse would have taken on when donning the shaffron — the sheer weight of it, the curtailing of vision, the unwieldy fit. A strange aesthetic of silence reigns in the exhibition, a gust of all that remains when the bearers of these mobile billboards have disappeared.

Documents in the exhibit help to clarify the high-handed touch Maximilian often employed when it came to armor craft, often presuming to lecture the masters on the finer points of their craft. In a letter from December 12, 1516 to the Austrian armorer Conrad Seusenhofer, Maximilian ordered a suit of armor for an 11-year-old German prince, and placed an emphasis on Seusenhofer’s “using bolts… so that [the armor] will fit the boy’s growing body for at least three years.” The image of little princes in age-appropriate armor, swaddled like tin soldiers in their ceremonial carapaces, is oddly tragic, though unintentionally so. Maximilian’s foresight, with its emphasis on control and increasing the armor’s flexibility, in fact only makes the armor more constrictive — the young princes, you realize, were not even allowed to outgrow their armor, to escape it through the simple fact of biological time.

Since the exhibit itself isn’t designed with an emotional core in mind, its moments of poignancy are doubly unexpected. In a milksoppy portrait of Philip I from 1490, the 12-year-old prince stares out with groggy eyes, his skin sallow and his mouth slackly ajar — he seems sickly, feeble, pale, a weak vessel for Maximilian’s ambitions. Set close by this portrait is a cuirass designed for Philip when he was seven years old, a simple, gilt-edged affair, remarkable only for its size. The imputation of war to the bodies of young princes is probably the most unsettling unconscious strain that weaves its way throughout the exhibition — it’s there in the armor crafted for the fragile, changeable bodies, and there as well in the small jousting figures, cast in bronze, that Maximilian commissioned for his sons and grandsons, which are almost indistinguishable from a fantasy-based Playmobil set.

The exhibit ends with an elegant pair of steel gauntlets resting on a velvety red pillow. A curious collation of the dangerous and the delicate — the steel is stippled throughout with fine holes, like a piece of lacework nibbled at by moths, while the knuckles are mounted with sharp, thornlike knobs — these amputated symbols of grace and power are a fitting coda, a record of the outsize mania which urged Maximilian to distill his fame in steel. Armor, the exhibit seems to concede at the close, is at once the ultimate substance of power and a negation of the flexibility of life — a symbol, to use Calvino’s words, of “the void-fullness that can only be dissolved by what is light and swift and slender.” In the end, Calvino’s Agilulf is a speck of dust, a phantom ideal twirling through the void of history. Maximilian’s gauntlets, bejeweled and arest on the red brocade of a pillow, are little more than empty filigree, and offer up nothing save the memory of a pose. 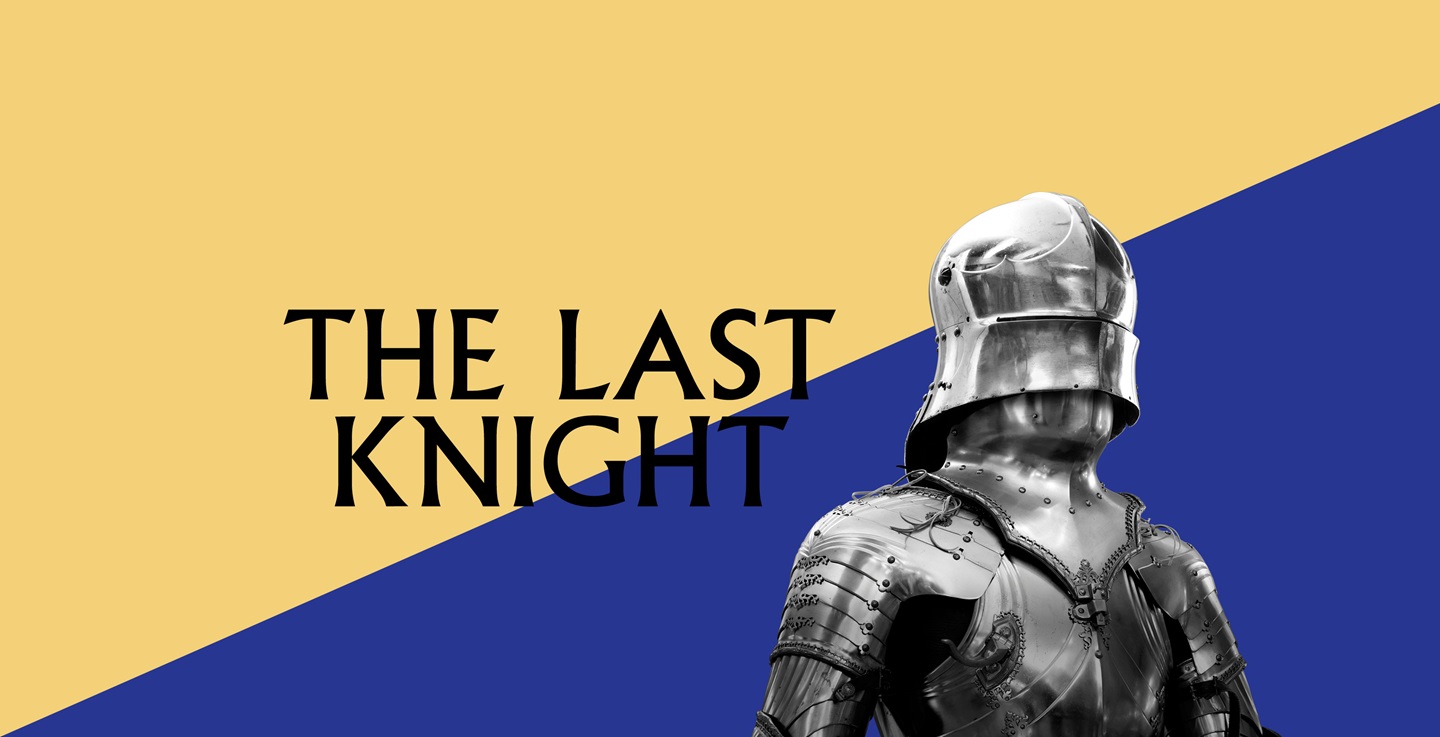