The 16th-century French nobleman Michel de Montaigne, widely considered the father of the essay, spent the second half of his life writing personal essays, and pioneered writing about such personal things as our bowel movements, our sex lives, and anything else that wandered into his private vineyard or snuck into his castle. Michael Perry’s new essay collection, Montaigne in Barn Boots: An Amateur Ambles through Philosophy, brings the essayist to life once more. Perry’s poignant, balanced, achingly funny prose is more than an ode to or critique of Michel De Montaigne. Instead, Perry uses the original essays to better understand his own life and bring a bit more humanity to an increasingly divisive world.

Through Montaigne, Perry finds a framework to examine issues as complex and urgent to our time as class, shame, and prejudice. He follows Montaigne down winding paths where even the most mundane is up for discussion: Perry comments on small towns, fuel nozzles, getting older, forgetting to turn off the water in the chicken coop, and the problematic idea that Montaigne is the patron saint of the selfie-stick and Twitter. Perry also has a refreshingly diverse reading list; he references Maria Popova, Roxane Gay, Ta-Nehisi Coates, Wendell Berry, Johnny Cash, Prince, and the pulp westerns he read as a kid. He isn’t snooty with his Montaigneian theorists either, citing anyone from the most elite scholar to amateur bibliophiles with a podcast.

Just when my eyes begin to glaze over from a bit too much theory, he throws in jokes that are both disarming and hilarious. “I wish I was smarter and could hold great minds in rapt attention. Take the academy by storm. Win all the high-end prizes,” Perry writes, “Someone did once build a giant plywood replica of one of my books and pulled it as a float in the cheese days parade, so deep fry that and eat it Pulitzer Prize Committee.”

I found Montaigne in much the same way that Perry did; not on some tidy city bookshelf, but out in the middle of the great American nowhere. Perry first read Montaigne after suffering from a kidney stone in rural Wisconsin. I first heard the words of Michel de Montaigne while cleaning manure out of a horse pasture on a farm near the Colorado-Wyoming border. I was listening to his collected essays on audiobook, because I had been warned that I would be required to read not just some of Montaigne during that first semester of graduate school, but close to every single dang word. So as the donkey snuck up and tried to steal my muck rake, Montaigne essayed on melancholy and grief.

Like Perry, I too now live in rural Wisconsin, and Montaigne in Barn Boots’s sense of place filled me with a twinge of admiration for this beautiful and often underrated state. I also chuckled as Perry opens the book by electrocuting himself with a pig fencer. If there is one thing I’ve learned in my years in farm life, it’s that nothing connects rural residents faster than swapping electric fence stories.

Perry also captures the utter frustration of those of us caught in the rift between rural and urban.  Among my rural friends I am saddened when the often misplaced fear of crime and crowds leaves them unable to enjoy the strange and wonderful variety of  the city. While my urban friends lose out on the beauty of a corn field sunrise and a good set of calluses when they dismiss the rural as backward and decaying. I have often felt alone in my love and critique for both places, but reading Perry’s essay on intersectionality and being “country dumb” made me realize I wasn’t as isolated as I thought. It was good to feel like I had a friend out there, but I couldn’t help but wonder how else people like Perry and me could better bridge the gap between the two worlds. I then wonder how many times we have both just joined in the stereotype because it was easier than doing otherwise.

Michael Perry also writes with a self-reflective decency about things that perhaps Montaigne only sort-of understood. His sections about his own sometimes crippling anxiety and depression are both matter-of-fact and compassionate. In one of the book’s most beautiful chapters, Perry critiques Montaigne’s dismissal of his wife, and then in a way that is bittersweet and earnest he moves on to essays about his own spouse.

Toward the end of the book, Perry writes: “recently I have been learning a lot from Chance the Rapper.” He finds inspiration with “how he carries himself as a citizen, as a partner, as a father, and as a self-employed artist.” Through Chance and Montaigne, Perry wants to understand how he can grow, and what he a man in his fifties can learn from the young. This juxtaposition of rapper and Renaissance essayist felt like more than a funny bookend, and instead became a call forward for both young and old as if Perry is asking not just, “What do I know?” but “What can we teach each other?” 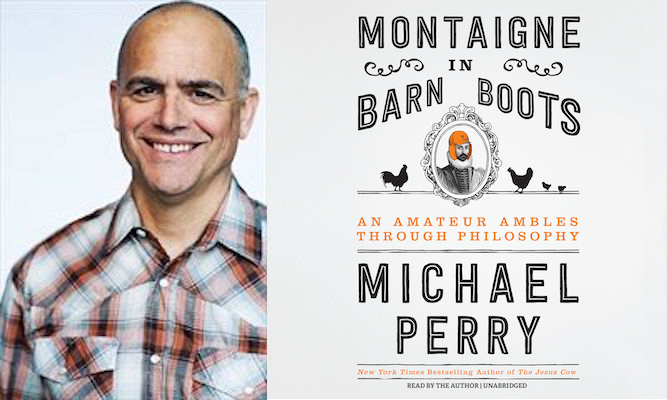