Near the end of Ray Bradbury’s life, friends visited him at home. He was 90 years old, eyesight failing, and so his friends read to him. One of those friends was Christine Bell, co-owner of the aptly named Mystery and Imagination Bookshopin Glendale, California. And some of those stories were by Ben Loory (rhymes with story, another apt name). I like to imagine Bradbury, leaning back, eyes closed, smiling as Loory’s poetic, strange, and lovely tales unfold. Later, when Loory’s first collection, Stories for Nighttime and Some for the Day, went into a third printing, the cover included Bradbury’s statement: “This guy can write!”

I bought Loory’s first book because of Bradbury’s enthusiastic claim. I bought Loory’s new collection, Tales of Falling and Flying, because it was the only place to get more. No one else writes like Loory. He treats fantasy like a journalist, relating the details in such bare, clear language that even the most whimsical stories feel like news from a Lake Woebegon all his own.

Loory’s ability to deliver the impossible like a FedEx envelope right to your door is evident in the very first line. Here are the opening lines from five of his tales. Notice how matter-of-fact he sounds:

A man wakes up one morning to find that both his feet are missing.

One night, the woman has a dream that the ocean moves in next door.

Once there was a squid who fell in love with the sun.

A boy is cleaning out his closet, when he finds a tiny monster cowering in the back.

A lady goes to church one Sunday morning and notices Death sitting beside her in the pew.

The originality grabs you first. In just five lines, there’s absurd humor, subconscious longing, pure fantasy, childhood fear turned on its head, and mortality. In a Loory tale, anything can happen to anyone: man, woman, child, squid, even Death himself.

This fable-like quality is one of the great pleasures of reading Loory, but he’s not a modern Aesop or a more surreal James Thurber. Some of Thurber’s Fables for Our Times may start like a Loory tale: “Once upon a sunny morning a man who sat in a breakfast nook looked up from his scrambled eggs to see a white unicorn,” or “A young and impressionable moth once set his heart on a certain star.” But Thurber (like Aesop) bends story and character to a moral. Fables never sail very far before dropping anchor. Loory takes the opposite approach: he cuts his stories loose.

In one of my favorites, “The Squid Who Fell in Love with the Sun,” a squid is born with a lazy eye and deformed tentacle. He’s teased by the other squids, so he spends a lot of time alone. One day, swimming near the surface of the ocean, he sees the sun. He’s never seen anything so beautiful. He tries to grab it with a tentacle, but “the sun was always out of reach.”

The other squids taunt him even more but he doesn’t give up. Noticing that birds get closer to the sun, the squid realizes he needs to fly:

So the squid set out to build himself a pair of wings. He did some research into different kinds of materials. He’d found some ancient books in a sunken ship he’d discovered, and he read the ones about metallurgy and aeroscience.

And, in time, the squid built himself some wings. They were made of a super-lightweight material that also had a very high tensile strength. (He’d had to build a small smelting plant to make them.)

Soon the squid is messing with physics and dark matter, energy reactors and propulsion systems, all in a quest to reach his beloved sun. There might be a moral here, or a dozen, or none, but if I need that, I’ll have to find it for myself. Loory doesn’t ask his characters (animals or human) to serve any purposes other than their own, and he never passes judgment on the decisions they make.

In fact, his characters seem to escape his influence entirely, finding their own way through a world where apples grow on lemon trees, swords arrive in the mail, sloths look for jobs, and aliens stop on earth to ask an ostrich how to find “the Promised Land.” This gives his fantastic tales a documentary quality. It’s wonderfully unsettling, as if Walter Cronkite is reporting from the Twilight Zone.

This kaleidoscopic reality is deepened by the everyday struggles the characters endure: finding your true identity, coping with tragedy, dealing with guilt, chasing your dreams, resisting (or surrendering to) your obsessions, breaking from society, confronting absurdity, facing death and what, if anything, may lie beyond. The very first story in the collection is about a dodo with an identity crisis. He knows he’s a dodo, but everyone tells him he’s just a chicken. He gets so discouraged, he surrenders to society’s expectations and pretends to be a chicken. He even gets good at it. After a few pages you realize you know just how that dodo feels.

Loory often begins his stories in motion, for example, “The city is in the midst of an epidemic — giant spiders are everywhere.” He rarely spends time on setup. No backstory, no detailed descriptions. The tales are already moving when you open the book, rising past you like an escalator to the unknown. All you can do is step on.

This motion is a big part of Loory’s genius. There’s a rhythm to his stories that carry you along so steadily you never stop to question the landscape. That rhythm is in the length (most stories are under five pages) and the language itself (words and sentences are beautifully carved down to the bone). “I like the way the meter adds this beat, this pulse to the story, that propels readers along,” Loory said to Steph Cha. “I think it’s kind of hypnotizing.” (For a close-up on Loory and his craft, see their recent interview.)

That rhythm is even in the layout on the page. For example, in “The Man, the Restaurant, and the Eiffel Tower,” a man longs to go to Paris, but he can’t: he has to run the family restaurant. On his birthday, his children give him plane tickets to Paris.

But, said the man, I can’t go to Paris! I can’t go see the Eiffel Tower! You know I can’t possibly leave the restaurant! I can’t accept this — though really, I do appreciate it.

But then the man’s children explained their whole plan. The man would take the plane to Paris, and they would stay home and run the restaurant.

Wasn’t it the best birthday present ever?

But you don’t know howto run a restaurant, the man said.

Of course we do, Dad, his children said. We’ve been watching you for years! We know everything! We know it all!

And finally, in the end, he was persuaded.

These breaks appear in every story, in the middle of scenes — even (like above) in the middle of conversations — until the page looks more like a sacred text than a fairy tale. It’s as if the story is breathing, or maybe this is where Loory knocked out the unnecessary chunks. And yet, the unusual spacing, like everything else, feels completely natural.

Reading these startling tales, you can’t help but wonder: how does Loory look at the same world we do, but see an entirely different dimension?

One of my favorite stories begins, “One time Picasso came and stayed in our town.” The narrator knows Picasso is a famous painter, but Picasso didn’t bring canvas or easel. Instead, he walked around with a big magnifying glass, looking at bugs. “And when he found a bug — one I guess he considered good — he’d pick it up and put it in a jar.” Picasso rented a room, arranged the bugs on the desk, and just stared at them.

The day Picasso left, his bugs went with him. Most of them, at least — some stayed. I remember we examined them, tried to figure out why — what was wrong with them, why they’d been left behind.

But to us they were just bugs, like all the other bugs.

You had to be Picasso to know.

Years pass. The narrator gets married, has kids, grows old. One day, he reads that Picasso has died. He travels to the town where the artist was born. “And as I was sitting there, a thought came to me. In my pocket, I found an envelope. Then I took a pencil and started to draw. I’d never drawn anything before… First I saw the legs, then the thorax and the head, then the antennae and the eyes, and then the wings.” As he stares down at the bug he drew, it comes to life, says “Thank you,” and flies away.

How does Loory see the world? You have to be Loory to know. But if you take the trip, if you sit down on a bench in his town, just across some invisible border, amazing things will happen. 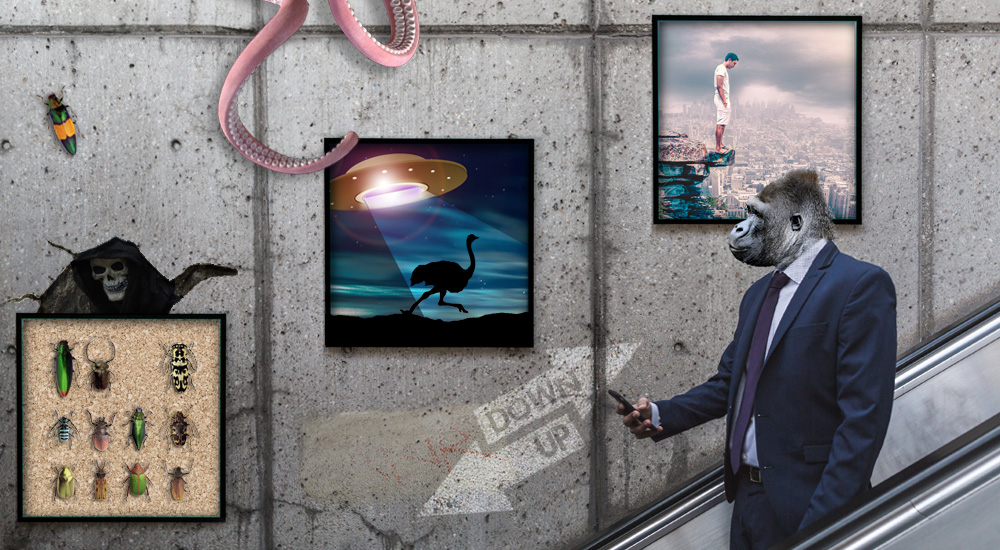