The notion of a singular “Latin American poetry” perturbs the reader who discerns the radiant gathering of traditions, ruptures, and voices among the Spanish- and Portuguese-speaking peoples of the Americas. For example, the Poesía Negra of the Puerto Rican Luis Palés Matos (1898-1959) looks simply decorative when compared to the politically charged poetry of the Cuban Nicolás Guillén (1902-1989), another voice from the Negrismo movement. The controlled sonnets of Borges bear little resemblance to the overflowing cadences of Nicaraguan poet Joaquín Pasos. The Whitman who supposedly informs Neruda proves to be a different and more tangible presence in the poetry of the Dominican Pedro Mir (1913-2000). The Mexican José Gorostiza (1901-1973) is “difficult” in a way wholly different from that of the Peruvian César Vallejo (1892-1938). And yet many poets fresh from MFA programs gush about the singular burning coal of “Latin American poetry,” which was pressed against their lips so they could sing. Roberto Echavarren’s The Espresso Between Sleep and Wakefulness may be a disappointment for these readers, who only expect the love lyrics or elemental odes of Neruda. Then again, he may be revelation.

Just as the continent’s landscape features pampas, deserts, lush forests, and rivers, so too is its poetic landscape vast and varied. The poetry of Echavarren is a vibrant jungle, a dark and devouring river, a great landmass forever shifting, with the poems’ lines expanding like “flame over water / interior exterior, / a glove reversed.” As the collection’s title suggests, Echavarren’s verse teeters on the edge between the oneiric and stark daylight; its stock in trade are “things half given away, half withheld,” as Borges put it in one of his English poems. To understand his work, one must follow the galleons as they creak homeward, pregnant with stolen gold, and then witness the Siglo de Oro. The Baroque, or the Neo-Baroque, informs these sinuous poems, which interlock and turn like worm gears. The titular poem — perhaps the collection’s strongest — invites the reader to plunge beneath the surface, to “exercise under watery depths.” Its lines seem to bob, first leaping up for air, then submerging, then rising again: “At first light / your fresh senses have not yet fluffed up. / A breath of air hardly awakens me / and then another stretch of sleep.” We must ask, with Calderón’s Segismundo, where the dream ends and reality begins, only to realize that all of life’s a dream, and dreams are merely dreams within it.

Other poems in Echavarren’s delightful collection yearn for a different kind of life, for a reality that the Surrealists sought in species neither male nor female, or in biomorphic creatures arising from dreams: “neither man nor woman / in the end more a place than a person / quasi innocent, quasi present.” Some point to that elsewhere that is “Not a point or an area of the earth the navel of the world / but the earth the navel of the universe.” Not all the poems are expansive, diluvial; some crackle quickly, but leave the same residue of mystery. “The Devil” is one of the collection’s shortest and most memorable pieces:

The experience I didn’t have:
the devil under my skin,
and while my body expired on the page
the page became a body of water….

I followed in my paper boat.
But I didn’t know what the devil was.
Rather, the devil was somewhere else,
somewhere, but I wasn’t there.

As this little marvel shows, the poems are beautifully rendered by Donald Wellman, a great poet. The Espresso Between Sleep and Wakefulness is a case study in excellence for aspiring poet-translators.

Echavarren’s role in Latin American letters is manifold; he is not only a poet, but also an influential critic and editor. He is especially celebrated for leading the resurgence of the Neo-Baroque, and editing, along with José Kozer and Jacobo Sefamí, the important anthology Medusario (Fondo de Cultura Económica, 1996). The anthology included a number of then marginal voices, who have since become major innovators of Spanish-language poetry. In terms of its impact, one can compare Medusario to Donald Allen’s 1960 anthology The New American Poetry.

On the motley map of Latin American poetry, with its numerous citadels and sea dragons, Echavarren may stand close to the Peruvian Rodolfo Hinostroza (1941-2016), whose also peers into the cosmos to see “The Love’s MISTERY that spins constellations / all is water.” For both poets, language is the water of creation, reflecting our own images and urging us to take a plunge. Over and over, Echavarren asks the reader to dive deep, to join him in his divergent streams. 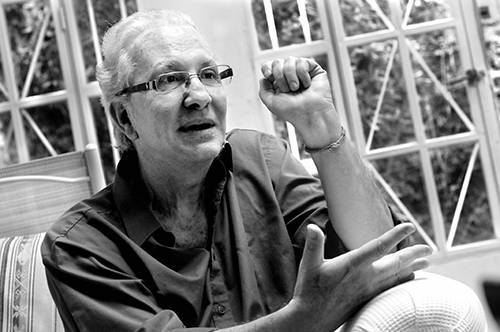