In the promotional copy for Pricks in the Tapestry, the queer poet Jameson Fitzpatrick forewarns his reader that he “[does] not always identify with the speakers of these poems, even as I recognize their speech (and sometimes, their desires) as my own.” Like many of the poems in this debut collection, the eloquence and candor of Fitzpatrick’s note works as a smokescreen. Which speech and desires does he claim, you might ask, and which does he reject? How often counts as not always? The line of questioning seems harmless enough, but once you indulge it, the text engulfs itself in flames.

The note might strike some readers as abrasive. It’s Pride Season, after all, and the summer’s iconography tends to be straightforward and uplifting, conveyed mostly by social media memes and advertising campaigns. For the queer individual who cannot identify with the “Love wins” slogans, he stands accused of militancy, defeatism, party-pooping. He smells smoke, but he doesn’t put out the fire — that would just ruin the parade. “Whatever room I am in my heart is not,” writes Fitzpatrick. “Before a mirror, which face is true / the one that moves or the one that is moved?”

Still, smoke is brewing. The legacy of homophobia persists, despite the neoliberal queer movement’s efforts to marginalize its presence. The breakout queer writers of the past decade have slyly played both sides of the ideological divide, cloaking their brutal portrayals of violence and sexuality under an elaborate layer of artifice. If you noticed the uncharacteristic enthusiasm straight readers had for Ocean Vuong’s On Earth We’re Briefly Gorgeous or Hanya Yanagihara’s A Little Life, you probably caught the pattern. Critics fixated on the “structural hallmarks” or “shock value” of the authors’ craft, then casually glossed over the queer subject matter. It was as if the pages and pages of gay sex had been torn out of their copies.

The argument is worth making, but of course, it’s abrasive — it’s heavy on radical theory and unflattering to the liberal piety of your straight allies. Fitzpatrick gets the point, and he’ll give the smokescreen strategy a try. But he understands, on a deeply intimate level, the toll it takes on the queer psyche. “Effortlessness as it happens / is what my poems lack,” writes Fitzpatrick, “but genuinely / if I’ve got anything going for me it’s / my difficulty.”

Perhaps the sole drawback of Fitzpatrick’s debut, then, is that it might alienate those who are late to the conversation. But the conversation must move forward, and Pricks in the Tapestry poises Fitzpatrick as a brilliant, alluring mediator.

The poems collected in Pricks in the Tapestry, some of which were published in Poetry, The New Yorker, and The Believer, comprise a coming-of-age tale. Fitzpatrick’s mid-twenties were a time in which he learned “the insufficiencies of the self as subject,” but once again, his eloquence conceals an uglier truth. When a speaker recalls his childhood bullies, for instance, he wonders if he should “raise hell and maybe make a YouTube video which I parlay into some small fame.” But Fitzpatrick knows better than to yield to an escapist fantasy: “I get revenge / only on the people who owe it / to me, who is no one.”

Here, the subject of gay male selfhood proves especially insufficient. But the self fails elsewhere in the collection, too. On a momentous trip to Fire Island, that fabled haven of sex and sunshine, the speaker finds himself “watching / from the blue periphery / as they flex and pose / for a photo.” In both scenarios, Fitzpatrick examines popular media portrayals of white gay men and pinpoints a specific habit of vanity and mythomania. If you find the speakers pedantic, that’s part of Fitzpatrick’s critique. Shallow gay men are frequently obnoxious, but so are the sanctimonious ones.

Fitzpatrick employs a wide range of disciplines in Pricks in the Tapestry, from the lyric and confessional modes to hybrid memoir, medical literature, and activist eulogy. Derek Jarman and Frank O’Hara make welcome appearances, but so do Kierkegaard, the DSM-5, and Linda Villarosa’s 2017 reporting on the racial disparities present in HIV infections. One particularly striking passage consists of a prose essay dedicated to the poet’s late uncle, whose untimely death from AIDS loomed over Fitzpatrick’s upbringing. In this passage, arguably the collection’s centerpiece, Fitzpatrick fully demonstrates the rigor and precision of his craft. His insights, though, won’t cheer you up. “Though I demonstrated little care about my own sexual health as a teenager, I was interested in HIV/AIDS as a subject,” he writes. “I liked the idea of it, this blood amulet, I’m ashamed to admit. As if it could justify what little care I continued to pay.”

In passages like these, you’re tempted to call Fitzpatrick a party pooper — rather than rendering a catharsis, he urges you to consider why you expected a catharsis in the first place. It’s harsh, but for what it’s worth, Fitzpatrick is at his harshest when he cuts through the smokescreen and addresses himself. Images of self-harm, bulimia, and violent sex recur in Pricks and the Tapestry, their presence mimicking the circular logic of trauma flashbacks. An unyielding lover named Jacques slips in and out of the poems, and his vanishing act situates these behaviors within a broader cycle of self-sabotage. “I told him I would die without him. / I died.,” writes Fitzpatrick. “That was the worst thing. / No, coming back was the worst thing.” Here the poems turn gaudy and vulgar, completely wrong for Pride Season — yet Fitzpatrick’s excesses feel authentic, his revelations glorious.

Pricks in the Tapestry delivers few of the straightforward pleasures that the neoliberal queer movement asks of its writers. You might not understand Fitzpatrick’s intentions until the third or fourth read; his debut is heavy and rigorous and, yes, abrasive. But this summer, it’s a deeply urgent release. Smokescreens are barriers, of course, but Fitzpatrick happens to know the way out. 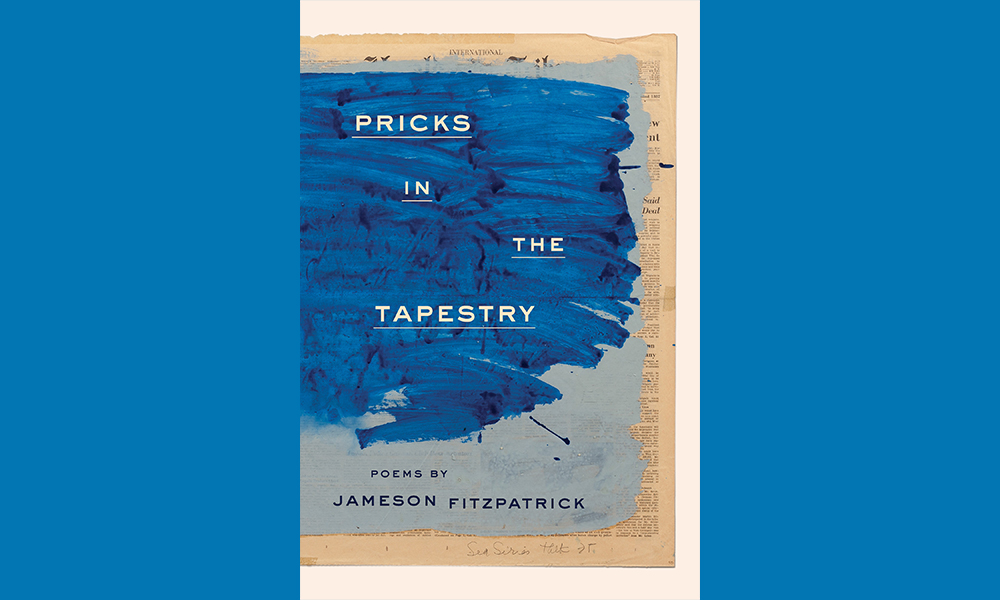