The German filmmaker and visual artist Hito Steyerl is the great glossator of late capitalism. At once a prophetess of disintermediation and digital-age sleuth, she’s comfortable both with gumshoe work and critical theory, churning out works that chart the ramifications of our increasingly image-based culture, that dwell on drone strikes and dancing, on ecological disasters and the genealogies of mass-produced images. In her 2013 work How Not to be Seen: A Fucking Didactic Educational .MOV File, for instance, digitally rendered ghosts gradually and in increasingly disturbing ways come to model the experience of populations displaced by civil wars or natural disasters. In an age of insubstantiality, digital metonymy becomes a salvific modus operandi, locating critique in the hazy sphere of projections and modelling technologies. The appeal of her thematically diverse critical writings lies in the way they harbor a redemptive drive somewhere beneath the diatribe, an attempt to reorient praxis.

By and large, Steyerl’s work is dedicated to picking apart the self-serving, symbiotic mythologies of technology and late capitalism, which she accomplishes by revealing their seediest interpenetrations, casually occurring on the quotidian plane of the internet or within the rarefied spheres of geopolitics and the international art market. Drill, a recent installation at the Park Avenue Armory, which hosted the work from June 20 to July 21, see Steyerl’s focus turning to the American epidemic of gun violence. Grander than many of her previous works, and oddly polished in comparison to her smaller installations, Drill manages to both disturb and deconstruct, offering up a prismatic reflection on weaponry and modes of control in the 21st century. Devised as a video tour of the armory itself, the film bores through spatial and ideological palimpsests, interspersing on-site interviews with gun violence victims and gun control advocates with footage from 2018’s March For Our Lives rally in Washington D.C.

The physical setup of Drill is composed of a central screen buttressed by two angled, anterior screens, which together form a slight concavity. Walking into the drill hall, a massive hangar-like space, you’re overcome, at first, by the dense, velutinous darkness, and the attendant feeling of sensory deprivation. A daunting amount of space seems to open up invisibly around you in the cathedral-like stillness. The film’s soundtrack — largely atonal, indeterminate music à la John Cage — is pumped ambiently through the space by black speakers plunked down like boulders in the dark, and in the center of the hall a Blade Runner-esque hieroglyphic of glowing white lines sprawls across the floor, gradually resolving into the form of a floor plan. Small cubes for sitting are scattered before the screens; it feels, strangely, as though the audience were watching the film from the future, gathered in the high-tech video-dome of some silicon-bright 25th-century utopia to learn about the miseries of the past.

This feeling of temporal displacement is one of the installation’s cornerstone affects. The compression of space, or the bleeding of one space into another — the imbrication of a construction site, for instance, and its digitally revamped model, replete with computer-generated trees and render ghosts jerkily miming their midday promenades — is one of Steyerl’s typical hobbyhorses. When we learn, over the course of Drill, that the armory’s drill room frequently doubled as a ballroom, and that in the 1920s a Mars-themed dance was held there, replete with towering, fantastic mushroom structures, Steyerl’s intent is clear. The strange, off-worldly atmosphere of Jazz Age socialites twirling through a rufous fog seems emblematic of elite detachment, and there’s a stark irony in the fact that the armory should go to such expense to create a new world in the drill hall when depressing social realities begged to be recreated just outside the armory doors.

Drill does a good job of teasing out the technical ideologies behind the epidemic of gun violence, including the classically capitalist motives behind the National Rifle Association’s founding. Elites, as we learn, were shocked by the wasting of bullets fired off by poorly trained soldiers, and as a result they sought to form a group that could turn soldiers into sharpshooters, thereby increasing efficiency. The disturbing implications of these underpinnings are prefigured in Steyerl’s essay “How to Kill People,” where she describes the “design of killing” as “smooth, participatory, progressing and aggressive.” The “progressing and aggressive” character of design is evident in that it not only creates better guns — part of the pathological inaccuracy of the Union soldiers stemmed from the fact that they were used to wide-muzzle, smooth-bore muskets — but in turn necessitates the designing of human beings. Death-dealing designs, as Steyerl suggests, have a tendency to leach out, jumping from object to subject with the unthinking rapidity of a virus.

The real focus of the installation, however, is on the victims of gun violence. Steyerl’s interviews with the disturbingly diverse cast of victims — some of their traumas are only a year old, while others have carried their wounds for decades — make up the heart of the installation; strict narratives are eschewed in favor of allowing the victims to freely contemplate solutions based on their own experience, or simply to recount fragments, impressions, and disconnected observations. Kareem Nelson, the founder of Wheelchairs Against Guns, sits, for instance, in his wheelchair before a roaring fireplace, reflecting on the violence of his youth. Paralyzed from the waist down since being shot in the back in 1995, the Baltimore native moves from topic to topic, and recalls that in the 1980s, guns were easy to come by, but bullets were far harder to obtain. The solution he offers is simple, almost tentative — why not regulate, with the toughest laws possible, the buying and selling of bullets?

As a deeply plausible workaround, the proposal strikes a spark of reason, but of course Steyerl, in her framing of the interview, doesn’t mean it as an ultimate solution. She’s more interested in the fact that it’s a spot-on inversion of the practical concern that created the NRA — namely, that soldiers were wantonly wasting valuable bullets. It’s a striking parallel, one that points out the absurd recursiveness of gun violence (whose origins in placing an inordinate value on bullets might also be a solution) while also indicating dimly the need to search for solutions in unexpected places. What’s striking about considering Drill now, however, is the way certain aspects of the installation can seem oddly precious or twee. This isn’t so much the fault of Steyerl as it is a grotesque symptom of the exponentially growing rate of shootings in America — already Drill seems to belong to another era, one in which Americans, while growing accustomed to bi-monthly acts of gun violence, hadn’t yet been exposed to a full weekend of literally back-to-back shootings. If Steyerl comes out of the installation with a clean moral slate, it’s because she’s not really pontificating, but rather presenting.

The central gesture of Drill is that of a reclamation of space. In the armory, defense and glamor lasciviously intertwine their limbs; the baseline poshness of the building at large amounts to an absurd conflation of the bellicose and the beautiful. We learn that the basement of the armory, a shooting range still studded with the engrams of century-old bullet holes, flooded in the early twentieth century, the lead bullets stored their gradually poisoning the captive water. The poised violence inherent in cached bullets is thus figured as an ecological threat, an insidious leakage of constituent parts into an immanent whole. Once again, the idea of leakage is carried over into the story of a victim. Nurah Abdulhaqq, a gun control advocate affiliated with the National Die In, is one of the most prominent faces in Drill (her shots, typically head-on, are filmed in the massive drill hall). First exposed to the problem of gun violence by the death of a cousin and later galvanized by the Parkland shooting, Abdulhaqq recalls the insidious leakage of violent threats into her Facebook feed — it was common for other high schoolers, following a shooting, to post images of guns accompanied by jokes.

Perhaps Steyerl’s most striking observations center on the idea of control. The most persistent image in the film is that of the Yale University Precision Marching band weaving across the floor in the day-lit drill hall. These shots, swirling and elliptical, effortlessly call to mind the flowing grid on the drill hall floor and its latent suggestion of order imposed, of restrictions made on movement. While indicative of Steyerl’s interest in the fascism of patterns and formations, the fluidity of the marching band’s routine only increases the fascistic aspects of instructed movement, as a smoother execution requires more and more precision, demonstrates greater and greater levels of discipline and control. The shots call to mind Edward Said’s capsule summation of Foucault’s theory of power, in which he describes how “for power to work it must be able to manage, control, and even create detail: the more detail, the more real power, management breeding manageable units, which in turn breed a more detailed, a more finely controlling knowledge.”

Control, of course, means many things to many people — what to progressives seem common sense gun control measures can strike conservatives as infringements by an overpowered state. But gun control is of course aimed at greater freedom — the freedom to move about, unhampered by the fear of being randomly (or worse: calculatedly) gunned down. Anti-restrictionists seem never to recognize that a rabidly pro-gun culture tends to the ramification of more and more abstruse policies meant to preserve the availability of guns — one only has to think of the absurd suggestion, made by figures like Sean Hannity after the recent shootings in Dayton and El Paso, that every public school should be stocked with armed police officers. It’s no coincidence, of course, that Steyerl’s shots of the marching band are redolent of children marching to classes in rigorous line formations, or twirling and dodging through crowded hallways in between classes. The marching band becomes a symbol of control run amok, a heightening of the restrictiveness that’s the unconsidered endgame of so many propositions aimed at the preservation of a fatuous freedom, one that eats away at other, more precious liberties.

The film’s final section sees Steyerl digitally defrocking various portraits in gilt frames lining the armory’s walls, replacing their contents with videos of students speaking at the March For Our Lives rally. In itself, this might be a kitsch act, a simply performative enthronement, but Steyerl manages to salvage the images by roughly suturing the videos to their frames. The digital jitter at the videos’ margins and the disturbing not-quiteness of the overlay suggest a process of circulation, implying that this isn’t the videos’ final resting place. The film’s epigraph, “History is the act of hiding whatever is in plain sight,” hangs over these final videos, since fineness of presentation is one way of hiding something in plain sight — a gilt frame distracts the eye. Steyerl offers up a nervous circulation that mirrors the strange afterlife of tragedies today, when videos of victims, and sometimes of the incidents themselves, jump from feed to feed, inhabiting an uncertain sphere of circulation that, while largely controlled by algorithms, is still, at its core, ruled by human inclination, by what we choose to share. It’s no wonder that Drill often feels like a tour of a haunted house, with the specters of old glamorized violence turning through the musty, fin de siècle halls. The haunting return of violent ideologies of control and efficiency is paralleled by the haunting return of images, which — no longer chain-bound, like the phantasms of old, to the sites of their earthly suffering — are haunting precisely in their adaptability, in their tendency to flit about and settle, disruptively, wherever they may. 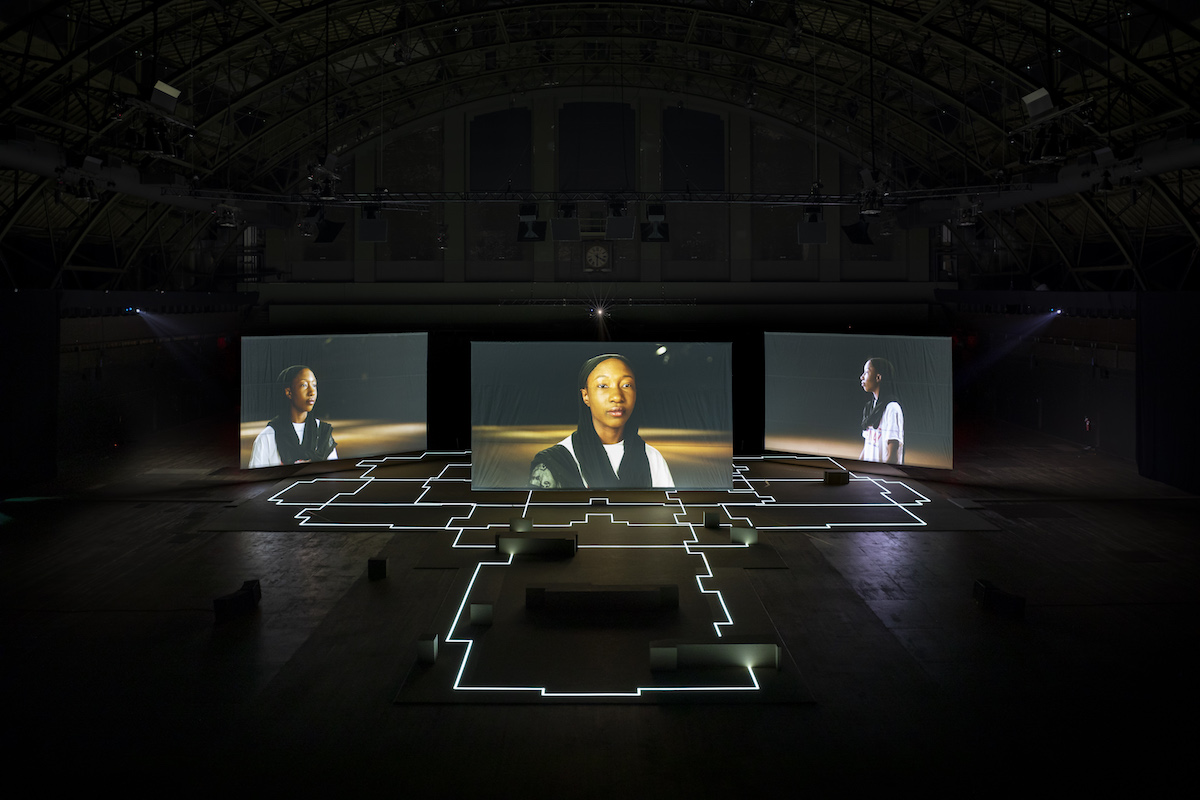