In the uproar that greeted revelations of the scandalous Rudy Giuliani in the new Borat movie, little attention has been paid to the film’s depiction of race, even as Kazakh activists denounce the film as xenophobic. But despite the prominent place that the politics of representation has assumed in American pop cultural analysis, review in outlets from The New York Times to The Guardian assess the film solely as an exercise in American credulity, never acknowledging its depiction of Central Asia. Even Masha Gessen, who as a one-time Soviet citizen might have shed real light on the film’s failings towards their former compatriots, made virtually no mention of Kazakhstan in their Borat write-up, instead opting for a rather forced comparison to Russian political meddling. Yet the film’s very ability to capture incidents of American racism, misogyny, and antisemitism is contingent upon tarring Kazakhstan with the same brush — and in the process painting an image of Central Asia that is so distorted as to be unrecognizable to anyone who lives there.

Recognizing the need to orchestrate ever-greater shocks to wring a laugh from his 2020-weary audience, Sacha Baron Cohen repeatedly shifts his focus to what he sees as more comedically fertile ground, at times completely doing away with his stated purpose of exposing American conservatism. When Borat walks into a Georgia synagogue dressed as an antisemitic caricature come to life, there are no neo-Nazis there for him to pinion — just his own ridiculous costume, his own ridiculous accent. By the time the viewer reaches the debutante ball scene where Borat’s daughter (played by Maria Bakalova) repeatedly exposes her bloody genitals on the dancefloor, the satirical center of gravity has swung away from the US and towards the Kazakh culture that Baron Cohen has decided to mock.

But the Borat sequel is only the latest entrant in a long cinematic history in which Central Asians have been cast as the frontier-dwelling “Others” against whom people in the West might construct their own identity. When the very first Soviet film about the region, the luridly titled Minaret of Death, was released in 1925, many local viewers reacted with dismay at the slew of inaccuracies that greeted them on the screen. The movie’s aesthetics were the products of designers who erroneously equated Uzbekistan with the Arab world, with interior shots filmed on Leningrad sound stages that bore little resemblance to 19th-century Bukhara and took its cues instead from popular films like The Thief of Baghdad. Minaret of Death’s plot is a blend of harems, kidnappings, evil emirs, and improbable romances — exoticizing pap for an audience that was hungry for novelty and not particularly concerned about historical accuracy (for which, it should be noted, the film was roundly denounced by critics). Movies of this type, which dramatize the cruelties of life prior to the tsarist conquest of Turkestan that set the stage for Soviet rule in Central Asia, asked Russian audiences to imagine that their military intervention had saved their “brothers in the East” from such a life in the present.

Just as Borat’s final sequence hails the “introduction” of the internet to Kazakhstan, Soviet films beginning in the 1920s trumpeted the arrival of various technologies, institutions, and scientific discoveries to Central Asia from the West. Turksib (1928), a documentary celebrating the construction of a railway between Tashkent and Semipalatinsk, implicitly casts the region’s inhabitants as a technologically “backwards” people who needed to be lifted into the modern era not just for their own good but for the good of the USSR. At the same time, filmmaking and film distribution themselves were consciously mobilized as part of bringing “modern” culture to Central Asian communities: the production company Vostokkino (East Cinema), which made Turksib, was founded with the explicit intention of creating agitprop for and about the minorities of the Soviet Union with the ultimate goal of strengthening the Union as a whole.

The most prominent Soviet film genre in which depictions of Central Asians featured was the so-called Red Western (or Ostern, after the German word for east), which transplanted the style and tropes of cowboy films onto the steppes and deserts of the Soviet Union. Typically set during or in the wake of the Russian Civil War, the films often revolved around Red Army soldiers squaring off against monarchists or indigenous anti-communist militiamen. For Soviet directors, many of whom revered John Huston, the parallel was immediate and appealing: the settlers heading east from the Volga were pioneers building socialism just as America’s pioneers heading west had forged a nation (and here we may pause and note the glaring omissions in that account of events). But though Red Westerns took place on the shores of the Caspian Sea or among the dunes of the Qizilqum Desert, they were often as much if not more about Russianness than they were about Central Asianness. As the Russian literature scholar Ingrid Kleespies writes, “the frontier is understood  to  mark  the  outer  edge  of  the  self,  the  nation,  the  empire — and  this  outer  edge  is  precisely  the  point  at  which  an  entity comes to know itself through contact with an ‘other.’ It is at the limits and edges that identity is made, even identities based on the very notions of expansion and outer limits.” As such, the logic of the genre (as well as its commercial appeal) relied on an idea of Central Asia as a marginal zone.

Arguably the most famous of all Red Westerns is White Sun of the Desert, in which the plucky Comrade Sukhov is waylaid on his return from fighting in the war when he is tasked with protecting the wives of a local anti-Bolshevik fighter who had abandoned them. Many of the film’s lines have become iconic — including, tellingly, “the East is a delicate matter,” uttered by Sukhov towards the beginning of the film. Like the Westerns whose image of the American Plains was of an empty expanse waiting to be tamed, the town in White Sun of the Desert is eerily devoid of people, with much of the architecture consisting of half-crumbled Timurid ruins. Sayid, an austere Turkmen Tonto analogue, speaks in a curt monotone offset by Sukhov’s jovial expansiveness, his sentences often consisting of a single word. A group of white-bearded local elders are similarly depicted as silent, inscrutable, and uncomprehending: they react not at all to Sukhov’s exclamation that the box they’re sitting around is full of dynamite until the exasperated soldier demonstrates an explosion before their impassive faces.

As much as White Sun of the Desert is about Sukhov’s defeat of the local indigenous rebels who pursue him and the women, it is also about his civilizing mission as he attempts to inculcate the harem with Russian values. He exhorts them not to cover their faces in his presence (in the 1920s, Soviet authorities conducted public burnings of the paranja, the horsehair burqas worn by Muslim women in Central Asian cities) and preaches the virtues of monogamy. By contrast, adhering to Central Asian traditions is cast as perilous: at one point, in a moment of counterrevolutionary weakness, Sukhov begins fantasizing about creating his own harem, and the sweet dreams this lulls him into allow the rebels to stalk into the town unnoticed. The Borat sequel attempts to reprise this feminist redemption arc, charting his daughter’s transformation from an unwashed stable dweller to a dolled-up Tomi Lahren lookalike under the tutelage of the Southern women she meets on her American sojourn. When she eventually returns to Kazakhstan, she lands a top journalism job — a transformation that would not have been possible, the film implies, without her exposure to the US. Fishing around for an uplifting ending, Borat alights upon the idea that vanilla liberal ideas might be given the gloss of the radical if set against the medieval values that the film attributes to Kazakhstan. Unlike Comrade Sukhov, Baron Cohen is no revolutionary, and making his political horizons seem lofty and noble requires a caricature of an Other more extreme than anything Minaret of Death or White Sun of the Desert ever had to offer.

In a curious and thought-provoking essay for The American Historical Review, Kate Brown recounts visiting the steppe city of Karaganda and being struck by the feeling that she “had landed not in Central Asia but in the American middle west, in Wichita, Topeka, Bismarck, or Billings.” “Kazakhstan and Montana are nearly the same,” she writes, not only because of their similar precipitation patterns and use of grid-like urban layouts but because both are places deeply marked by violence and death: gulags, atomic bomb tests, and the mass starvation caused by collectivization in the case of the former, the genocide of America’s indigenous peoples in the case of the latter. There are intriguing similarities and intriguing contrasts to be drawn between these two places, but these would require a defter hand than most to draw out. Perhaps someday someone might make a film about them. 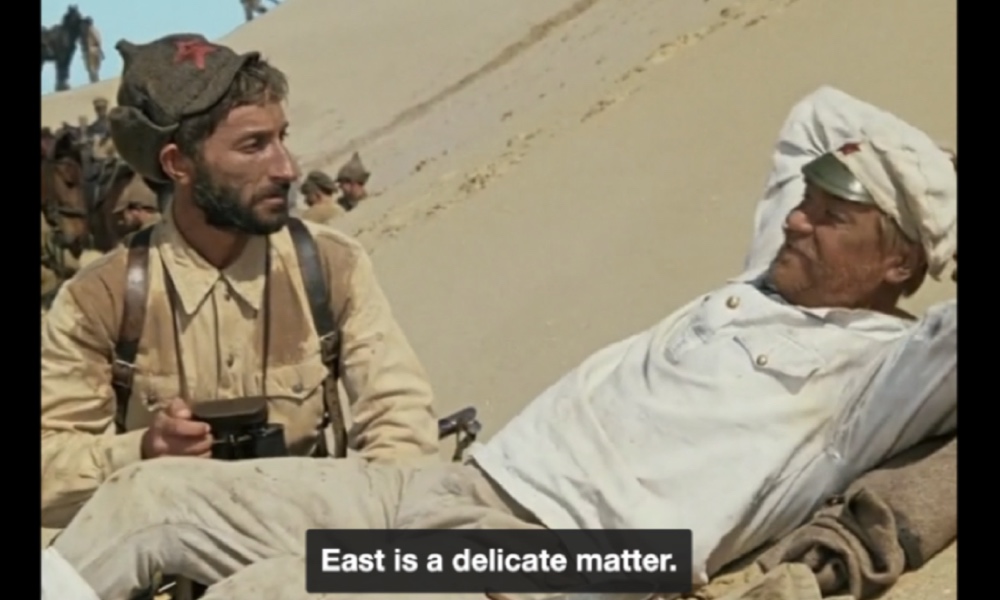