A photograph by British artist Josephine Pryde accompanies Natasha Stagg’s new collection of essays, Sleeveless: Fashion, Image, Media, New York 2011-2019, out now from Semiotext(e). It depicts a woman (presumably) holding a cigarette between lilac-manicured fingers. The cigarette is right at the end of its life, ash scattered on what looks like an iPad screen — a black mirrored surface collecting dregs that resemble cocaine.

The woman wears a shirt that reads “Sorry” with a slash through it, alluding to the Millennial adage: “Sorry Not Sorry.” The phrase usually takes the form of a hashtag or as an addendum to a statement that has been said with some known risk. It is what one says to their “haters” as a response to criticism. It’s a double negative, a self-cancellation, apparent in the syntax itself. I could apologize, but I won’t. It reveals one’s indifference or disinterest in giving what is expected or perhaps warranted. Rather, it suggests an indulgence and asserts some merit in being “unapologetic” about one’s actions, desires, or opinions. It expresses a distinct individualist mentality, protection of oneself from criticism of something that she knows may be perceived as wrong (evident in the impulse to apologize in the first place).

The image of the woman projecting this statement while ashing onto her device is a perfect representation of the type of Millennial woman whom Stagg profiles throughout this collection of essays, never exempting herself from being one of them. This woman does things with a shrug while collecting ashy remains on the surface of her phone screen.

With her deadpan wit and the aloofness of her voice, Natasha Stagg is our most trusted reporter on this era. Like the Beat poets and Joan Didion, Stagg has a keen eye on her contemporaries, approaching them with skepticism but still wanting to be invited to the party and take part in the perks (after all, one must go out at night in order to see what’s going on). Stagg mimics the general apathy of late capitalism, simultaneously aligning herself with her peers and distancing herself from them, at least for the sake of reportage.

In the essay “Confidence,” Stagg profiles model and influencer Alexandra Marzella, who identifies herself as an artist — a catchall term she uses to characterize her practice as a social media user with a significant following, a model, and a sex worker. It’s unclear if Stagg considers this woman an artist too, but she seems to shrug when the influencer suggests that she is. Sure, Stagg’s tone implies. Might as well be. As any good journalist, Stagg doesn’t set herself up as a judge. And as a good Millennial — over-stimulated and fatigued — she knows her own judgment doesn’t really matter. “Not that I’m judging,” she writes. And she’s not. Rather she quietly nudges the reader, asking her to evaluate what she has rendered in black and white. While many of her takes are critical of contemporary culture they are also somewhat resigned to the fact of ever-expanding late capitalism and the inevitable confrontation with its colonization of all aspects of a life.

With essays on the branding ethos of Abercrombie & Fitch, the Kardashians, EDM festivals, and #MeToo, the book documents encounters with pop culture and fashion that are the 21st-century equivalent to Didion’s observations of the culture wars in the summer of 1969. But Stagg’s five year-old on acid comes in the form of an artificial intelligence Instagram influencer with brand sponsorships.

In many of her essays, Stagg returns to contemporary culture’s unique obsession with mediocrity — anything requiring too much effort, effort that we don’t have the time or attention span to give, becomes unattractive. The anticipation and representation of something is more appealing than the thing itself. Anything that exists in a sort of mid-level range, that’s knocked-off or franchised, Stagg observes becoming the thing at the center of culture, except there is no center or top, only a shiny flat surface.

In “The Drop,” about EDM rave culture, she writes:

I found myself lost in the hedonistic energy of the crowd that — ill-intentioned or not — simply wanted to get away for the last few days of summer in a sky of confetti slowly falling through beams of white light. For the fourth or fifth time, I heard one of Zedd’s hits, even if he wasn’t there: “If our love is tragedy, why are you my remedy?” and finally felt the meaning: How can something this positive in essence end up so heartbreaking? A sea of hands reached up, and found no tangible answer, only another anticipated drop.

The anticipated drop is the thing that thrills. The feeling of anticipation is more satisfying than the proceeding event. With such oversaturation one begins to crave something bland: a mid-level influencer who lives in the Midwest, shops at the mall, and doesn’t take too many fashion risks is more appealing than the mega-celebrity whose life is bizarre and unattainable. Real people lacking a particular talent are more relatable than those possessing one, and those who are neither real nor talented are just as good (see: Lil Miquela).

Stagg suggests the same idea in an essay about the Kardashians called “Right Place.” She writes, “Kim is every race and no race, smoothed and bronzed and contoured beyond natural indicators… they [the Kardashians] get treatments in order to appear prettier for the very same audience watching them get work done. Treatments are more closely documented than the results.” Smoothed and flattened is best. The results become irrelevant but the existence in a limbo is pleasurable. The initial goal forgotten, there is no goal anymore, just a simulation of one. The mechanisms at work behind celebrity have become transparent there is no longer a need to conceal one’s desire fame, sometimes it’s seen as brave to sell out. She writes of Kim, “Maybe she’s not the void at all, but a surplus of the behaviors we were once told to suppress, like mixing business with pleasure.”

Writing from within the world of fashion PR and brand consulting, Stagg is a kind of double agent. She is a voyeur of her friends and her enemies and herself. In her choice of subject and genre, she emulates the trend cycle she observes. Many of the pieces are reprinted from the past eight years, about fads that never really picked up or a celebrity’s Instagram account that is now deleted. To write about things so contemporary and recent in cultural memory, Stagg risks not being taken seriously, dealing with subjects that have not yet been inducted into a cultural canon or deemed worthy of study. At the same time this renders her relatively incapable of trite nostalgia and places her on the cutting edge. And I happen to believe that the best assessments of culture tend to come from a reserved cool girl who is not jaded but just a little bored. The cynicism is there just enough; you don’t feel excluded, but you want to know what she knows that you don’t. This has become something of a brand itself (I follow her on Instagram).

Stagg offers no antidote. There’s no solution or call to action proposed, just an account of demise and a list of fears. She puts it bluntly when she writes, “My fear was that guilt would destroy the classics and there’d be no one left to fuck. All movies would be as low-budget and as puritanical as the stuff they play on Lifetime, all of New York would look like a Target ad, every book or article would be a cathartic tell-all, and I’d be sexually frustrated but too ashamed to hook up with assholes, or even to watch porn.” When I live in this Target ad, as I witness the further personification of corporations via sexy avatars of social media — and then the conflation of this with art — I know I’ll want to commiserate with Stagg. And maybe have a cigarette. Sorry Not Sorry. 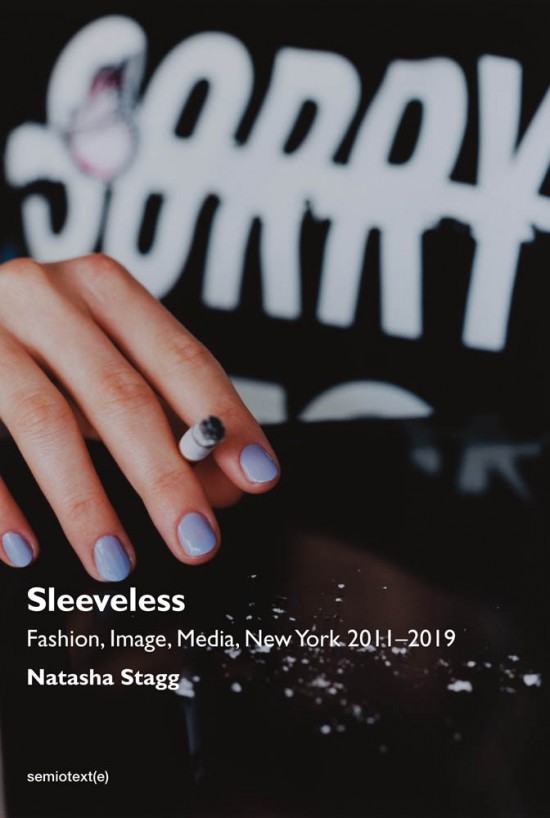