Don’t be fooled by Postsecret’s massive following, viral Facebook posts about suicide hotlines, and semicolon tattoos. It may be more socially acceptable than ever to say you’re taking psychotropic medications, but the high incidence of mental illness notwithstanding, the inner lives of the quote-unquote mentally ill remain a topic of fear, and are still susceptible to caricature. If I say “mentally ill,” you might picture someone you’ve seen near your local bus stop, yelling. Only certain disorders, like depression, are now more socially acceptable. Schizophrenia is not among these. As Esmé Weijun Wang writes: “According to stereotype, schizophrenics are seen as some of the most dysfunctional members of society: We are homeless, we are inscrutable, and we are murderers.”

Schizophrenia is at the center of Sandra Allen’s book. This “true story about schizophrenia” comes to the author by way of her uncle Bob, who mailed her a manuscript of his autobiography when she was a student at the University of Iowa. That manuscript, which forms the bulk of the book, is interspersed with and bookended by Allen’s writing in her own narrative voice about her relationship with her uncle, her conversations with other family members and Bob’s friends, and, at the end, the process of finishing the book.

Allen opens the book with her uncle’s phone call, which she received shortly after starting a graduate program in creative writing. What Bob calls her to say is, “Hey, I wrote a book, man. I wrote the story of my life.” His book begins:

“this is a true story of a boy brought up in berkeley california durring the sixties and seventies who was unable to identify with reality and there for labeled as a psychotic paranoid schizophrenic for the rest of his life;”

“I didn’t know my uncle well,” Allen writes. Her descriptions of her uncle and his home, which she visited as a young adult on a road trip with friends, not only convey the distance of their relationship, but also paint a distasteful image of the man. He emerges as a sickly curiosity in sickly surroundings: “The walls were as yellow as his teeth. A television was talking loudly to itself.” Allen writes that she often thinks of Bob “sitting, smoking, strumming, and singing along with the loons.” (This detail may be true to life — but loons.) These choices establish Allen’s narrator as someone who, perhaps like many of the book’s readers, see the outlines of Bob’s eccentricities but can’t yet make out what’s inside of him.

At the end of that visit and the first chapter, Allen writes, “Countless times since, I’ve thought about how content I would have been to remain knowing only that much about my uncle.” And when Allen reads her uncle’s manuscript, she almost rebels against it: “Perhaps the story was a delusion. Perhaps it was a lie.” Yet she cannot put it away. When she addresses the question of why, she admits to bafflement:

Many people have asked me why I did this. Why did I choose to write about Bob? What interested me so much about his story? I’ve never had good answers to these questions. Bob, in his manuscript, described long days out on Lake L’Homme Dieu in the summers fishing. Perhaps it’s as simple as Bob as a talented fisherman and I’m the guppy he caught on his line.

Allen doesn’t quite explain what ensnared her, but it’s clear that she was compelled to stay with it. “One way to think of what’s happened since,” she writes, “is I have never stopped reading it.” And do we really need an explanation? How many of us reread or revisit, with something other than enthusiasm, family stories that we’re given in one form or another?

But Allen doesn’t just reread, she reconfigures. Indeed, she “translates” or “covers” (her metaphors) Bob’s manuscript into the third person, and into prose presumably more fluid than the original. Where she leaves Bob’s words verbatim, they’re still in his first-person narration, seemingly unedited — unconventional spelling, capitalization, and all. For example:

For weeks, maybe, he remained like this, SMELLING MY OWN SICKNESS and watching THE STREET OUTSIDE ENDLESSLY THROUGH THE CAGED WINDOW:

Late one stormy night through bullets of rain, he saw a figure and two large dogs on leashes, German shepherds like police have, walking slowly down the street. The figure turned and walked back. It repeated this for hours. Bob wondered what it was all about.

That was until he fell into ACOMA.

Yet by putting a spotlight on select original phrases which Allen could not imagine improving, or whose essential “Bob-ness” she did not want to sacrifice, Allen maintains her narrative authority even as she presents Bob’s own words exactly as he wrote them.

When I began reading the first of these sections “translated” from Bob’s manuscript, I felt skeptical and uncomfortable. My misgivings revolved around the ethics of representing the life of another person, a vulnerable one. The centrality of Bob’s own writing to this project did not resolve this question for me, and this nagging discomfort accompanied me for much of the book. Though Bob had sent his manuscript to Allen, she herself didn’t understand what exactly he wanted: “‘Thank you, Sandy, thanks, man.’ It was unclear what he was thanking me for or what he was asking me to do.” Was her decision to publish an edited, framed version of it the right one?

Compounding my discomfort was the sense that Bob’s personal story was being presented as universal, representative of a whole class of individuals. Are we meant to read Bob as an emblematic schizophrenic person? Or perhaps as symbol of the ’60s and, in particular, a privileged white ’60s? Allen writes:

Many times I have contemplated how my uncle’s story might have been different had he not been privileged to be white, or had he not come from a family able to afford private care and so much else.

There is so much tense space between Bob and Allen, Bob and his family at large, the experience of schizophrenia in general and in particular — and yet, in the end, I found these tensions productive and deeply affecting.

One theme of Allen’s sections is the attempt to establish whether Bob’s writings are “true,” whether they can be corroborated factually. She concludes that, as far as timeline and events are concerned, most of them can be corroborated. But there are many aspects of Bob’s experience that can’t be — that are by their very nature private and inexplicable. He writes, via Allen, about losing several days with no memory of what happened: “How strange: one minute you’re sitting in your room watching the world out your bedroom window, and next, this.” If Bob himself is unable to explain what “really” happened, who can? Allen records a conversation with Gene, Bob’s dad: “‘I never thought in terms of fault,’ he said. ‘I thought in terms of tragedy.’” Where Gene sees tragedy, Bob finds a measure of peace. Here is how he closes his manuscript: “I HAVE NEVER BEEN MARRIED, NEVER HAD KID AND DON’T WANT ANY: THE WORLD IS NUTS AND RIGHT NOW THATS FINE WITH ME:”

Ultimately, what feels like voyeurism gives way to a deeper understanding of what the book is about, and of how it accomplishes its goals. The book’s style evokes what it’s like to try to make sense of a troubled loved one from afar, through the haze of hush-hush social and family pressure on the one hand and the unreliability of the person’s own account on the other: What am I looking at here? Who is this person?

If the value of literature hinges on its potential to spark empathy and nurture critical thinking, there’s something to be said for turning a literary eye to characters who test the extent of readers’ empathy and illuminate the limitations of critical thinking. Ultimately, no amount of analysis can resolve the disparity between Bob’s experiences and perceptions and those of others within or outside of his family. And if Mirraculas Paradise builds empathy for those with diagnoses like Bob’s, it’s not by getting inside his head, but by painting the picture of a distinct but impenetrable life. This true story of schizophrenia is not only about unusual or extreme thoughts or behaviors — it’s about whether we take loved ones’ calls or not, whether we have the money to place them in treatment centers (some of which are nicer than others), and whether we are able to take their accounts at face value.

Allen’s book isn’t really about the diagnosis of schizophrenia. Rather, it’s about schizophrenia as a personal and social experience — repeated hospitalizations, confused relatives, expertly avoidant conversations, shared family mysteries and pain. As for Bob, he might not speak for all those who are diagnosed with schizophrenia, but, through Allen, he speaks for himself. 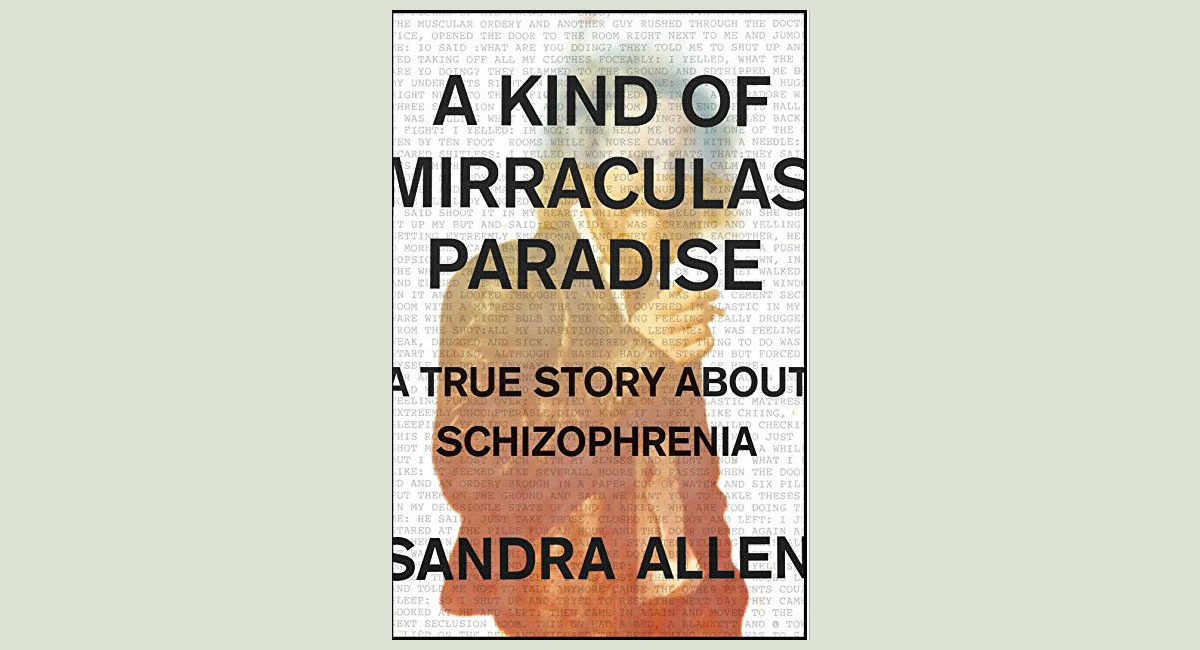