Due to the COVID-19 crisis, Frieze Art Fair held its first virtual exhibit from May 8 through 15, 2020. Following is a sampling of international female artists from among the works on display. Born in Nigeria, Ruth Ige moved to New Zealand and decided to stay. Now based in Tāmaki Makaurau, she paints abstract portraits of androgynous black figures in flowing, luminous robes, evocative of a traditional, elemental culture.

“Using secrecy and mystery as a form of empowerment in the portrayal of blackness,” she says, “I want to create narratives of blackness that are enigmatic and not expected.” Her influences include African-American artists Jacob Lawrence, Kerry James Marshall, and Charles White. She feels White “portrays people of colour with such dignity, grandness and sensitivity,” a compliment that could well be paid Ige’s own work. Immersing herself in the work of these artists gives her a sense of deep belonging.

Ige is inspired by abstraction’s ability to hide and create mystery, “a form of veiling,” she says. In discussing her influences, she says that the work of black artists, their contribution to the history of art, has often been hidden. Her subjects are themselves obscured; with no features, they remain enigmatic, just beyond reach, the lyrical sway of their silhouettes concealed by flowing robes.

Her palette is uniform with slight variations; her blacks are very dark, subtly ranging from ebony to onyx, coal to obsidian. Abstracted figures are painted in a dreamy, quiet collection of powder blues, French greys and paper whites, in varying tones of opacity. The occasional translucent indigo or ivory seems to emit or reflect light of unknown origin.

Her work is infused with a sense of intimacy born of silence and stillness. Ige describes her desire for “quietness, a slowing down and focusing in.” Her subjects never reveal themselves, but still allow a glimpse of the unfathomable, veiled world they silently inhabit. Caroline Walker’s childhood art studio was a kitchen cupboard where she routinely drew portraits of women. After her mother took her to an exhibit of Gainsborough portraits of society ladies in the Scottish National Gallery she began to paint. To this day she makes portraits of women, primarily in scenes of domesticity.

In her twenties, she realized her favorite paintings of women were done by men, and became interested in portraying women from a female perspective. She finds a fascinating complexity in domestic scenes, particularly considering the roles women play. Her subject, she says, “could be the owner, the nanny or the housekeeper for example. The house becomes less about a private space and more about divisions of social class, wealth and the roles that we perform.”

Walker paints from photographs, some of which are shot with posed models in carefully crafted costumes, often inside glamorous, soulless California homes. Others are snapshots taken surreptitiously on her phone of invisible women in service industries, working quietly and unassumingly as hairdressers, manicurists or tailors. In either echelon of society, she hopes to record “the reality of women’s daily lives in the space of the city,” incorporating her emotional response to what she sees into the documentary aspect of her work.

Her influences range from Degas and Manet to film directors like Hitchcock and David Lynch. Her interest in the representation of women in Western art has widened to include “reality TV, trashy magazines, and popular culture, which present different ways of imaging women, often where women are choosing to present themselves in particular ways.”

Realism is important to her. She hopes the viewer will feel connected to “a real space occupied by real people.” But her painting is also loose and abstract, often conveying a sense of emptiness or listlessness, a feeling of being vaguely trapped in a domestic setting or place of work. A pervasive sense of loneliness runs through her work.

There is a voyeuristic, cinematic sense that we are watching these women while nothing happens to them. Their private lives are opened to us, giving an impression of stasis and monotony intertwined with comfort, familiarity, focus, discipline, or mild ennui. These are women comfortable at home, or in their own spheres. In a way we are wrong to intrude, or would be if they noticed us. But in another way, we are wrong to ignore them, the women doing invisible work on which the world quietly runs.

This series “really opened my eyes to the idea of invisibility, of those overlooked lives in the city around us,” she says. “This led to me becoming interested in women working in… professions dominated by a female labour force, but which are largely taken for granted or, in the case of hotel housekeeping, designed to be unseen.” Her portraits of these women underscore their value. They deserve to be seen. And to be seen with such subtlety, empathy, and tenderness as her paintings lend. Maureen Gallace is drawn to lonely, tranquil homes and empty beaches in “Connecticut and Massachusetts,” she says, “places I know about from my childhood. Some of those places I have been returning to for decades.”

She presents a scene utterly familiar (a beach house, an ocean wave) while remaining at a cool level of remove. Seeing her work feels like returning to a place you know, as if under glass, or just out of reach. Her poise and subtlety, her deep interiority, keep us from getting too close. A dreamy vulnerability is protected by mastery of technique, the gloss of overflowing beauty, and deceptive simplicity. A first glance flatness makes you feel you’ve seen it, it’s time to move on, just as you hesitate, wanting to linger and be drawn further into this familiar/mysterious, placid coastal scene.

Gallace hinted at a reason for her endless repetition of the same few subjects, or perhaps a reason subject matter itself is secondary to a painter’s pursuit, when she said, “It is more about each individual work embodying a sustained effort, in total – refining and articulating painting as a language in and of itself… I am always trying to refine, which could mean both making things tighter or looser. So that is the simplest way to describe this current show… paintings in search of refinement.”

Her small paintings share a pale, muted palette. Made from snapshots, drawings and memories, they feel like catching your first glimpse of something, which is possibly linked to the immediacy of her process. “Once I start the painting, there is a very small window of time to complete it,” she says, “If it doesn’t work, it gets wiped out and I start over… This process can take several weeks or could be instantaneous. It’s a bit of a high-wire act.”

Gallace mentions Fairfield Porter, Jane Frielicher and Morandi as influences. Others draw parallels with Elizabeth Bishop, Alex Katz, and Bonnard. Her hushed intimacy conjures the quiet, reflective simplicity of the Nabis. Considering her paintings, Peter Schjeldahl wrote that Porter “liked to argue that modernism went astray by hewing to Cézanne rather than to Vuillard.”

But Gallace finds resonance with Cézanne as well, saying, “I think he was trying to put everything that he knew about painting into each object. It’s hard, but I think it’s a real thing that some painters have: the need to distill things down, to get at the essence of what painting is.” 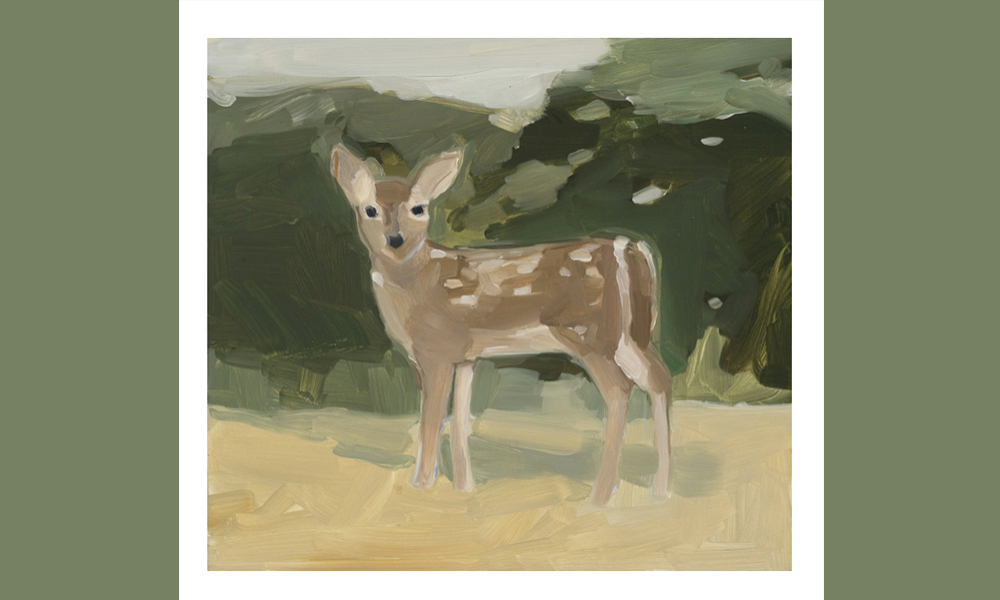