I used to be wildly, irrationally, embarrassingly jealous of Amy Santiago. Jake Peralta would be much better off with me, someone who wouldn’t give him a hard time about his shitty second hand mattress or the trash in his desk drawer (because I have those too) or his less-than-fancy neighborhood (because I live there too). And I hadn’t met many characters who seem like they’d be a better time than Jake. Which is part of why it was so hard to begin to unhook myself from Brooklyn Nine-Nine, which was picked up by NBC last month after Fox announced it wouldn’t be renewing the show for a sixth season.

The public disappointment on hearing the news that the show, which often challenged stereotypes and gave us the feel-good conversations and relationships we yearned for, had been canceled (right after the same station renewed a show where the main character recently spent a whole episode wondering whether her Muslim neighbors were making a bomb) was understandable and predictable. I expected to feel the same way, but instead, very strangely, I felt something like relief.

The level of fondness I’ve been feeling for a group of fictional NYPD officers has been making me uncomfortable. The almost-end of Brooklyn Nine-Nine feels like an appropriate moment to reconsider the role cop shows play in our lives, especially now — and also to remember just how pervasive they are in our culture. It’s also important to rethink the “pride” or trust or expectations in our police force that these shows might be inculcating (or reinforcing) in us. Cop shows have long worked towards influencing public opinion about the police, especially in cities where this relationship is fraught. These shows have resulted in a very skewed impression of what the police department actually does, how their days are spent, and most importantly how effective they are. A study published in the journal Criminal Justice and Behavior found that in SVU, The Mentalist, NCIS, and Criminal Minds, the police solved 85 to 100 percent of their cases. The NYPD’s clearance rate since last year is about 30 percent.

The study suggested that part of the reason cops’ work is seen as so sympathetic in popular television is that their lives are often portrayed as extremely busy and exciting. This is far from reality as well; the description of police work as “99 percent boring and one percent sheer terror” has become something of an adage. That paperwork that Jake is always refusing to do is actually what occupies most of a police officer’s hours.

These shows also portray police brutality as a response, almost solely, to provocation or threat by suspects. Their violence never comes off as unjustified. Police in crime dramas also routinely threaten, blackmail, and lie to suspects, but only ever for very strong, consciously-scripted reasons. These are dangerous inaccuracies that allow viewers an uncomplicated view of their protagonists. But even in real life, this is legal, some might argue. And they’d be right — most of the crimes that the NYPD commits are all legal, including physical abuse and murder. Legality doesn’t necessitate morality.

In real life, just across the park from where Jake and his squad put away the bad guys and charm us to no end, young activists are calling for police abolition; they’re suing the NYPD for the level of militarization they display at public events; they’re creating rapid response networks with their communities so that no one will ever have to call the police for anything. A short subway ride from the 9-9, members of the Strategic Response Group — a heavily-armed anti-terrorist outfit — patrol Crown Heights and East Flatbush, doing policing as minor as handing out traffic tickets. The SRG has no business being in communities, doing the work of local police officers; it’s murdered local residents before. The public opinion that cop shows work towards creating is exactly what these activists have to fight against when they rebuild their communities after police brutalities.

The right to create fiction is a sacred one, and it’s silly to expect police shows on popular television to mimic everything that their audience or newspapers say. Brooklyn Nine-Nine’s characters are very good company for a night in bed with pizza after a terrible day; they give us lots of laughs and lots of respite from the real world. But the real world of Brooklyn seems like an inappropriate one to forget or deliberately set aside, even if it is just for the 30 minutes that we watch the show. What does one make of fiction that turns an institution that killed 100 people in one month in 2016, into a group of cuddly, woke, racially-diverse sweethearts?

Something strange happens when the name of a place becomes a familiar name in pop culture, suddenly uttered more frequently across entirely removed contexts. Places float out of the physical world for a time, and the idea of them is hijacked by fabulists. “Brooklyn” is a fun word to say, a fun place to talk about, to create a world in, to easily characterize. So are “Bushwick” and “Crown Heights,” both neighborhoods and film titles. Indulging in this strange process of extracting a place from itself, and maybe sometimes even dehumanizing it, even if it’s only by watching an unrealistic film or TV show, is made uncomfortable when the place and its people face threats to their lives and livelihood that aren’t addressed.

There’s no doubt that Brooklyn Nine-Nine is one of the most harmless shows we have as far as cop shows go. It’s addressed some important issues of the cultural moment, and in simplistic terms the characters do a good job of keeping up with progressive conversations. But a lot of this progressiveness is the bare minimum that we should expect from the culture we consume. It’s certainly easier to throw racial diversity into a cast of cops than to really address the fact that the police force is a legacy of slave patrol, or the violence it inflicts on racial minorities in this country.

Brooklyn Nine-Nine straddles progressiveness and totally out-of-date-ness, through both its immediately recognizable conversations as well as its active avoidance of other conversations. There’s no need for their characters to agonize over what inappropriate workplace misconduct or consent really means — we know what’s acceptable and what isn’t. On the other hand, it’s okay for Jake and Amy to race to lock up low-level offenders based on a bet they have with each other, and we’re expected to assume that this problematic motivation does not lead to any wrongful convictions. But a different kind of pressure on cops in real life has done just that — broken windows policing in Brooklyn has led to the police having, outrageously, arrest quotas that they fulfill at the expense of residents in poor neighborhoods.

In a much-exalted episode last season, Brooklyn Nine-Nine addressed racial profiling, where Sergeant Terry Jeffers is subject to a random stop and frisk by a white cop in his own neighborhood, and then convinces his Captain to submit a complaint. The spirit of it is a little misleading (as the Black Panthers asserted repeatedly, a more diverse police force does not equate to a less discriminatory one, because it is not white cops who are the problem but the institution of the police force, which is a white institution; I have met several activists who have been assaulted by cops of color who sneer at the Black Lives Matter movement). And closer look at the conversations in that episode also gives us members of the squad being a little bit too confused by Terry’s significantly telling them: “I got stopped by a cop for walking.” Rosa, another woman of color, insists innocently that that doesn’t make sense before realizing, in what seems like a too-scripted way, “Oh, wait…I see what happened,” (not something we would expect someone in Brooklyn to say in a conversation in 2017), and Jake expresses not-exactly-cute bafflement that he himself has never been stopped by a cop doing “way more suspicious things” than being black. Yes, Jake, that is exactly the point.

The point is that the woke conversations that were happening on Brooklyn Nine-Nine in 2017 were still years behind us; if we’re going to value a TV show for being current and relatable, we should also expect it to be less forced. Brooklyn Nine-Nine is in many ways more beautiful and enjoyable when it isn’t actually trying so very hard to be “the good guys,” even though that is exactly what the NYPD, fictional and real alike, believe with all their hearts that they are.

None of this is to say that to stop watching Brooklyn Nine-Nine, a warm collection of stories about some of the most lovable characters currently on television, directly solves any of our very real problems about police violence. We all need and deserve respite from the rarely-inspiring news cycle in the form of entertainment, and there are far worse things to complain about than this recently rescued department with the cutest detective ever.

But nothing about what makes us love them really needs them to be police officers. I never really watched Brooklyn Nine-Nine for the endearing Encyclopedia Brown-like way they do their police work; I watched it because the squad is funny, because their friendships are nuanced and heartwarming, because of literally everything Gina says. These characters could probably have been anyone, representing any industry. And it’s easy to believe that if I or a lot of the girls I know who have a crush on Jake Peralta met a real life version of him, they’d be a little more skeptical of him as an NYPD officer than they are of his character. But, as co-creator Dan Goor said, “A police station was a shortcut in some ways…you know instantly who the good guys are and who the bad guys are.” Viewers deserve more nuance than this “shortcut,” and especially considering how misleading it so often is.

Maybe there is something to say for the vigilance and critical eye with which we should read woke culture that is produced by massive industries for our consumption. I had already started trying to decouple from Brooklyn Nine-Nine (along with all the other cop shows I lovingly grew up with) by the time its cancelation was announced, and I will continue to even though it’s been picked up again. It belongs to a huge category of TV shows that help build a public opinion that many activists are struggling to undo so that they can do their work — in this context, I can’t help but think that one less cop show might not have been the worst thing for us right now. 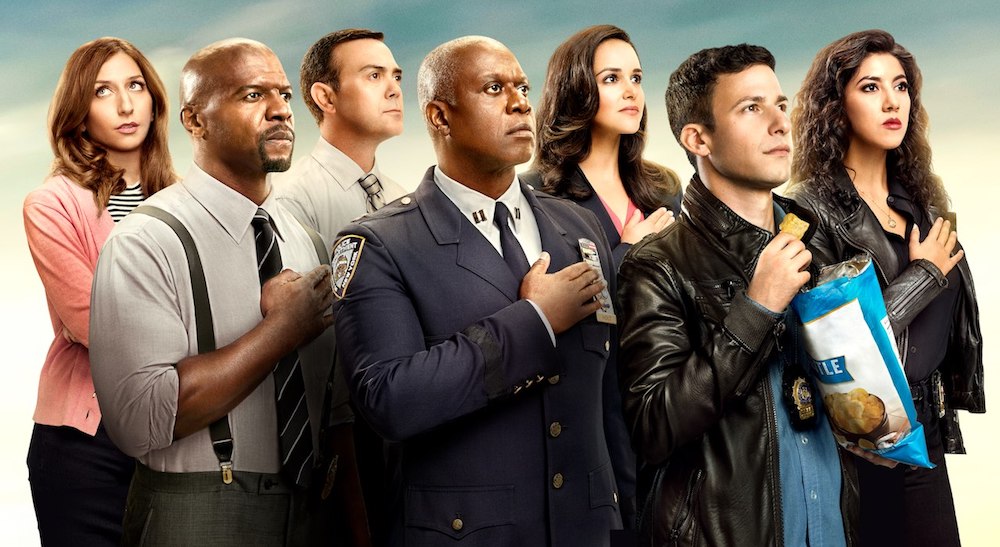