Last year’s best coming-of-age film, the deftly shot and subtly scripted Columbus, was released to little fanfare last fall despite near-universal critical acclaim. The film sidesteps well-trodden plot devices and suggestive music to instead offer a window that gently, steadily opens onto the inner lives of its characters.

Columbus is the debut feature of writer and director Kogonada, previously known for his video essays centered on other filmmakers’ visual and thematic motifs, like “Linklater // On Cinema and Time,” “Mirrors of Bergman,” and “Ozu // Passageways.” In Columbus, Kogonada makes good use of his studies in film, delicately balancing a story of new friendships and old wounds with breathtaking visuals and philosophical reflection.

Though press coverage and award nominations lauded Greta Gerwig’s Lady Bird as the year’s most original coming-of-age film, Columbus captures an even more distinctive and unworn experience of teenage life. Like Lady Bird, Columbus tells the story of a girl approaching adulthood while dealing with a difficult mother. But while Lady Bird (Saoirse Ronan) and most characters coming of age try desperately to escape their families, their houses, and their hometowns, 19-year-old Casey (Haley Lu Richardson) is insistent about remaining with her mother (Michelle Forbes) in Columbus, Indiana. “I like Columbus… I do,” she tells a childhood friend who asks when Casey will move somewhere, anywhere else. “I love it,” she tells a family friend about her mundane job at the public library.

This begs the question: why doesn’t Casey, who is intelligent, curious, and capable, long to escape like her contemporaries? Columbus is a sleepy town, especially as represented in the film’s quiet soundscape, scored by Hammock, and its carefully framed shots in which the camera almost never moves. Casey’s most important reason for staying is not revealed until later in the film, but the town’s primary asset does happen to be Casey’s primary interest — modernist architecture.

Casey is an amateur expert on the town’s wealth of modernist exemplars and has attended nearly every visiting professor’s lectures about them. She planned to hear a lecture by a professor visiting from Korea, but after he collapses in the film’s opening scene Casey meets the professor’s son Jin instead. Jin (John Cho), a translator living in Seoul, has reluctantly flown in to be with his comatose father. Jin is tense and guarded, but when Casey approaches him across a fence and asks about his father, the two strike up a cautious friendship. The camera moves for the first time in the film as it follows Casey and Jin walking the fence line together.

Throughout their long talks and visits to Casey’s favorite buildings, both characters’ stories begin to unfold. So many dramas hinge on explosive moments or big breakdowns — an angry boss swiping everything off his desk onto the floor in a rage, a sad woman shown in close-up telling her most tragic story, a declaration of love shouted up to the beloved’s window — but these things rarely happen in life. In our real lives, even when we are suffering, most of us fight hard to maintain some kind of functioning exterior, to go to work, make dinner for our families, show up at social events. Columbus does not live in the explosive drama, but in this subtle struggle between the exterior and the interior.

Most of the emotional moments in the film are not looked at directly; instead, they are reflected or deflected. Early in the film, Casey begins a tour guide-style rundown of facts about a modernist bank she and Jin are standing outside. Jin asks her to stop, to tell him instead what it was about the building that moved her when she first saw it. She considers this for a moment, and the shot shifts. We then watch through the glass from inside the bank as Casey responds, her answer kept silent. Later in the film, a tense scene between Jin and Eleanor is seen entirely in a mirror. Other scenes are viewed from behind a door, or through a doorway.

The dialogue is never overly expository. The characters deflect like the camera and do not, cannot, linger too long on their own emotions. Finally beginning to open up about her mother’s drug addiction, Casey abruptly cuts off Jin’s questions. “I don’t really want to talk about it. I just wanted you to see this building.”

One night, Casey’s mom does not come home. To dull her anxiety, Casey drags Jin out to look at another building, and he can tell she’s upset. When Casey alludes to meth in their conversation, Jin asks if Casey struggled with an addiction to it. Casey says no, and Jin tries again. “Your mother? Did she do meth?”

Casey repeats the question a few times, laughing at how it sounds out loud, before Jin asks again. “It was really hard for a long time,” she finally answers, barely holding back tears. “We sort of hit bottom before my mom was willing to do anything… I’d rather not talk about it.” She wipes her cheeks and up comes the glass, the mirror, the façade — this time with words instead of camerawork. “I met Deborah Berke last year,” she tells Jin through an effortful smile.

Berke, an architect and professor at Yale, even offered Casey a sort of job opportunity. Jin, in disbelief, asks why Casey did not accept the offer. “I really think I should stay with my mom. She’s doing really well, we’re happy… I just think I should stay here.”

Compare this with the eponymous character in Gerwig’s Lady Bird, who throws herself from her mother’s car during an argument in the film’s opening scene after announcing, “I hate California…I want to go where culture is, like New York.” Their contrasting ambitions may merely be the result of Casey and Lady Bird being different people contending with differently difficult mothers. Casey’s perspective is unexpected, though, while Lady Bird’s outburst is part of a well-worn script.

Columbus is an exercise in restraint and contrast. The movie’s rigid lines make every curve stand out, the places where the inhabitants do not quite fit the boundaries of their world — Casey’s curly hair, the imperfections of a parsnip she peels while making dinner, the red flowers out of focus behind her as she stares at a beautiful building.

The emotional restraint throughout the movie is another kind of boundary-making, with both Casey and Jin working hard, as adults do, to maintain the normalcy of their lives. Against Kogonada’s motionless visual landscape and the gentle score by Hammock, small moments of fighting back tears or reaching out to touch someone loom large. Richardson is particularly excellent at conveying the sense that we are just seeing the surface of something bigger and deeper underneath.

The film is as often beautiful for what it is not as for what it is. At almost every turning point in the plot, it is easy to imagine the path that most other movies would take. Columbus always turns another direction.

The typical female coming-of-age story has a number of key plot points, which Lady Bird hits without fail: one difficult parent and one understanding parent, a rebellion that lands the character in mild trouble, abandonment of a long-time friend in favor of a newer, more popular friend who turns out to be shallow, a cool teacher’s unsolicited wisdom, disappointing sexual misadventures, the realization that home might be just as good a place as anywhere else, and a subsequent profession of love for the protagonist’s old friends, family, and hometown. The heroine ultimately moves forward, but keeps the life she formerly renounced close to her heart.

Columbus overturns all of these conventions, in large part because the narrative is rooted in a very different premise. Casey’s challenge in becoming an adult is not to learn the value of her home and her family, but to learn that it is alright to move on and to do something just for herself. Young women’s arrival to adulthood is often signaled by sexuality or rebellion, but what gives Casey her maturity is her focus and seriousness, earned through years of bearing responsibilities only adults should carry. She has learned to carry them well, finding a sober satisfaction in caregiving as her purpose, but her youth shines through in her yearning — her passionate love of architecture, her dreams of college, and the moments when she cannot hold back tears.

Columbus also sidesteps the thankfully now-passé fantasy of the manic pixie dream girl and the sadly still-very-real fantasy of older men and younger women in which a stiff, usually slightly older man, having lost his enthusiasm for life, meets a young, vivacious woman who changes his perspective on the world and rejuvenates him. When Jin and Casey first meet, our moviegoing radar immediately detects this dynamic as a possibility. But Jin and Casey never become romantically involved and, although Jin is excited by Casey’s excitement about architecture and seems relieved to connect with another human being, there is no major awakening or change of heart for him. It turns out he is also wrapped up — in an even further subversion of the dream-girl trope — in lingering feelings from his youth for an older woman named Eleanor. (Eleanor, played by Parker Posey, is Jin’s father’s assistant.)

Jin’s emotional restraint can sometimes feel overdone. His stiffness makes his flashes of catharsis more jarring, emerging less gradually than Casey’s. There are moments, too, when his questions seem designed solely to give us insight into Casey’s psyche. In a storytelling tradition where women often exist primarily to aid a man’s self-discovery, though, this reversal almost comes as a relief.

Neither Casey nor Lady Bird has the neat, cathartic reconciliation with her mother that coming-of-age films have trained us to expect. Lady Bird does end with a confession of love from Lady Bird to her exceptionally critical mother, but her mother does not reply, and there is no confirmation that their relationship is healed. Casey never confronts her mother about her past or present mistakes. In their last scene together, her mother says only that she is so sorry that they never traveled together. A tear pools on the bridge of her mother’s nose as they lie curled up together on Casey’s bed.

A few moments in Columbus offer themselves as a possible thesis. In one, Casey’s coworker at the library, Gabe (Rory Culkin), tells her about an obscure book he’s been reading on contemporary society’s crisis of interest. “The question is,” Gabe says, “are we losing interest in everyday life?”

Later, Jin tries to encourage Casey to pursue architecture, to leave Columbus behind. “You could do a lot better,” he says forcefully.

“Than what?” She shoots back. “Than taking care of my mom?”

The truth is, although Casey does eventually leave when Eleanor offers her a job, coming of age is not as simple as breaking away from one’s family, or falling in love, or choosing one’s career. Coming of age is also about accepting life’s slowness, life’s everydayness, life’s obligations. In Columbus, it’s about making a compromise between vulnerability and distance, between lines and curves, between standing still and moving forward. 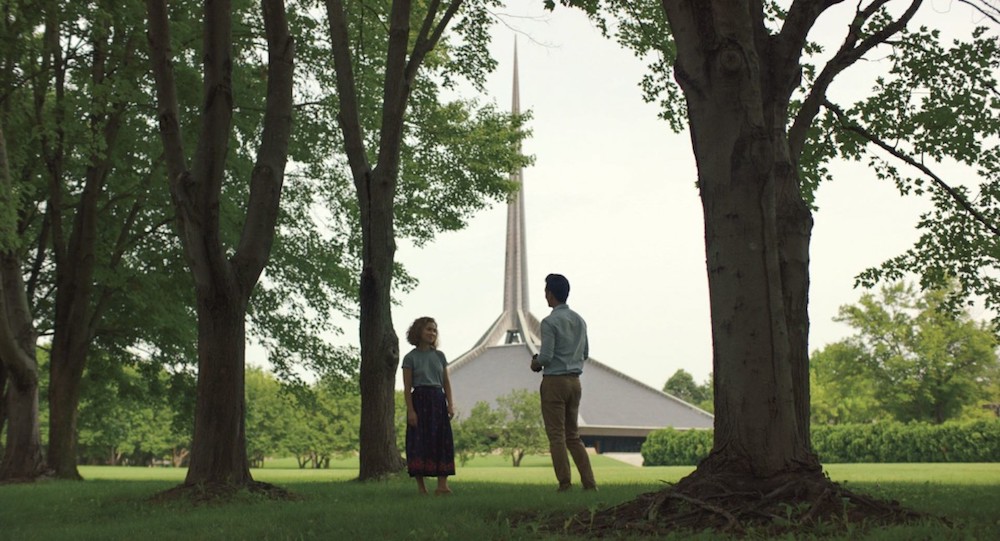