In Things that Happened Before the Earthquake, you won’t find pages-long excursions about the texture of the carpet under the main character Eugenia’s feet, or details on the exact grain of the wood paneling in a Topanga Canyon cabin, or whatever thread a lesser writer might get stuck on her tongue and drag the reader along in her attempts to spit it out. Chiara Barzini’s prose feels like conversation. You also shouldn’t assume from this that the author is one of those social networking denizens who managed to turn her penchant for frank online talk into a book-length manuscript, because that’s even further from the truth. The effect of Barzini’s prose hearkens back to a more open era — maybe the 1990s, the novel’s setting — when books felt more like long exchanges between friends (magically, since the exchange was one-sided), and the reader’s only job was to sit back and empathize. I won’t bludgeon you with my approach or waste your time, the prose implies. You can relax.

Like most teenagers, Eugenia, a native of Rome, struggles to feel at home in the world, and her family’s impeding relocation to imperialist America doesn’t strike her as the path to more inclusion. During a student sit-in at her high school, Alessandro, “the school’s most popular political leader,” orders everyone to the principal’s office. “’Get the girl who’s moving to LA!’ he screamed.” As Alessandro reveals news of the riots surrounding the acquittal of the four Los Angeles police officers associated with the Rodney King beating, Eugenia dreads her parents’ choice of destination even more. How do you go to high school — all of those inherent challenges — in a city on fire?

Once ensconced in the San Fernando Valley, Eugenia finds the world of sunshine, 99 cent stores, and pervasive police helicopters even more alienating than she expected. The fertile Hollywood she saw on TV as a child is nowhere to be found, replaced by the American pasture to which B-list actors are sent out:

Down the street from our house lived Desmond. He was on TV and had a comedy show called Desmond. His wife was a former Miss Virginia. His mother had been a department-store cashier but now lived with him and took care of the house. His sister worked as his personal assistant. We were told he was not as friendly in person as he was on TV and that he carried loaded guns.

If an actor with a TV show named after him can wind up in such a situation, what could this place have in store for Eugenia’s aspiring filmmaker dad? The pot of gold at the end of the rainbow might very well be a Grocery Outlet.

It takes tragically beautiful schoolmate Deva to offer Eugenia ways to escape the collapsing hope of her new home. “[Deva] had a look that said goodbye at the exact moment it was saying hello. I could not turn away from her darting eyes and freckled cheeks. She was hypnotic, like one of those precious stones from a treasure chest in a Walt Disney movie.” As youthful vigor and romance slip away from Eugenia in a city known for consuming both, it’s no surprise she looks too resolutely for these attributes in Deva, who has plenty of her own horrors to deal with.

A trip back to Italy proves Eugenia can’t go home again, either. During her summer spent on a rustic Sicilian island with extended family, Eugenia opts to give the farmer’s wife Rosalia an American-style makeover, attention for which Rosalia is grateful. (“Nobody has ever touched me with the intention of making me beautiful,” she says.) Rosalia’s husband Santino, however, is less than enamored with the change, and he takes out his frustrations in aggressive and horrifying ways. Eugenia is no longer a casual onlooker of the damage caused by American ideals, but one of the instruments of its implementation, a fact that pushes her further into her loneliness.

Fortunately, even life in L.A. has its consolations. Deva’s home with her washed-up musician father in Topanga Canyon offers Eugenia the first glimpses of purity amongst the rot:

I felt the sunlight slash through the clouds and scorch my head. I allowed the savage, hungry nature to beat me and took the beating joyfully. I felt stronger. I could take in unpredictable weather changes without tuning out. I learned to not be afraid of stray coyotes, spiders, snakes, and growling frogs penetrating my sleep and dreams.

Despite the not-always-welcome intrusion of American values on the rest of the world, the means for transcending this place are always at hand, and Barzini reveals Eugenia’s transformation through prose that feels both natural and earned. 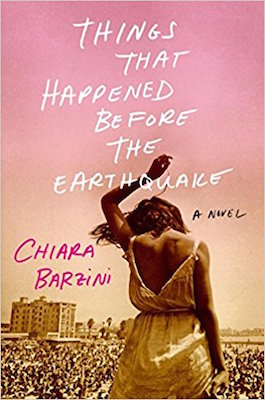