It’s not that Bob Kuttner thinks capitalism is a good thing, exactly. It’s more that he considers it a part of our current reality not likely to go away anytime soon. So for him the task at hand is figuring out how to temper it in the democratic political process — if possible. This he thinks was actually done rather well during a remarkable period of economic growth and equalization starting after the Second World War and lasting until the anti-democratic globalization trend of the 1970s and 1980s brought it to a halt.

His major influence in his understanding of what is to be done is the relatively little known Hungarian economist Karl Polanyi, who he believes “recognized the propensity of capitalism to create calamity but did not believe that outcome to be inevitable.” This he contrasts with capitalism’s more famous critic, Karl Marx, the “great pessimist,” whose “bleak prediction of capitalist self-destruction seemed ludicrous” in the postwar era. Today, however, the views Kuttner elaborates in Can Democracy Survive Global Capitalism? are also decidedly pessimistic.

Although the postwar era was also a focal point of Thomas Piketty’s surprise 2014 best seller, Capital in the Twenty-First Century, Kuttner thinks the French economist got “the statistics right and the politics mostly wrong” when he attributed the period’s reversal of the long run trend toward increased disparity of wealth to the widespread destruction brought about by the two world wars. The US, after all, did not experience devastation comparable to Europe’s, yet did experience the same reversal. What both sides of the Atlantic did have in common, though, were governments committed to making that change happen. Kuttner insists on the importance of the political aspect of “political economy.”

That he abhors the politics of Donald Trump (and his European counterparts) pretty much goes without saying. What concerns him more directly is the question of how the Democrats could manage to lose the White House to the man. The “missing ingredient of Clinton’s campaign,” so far as he is concerned, “was class,” a problem whose roots he traces to the last two Democratic administrations, when “senior economic officials who advised Clinton and Obama to embrace deregulation and austerity … went back and forth between government and seven- or eight-figure jobs on Wall Street. Even if this revolving door broke no laws,” he writes, “it was corrupt in a deeper sense. It ensured that center-left governments would share the outlook of the financial elite at the expense of ordinary people” who would come to understand that whether they voted for “Clinton, Bush, or Obama, or Trump, they somehow got Goldman Sachs.”

He also thinks that where Obama spoke of bridging differences, Clinton highlighted them, “evidently in the hope that this strategy would energize each separate element of the coalition,”  rather than addressing their “common interests as Americans.” Noting that on the final day of the 2016 Democratic National Convention, “there were twenty-five podium speakers in a row, each chosen to represent some presumably oppressed group, but none of them was a straight white male,” he assumes this group was mostly ignored because they are considered “privileged, on average, relative to blacks or women, but that misses the political point. Non-elite white men are getting economically clobbered. There is plenty of privilege in the economy, but it mainly resides in the top few percent — whose extreme privileges were not much part of the 2016 debate once Bernie Sanders was eliminated.”

But the US isn’t the only place where advocacy of working class interests has grown rarer; Kuttner cites Germany’s former Social Democratic Premier Gerhardt Schröder and especially former United Kingdom Labour Party Prime Minister Tony Blair for similarly abandoning the European working class with their “Third Way” policies proffered as an alternative to both capitalism and socialism. Kuttner explains that the traditional understanding of “Third Way” was an alternative to capitalism and Soviet-Bloc communism, largely associated with parties of the Scandinavian left, incorporating policies like Sweden’s financial support and retraining for displaced workers and its labor movement’s industry-wide — rather than company by company — solidarity wage bargaining. Where these policies still exist they retain popularity, to the point where, as Kuttner notes, the anti-immigration Danish People’s Party have claimed to be stronger supporters of these “welfare state” programs than the Social Democrats whose past governments created them — supporters, that is, so long as the beneficiaries are Danes — a scenario playing out in Sweden as well.

The big story on the European front, though, is the failure of the European Union — whose “democracy deficit” has long been cited by internal critics — to develop as the social democratic alternative many assumed it would be, instead opting to “replicate the worst aspects of a global system captive to the demands of speculative private capital,” as Kuttner sees it. This book, by the way, is no superficial journalistic gloss with the story in the first chapter, reiteration in the middle, and recommendations in the last. It’s crammed with information and is worth reading for Kuttner’s take on European politics alone. The continent’s fiscally conservative economic response to the Greek debt crisis, he pointedly reminds us, was largely driven by the politics of the Christian Democratic/Social Democratic governments of Germany, a nation famous for its postwar “Economic Miracle” — achieved after its entire post-World War II debt was forgiven.

We might have expected this book to express greater enthusiasm for the support the Sanders campaign drew, particularly among young voters, in articulating an alternative to permanent Goldman Sachs government. But throughout, Kuttner displays a certain wariness — for instance gingerly quoting sociologist Christopher Jencks’s description of “the political control over the economic institutions” that “other countries call socialism” — that we might almost see as generational, one shared by many older voters who fundamentally agreed with Sanders but feared that the “S word” just wouldn’t fly in American politics, even as they could see that the Great Fear of it had not carried over to the younger electorate. It’s not that we have any doubt how Kuttner cast his presidential primary vote and it’s not that he fears the idea, or even shies away from it — he was a regular and welcome speaker at Democratic Socialist of America meetings when I lived in Boston twenty-five years ago — he just appears to think that change on that order is not within the realm of possibility.

At a time when the global environmental crisis seems to obviously cry out for global solutions, Kuttner fears that “True global government … is utopian or worse” and that “The world is too diverse and complex, and any government that somehow emerged would likely be even further removed from democratic checks, rather as the EU has become.” But the fact that it may be difficult to imagine how we dig ourselves out of the worldwide ditch we are currently digging ourselves into does not make the need to do so go away. Similarly, he has relatively little to say about a futile foreign policy that diverts enormous resources from solving the array of problems that he describes so well. But he is certainly right in thinking that even the more limited goal he thinks is realistic — “A democratic left that both harnesses capitalism and strengthens democracy” — is well beyond anything that has come out of the White House in many years. 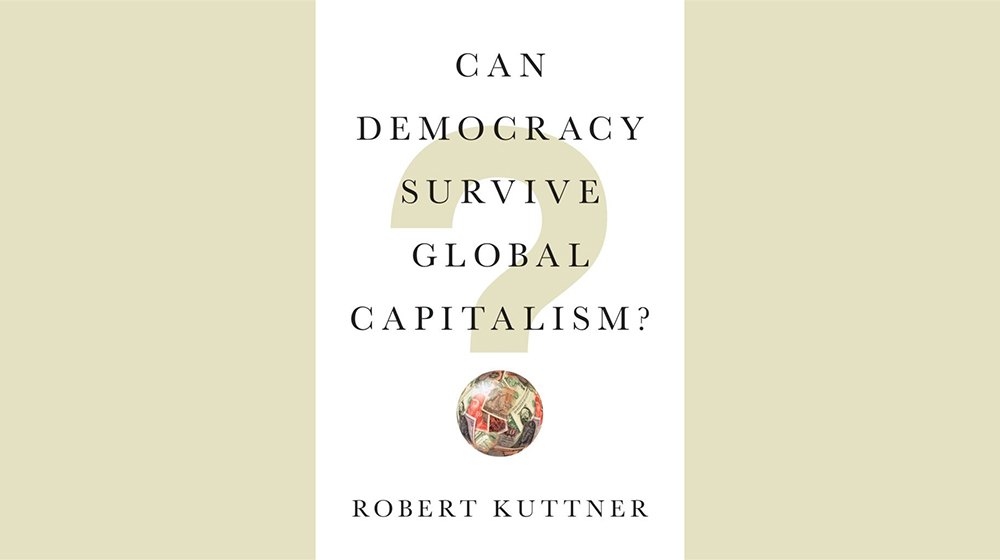