How to begin again? Such was the question that animated the conversations of national political figures in the aftermath of the Civil War. It was the question on the minds of many, if not all, Americans of the time. Historian Eric Foner, the most prolific and influential living historian of Reconstruction, argues in his concise recent book, The Second Founding: How the Civil War and Reconstruction Remade the Constitution (2019), that congressional Republicans attempted to reconstitute America through the passage of the 13th, 14th, and 15th Amendments. Where and how the newly reunified country went wrong—and what to do about that legacy — is the subject of Foner’s magisterial The Second Founding.

Foner’s newest book is a call to remember. He places the experiences of African Americans front and center, and demonstrates how their centuries-long struggle for freedom, equality, and the suffrage has been an engine for originating and securing rights of all peoples within the United States. Foner writes,

During Reconstruction the United States made its first attempt, flawed but truly remarkable for its time, to build an egalitarian society on the ashes of slavery. Some of the problems of those years haunt American society today — vast inequalities of wealth and power, terrorist violence, aggressive racism. But perhaps the era’s most tangible legacies are the Thirteenth, Fourteenth, and Fifteenth Amendments to the Constitution.

This point is one of the signal contributions of The Second Founding. Foner, professor emeritus at Columbia University, has elaborated on the legacies of Reconstruction in some of his longer works, but here he concisely asserts that Americans can alter the course of history, even in the face of tremendous obstacles. This reminder has deep resonance in today’s hyper-polarized public sphere. Foner’s optimistic rendering of what the future could hold may well motivate Americans to look anew at Reconstruction “as a historical process without a fixed end point.”

Proceeding from the background and historiography, Foner alights, as he has so often before, on a consideration of President Abraham Lincoln. Toward the end of the war, but with it and the presidential election very much up for grabs, Lincoln, Foner writes, sought to ensure that African Americans not only had their emancipation proclaimed, but to have slavery abolished. So begins Foner’s account of how the Reconstruction Amendments came to be.

The Thirteenth Amendment, Foner writes, was “the first amendment in the nation’s history to expand the power of the federal government rather than restraining it.” It abolished slavery except as a condition of punishment. Contemporary Americans may be aware of the criminal exemption, which was given considerable attention in Ava DuVernay’s documentary 13th (2016), but Foner provides the background and inspiration for the amendment’s final wording. Republicans in the Congress actually modeled the amendment’s language on the Northwest Ordinance, of 1787, which itself had borrowed from Thomas Jefferson’s proposed Land Ordinance of 1784. “By the time the Thirteenth Amendment was ratified,” Foner writes, “the coupling of a ban on slavery with a criminal exemption had become so common as almost to qualify as ‘boilerplate’ language… But because of its very familiarity the wording did not undergo necessary scrutiny.” The criminal exemption has had baleful consequences, as Foner, DuVernay, Michelle Alexander, and others have shown. The era of mass incarceration, which has become popularly known as “the new Jim Crow” thanks to Alexander’s scholarship, has its roots in slavery and the Thirteenth Amendment’s criminal exemption loophole. The Thirteenth Amendment “was not a final answer to the problem of freedom,” Foner writes. “It turned out to be one indispensable part of a dynamic process that continued for years and gave birth to the Fourteenth and Fifteenth Amendments, further civil rights legislation, and an unprecedented experiment in the South in interracial democracy.”

The Fourteenth Amendment, which holds the record for being the longest amendment ever added to the Constitution, was central to the Republicans’ Reconstruction policy. It had bold aims. Foner’s synthesis deserves to be quoted in full:

[The Fourteenth Amendment] was meant to solve specific problems arising from the war; establish general principles about the rights of the freed people and of all Americans; create a uniform definition of citizenship, outline a way back into the Union for seceded states; limit the political influence of leading Confederates; contribute to the nation-building process catalyzed by the Civil War; and serve as a political platform that would enable the Republican party to retain its hold on power.

The Fourteenth Amendment is chock-full and, because its many parts were composed from compromises which emerged from months-long, spirited debates, the threads of Foner’s argument presented in this chapter could easily be lost. The cacophony around the 14th Amendment might obscure another historian’s narrative through line, but not Foner’s. His treatment of the Fourteenth Amendment is a dense, well-wrought chapter. Compared to the 13th or 15th amendments, which were met with fanfare (at least by African Americans and their supporters), the Fourteenth barely registered with the public. Nevertheless, “no change in the Constitution since the Bill of Rights has had so profound an impact on American life as the Fourteenth Amendment.”

Depending on one’s political leanings, the 15th Amendment, which nominally secured the suffrage for African American men, was met with either celebration or considerable consternation. The celebrations were warranted, but, as Foner writes, “many Republicans were convinced that federal intervention [in the South] must come to an end.” The 15th Amendment was enshrined in the Constitution, but protections were removed for blacks in the hostile South. Those who had been Confederates or Confederate sympathizers rapidly reorganized under white supremacist doctrines and, over the course of decades, would deny African Americans their constitutional right to vote. They were aided and abetted by politicians who considered Reconstruction to be over and done with. Racism, which most certainly had not ended with the Civil War or Reconstruction, would continue to rear its head. One of its more insidious effects can be witnessed in how justices of the Supreme Court “deliberated with little or no reflection on the actual consequences on their rulings for black Americans.”

Foner may be at his best in his final chapter, “Justice and Jurisprudence.” The chapter title comes from a 600-page book from the late 19th century, probably written by Everett Waring, which was “the first sustained critique by black Americans of Supreme court rulings related to the Reconstruction amendments.” Waring was an influential member of The Brotherhood of Liberty, a black-led organization which emphasized the necessity of using “the courts in the battle for equality.” Foner’s explication of the Brotherhood is an important addition to the historiography of Reconstruction. Foner also excels in limning the backgrounds and blind spots of Supreme Court justices. He marshals a litany of Supreme Court cases to seal the point that the nation’s leading jurists had far too narrow readings of the Reconstruction Amendments.

Foner’s newest work is an urgent reminder that freedom, equality, and issues of representation, so germane to the Reconstruction Amendments, should remain central to our debates about politics and history. The Second Founding is also a reminder of a time, seemingly far removed from our own, when Congress could enact world-historical legislation. African Americans have been central to the efforts toward a more just and democratic United States, but they have been historically underrepresented in political office and the judiciary. One need not wonder what the effects of this are on the present: Foner’s depiction of the Supreme Court of the late 19th and early 20th centuries is reminiscent of our own. As Foner has said in an interview with Goldman Sachs Talks, “A conservative Supreme Court can do great damage to the rights of Americans. It has happened in our past.” Looking to the past often illuminates the present. Few things have been clearer: this country is in dire need of finding itself yet again. 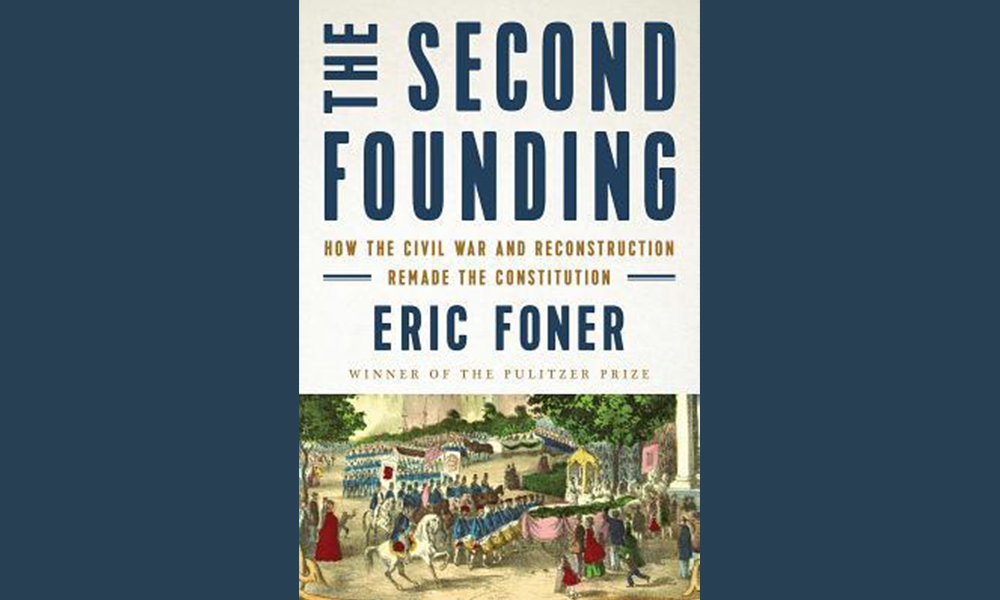