I first read Virginia Valian’s Why So Slow? The Advancement of Women when I was starting my PhD in the early 2000s. I found it fairly depressing. She showed that it could take generations to achieve equity in overall career advancement between the sexes, and that men benefitted professionally from negative schemas (a.k.a. stereotypes) against women. While she succeeded in exposing the previously unexamined differences in career advancement between men and women, Valian concluded that, ultimately, “men tend to be overrated and women underrated” in professional life. It made me wonder whether there was any hope for gender equality during my lifetime, and didn’t make me feel particularly optimistic about my own career in science.

Fast forward eighteen years to the release of Valian’s latest book, The Inclusive Academy, co-authored with Dr. Abigail J. Stewart, which returns to those differences in the careers of men and women in academia. They unpack the structural issues in academia that prevent women and minorities from being evaluated on merit alone and, by consequence, make the academy anything but a meritocracy. They also note that schemas held by university faculty often keep them from identifying these structural issues. But far from merely an indictment of the treatment of women and minorities in academia, this book provides real solutions and concrete actions that can be taken to make academia more welcoming. I found The Inclusive Academy much less disheartening than Valian’s first book: although there remain obstacles to achieving diversity in the academy that can often feel insurmountable, the results of a 17-year pilot study across nine American universities show that diversity and inclusion can be achieved if an institution makes a strong commitment and implements certain key strategies. And my own interviews with over 20 women scientists suggest that the younger, new generation of faculty is more likely to embrace diversity initiatives than those that are more entrenched.

Stewart and Valian draw on an expansive breadth of research from psychology, corporate culture, and government to make their case. They state that if universities are serious about improving knowledge outcomes by increasing diversity, they must invest in more objective and replicable approaches for identifying a candidate pool for faculty positions, hiring and retention processes, and evaluations. At the hiring stage, for example, this requires writing job descriptions that are both broad and accurate, in a manner that makes women and minorities feel that they are qualified for the job. For faculty retention, Stewart and Valian suggest that every new hire “should be provided with conditions that offer a realistic chance of promotion and tenure … [and] should operate within institutional conditions that permit them to be productive and satisfied with their work lives.”

Stewart and Valian’s approach, which includes suggestions for increasing diversity at all career stages, is necessary if we want to maintain and improve universities that are at the cutting edge of knowledge: diversity has been shown to improve research outcomes and foster creativity and innovation — things that universities (at least nominally) prize.

Stewart and Valian have an uphill battle in pursuit of a diverse academy: universities are often heavily socially stratified, and notoriously difficult to change. As a graduate student at an R1 university in 2018 wrote: “both professors and other graduate students tell me they’re afraid of professional judgement by their peers over their personal leanings, and … people openly admit that relationships between faculty, staff, and students are inherently inauthentic.” As Kelly J. Baker writes, unkindness is common in this milieu, and often “viewed as a signifier of intelligence and kindness as a signal of intellectual weakness. Academia rewards those who represent the clever and cruel version of intelligence … nasty behavior gets reinforced. Jerks admire other jerks, and departments and institutions can become havens for assholes.”

Historically white men have benefitted tremendously from the academy as it is. There’s been little incentive for those in power to push for change, which has left many biases (both institutional and personal) intact. The problem is rampant: recently, a senior male researcher at CERN gave a talk saying that “physics was invented and built by men,” and that, these days, “physics is not sexist against women, but against men.”

Women often have to work twice as hard to receive the same recognition as the archetypal white man, their ideas are talked over or appropriated by white men during meetings, and, as Kelly J. Baker writes in Sexism Ed, they’re often expected to do a lot of the “care work” that happens in a university department (birthday cards for the administrative assistant, flowers for the woman who just had a baby, etc.). And heaven help a woman if she displays any competence or ambition — she’ll be seen as unlikeable or a bitch (been there, done that).

In “On Pandering,” Claire Vaye Watkins’s viral 2015 essay in Tin House, she notes that minorities are also targets in academia. “My husband, half Cuban but made much more so on a job interview, is told by a white male scholar specializing in African American literature that his inventing and imagining aspects of Cuba in his novel was ‘problematic’ and that according to this white professor, he got things about Cuba ‘wrong.’”

Rather than seeing Watkins’s husband as a possible collaborator on African American literature, the white male scholar immediately sees him as a threat, someone who must be “put in his place,” a Cuban who needs to be told what he’s gotten wrong about Cuba.

These are some of the many issues that Stewart and Valian aspire to solve. They argue that, while most universities have no idea where to start, they — and the eight other universities who received NSF funding to study this issue — have developed a series of approaches that can be universally applied.

Having worked in a regressive department run by an old boy’s network, with little faculty autonomy over even small things like teaching schedules, I know the type of people who may oppose the institutional changes that Stewart and Valian suggest. Certain faculty are often convinced that, given their education, they know how to accurately assess people, though, as Stewart and Valian note, their approaches are actually largely error-prone. These faculty also often feel that achieving diversity outcomes automatically negates hiring for excellence (i.e., the dreaded “diversity hire”).

At some universities, the status quo may be too entrenched and institutional inertia too strong for things to change. It would be like turning the Titanic: require a lot of advance notice and happen only incrementally over a long time period. Fortunately, at other universities, these problematic faculty represent an increasingly small and isolated number, as they are replaced by new faculty with progressive perspectives on diversity.

Stewart and Valian, for their part, are optimistic that universities will take up the diversity torch and use the resources and guiding principles they’ve outlined in their book. I can see why. During my 18 years in and around academia, discussions of diversity, equity, and inclusion have become more mainstream. And in a climate where we can talk openly about diversity, universities are more likely to implement the concrete strategies outlined by Stewart and Valian, changing the minds of intransigent faculty as they go.

Recently, international communities of scientists have come together to affirm a commitment to diversity, representing a major step forward for science in general. For example, physicists worldwide countered the CERN researcher’s claims (mentioned above) with an open letter that supports the diversity goals outlined by Stewart and Valian, stating that “the humanity of any person, regardless of ascribed identities such as race, ethnicity, gender identity, religion, disability, gender presentation, or sexual identity is not up for debate.” The American Geophysical Union, which represents over 60,000 scientists, created a Diversity and Inclusion Task Force in 2017, and even the Canadian government has published a document on Building a Diverse and Inclusive Public Service. These are hopeful signs.

At individual universities, the impetus for change must come from key champions in upper administration, and they must make clear that they’re invested in diversity as something more than just hiring token women and minorities. They also need to show their commitment to diversity by providing course relief or additional pay for faculty working on tricky diversity issues.

In Valian’s first book, Why So Slow?, she concluded that sociopolitical and socioeconomic changes in the status of women in the workplace would change with successive generations. I suspect the same is true of increasing diversity in universities, particularly those with fewer entrenched faculty members. The new generation sees diversity and inclusion as standard practice; offer that new generation incentives to work towards implementing Stewart and Valian’s recommendations, and I think we may see the change they’re promoting. 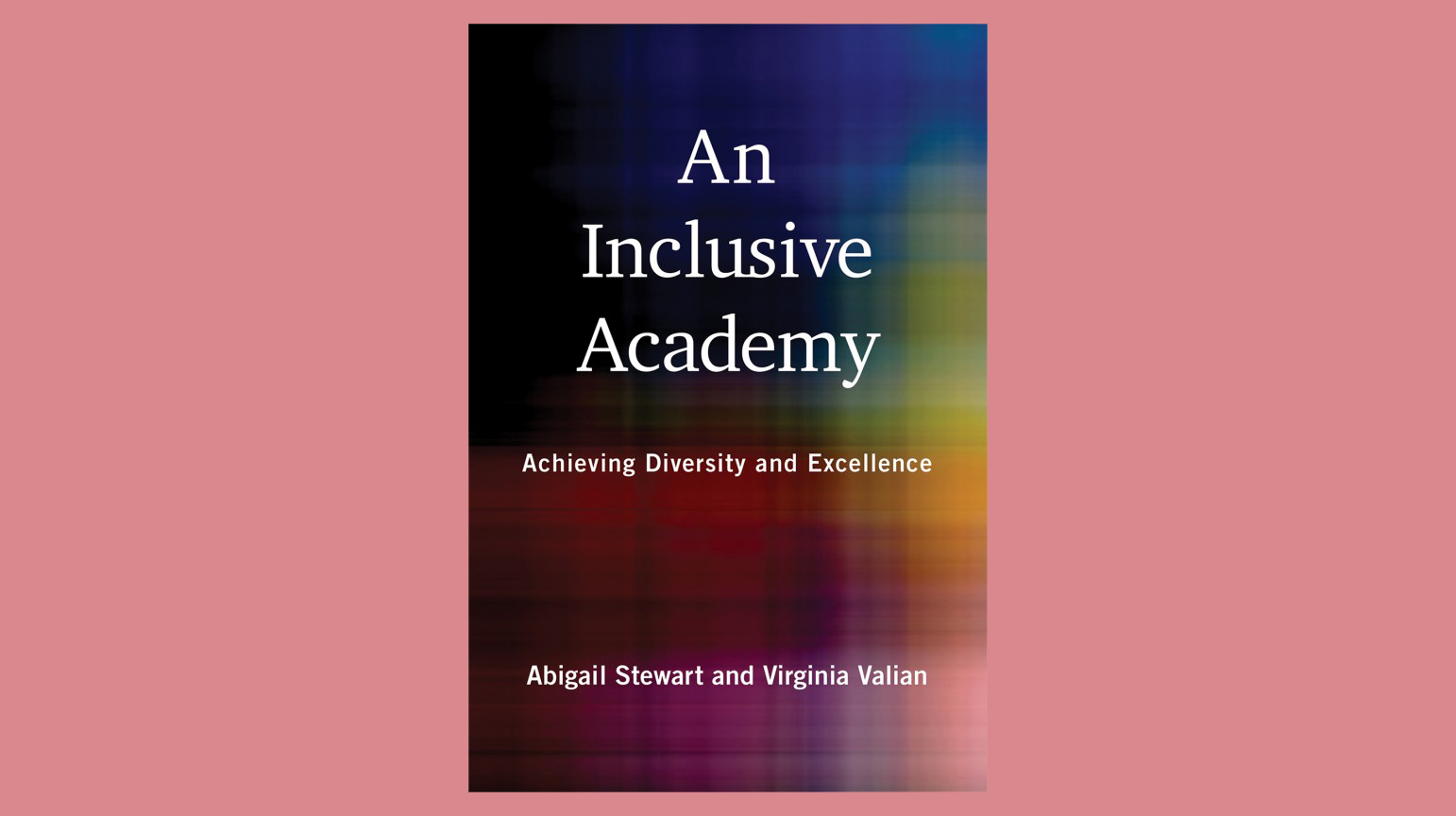