Nature illustrates. It does not lecture. While the strangeness of the world may be tempered by knowledge, nature itself is not accountable to our comprehension of it: it simply is, without explanation. Insofar as there are lessons to be learned from the structure, patterns, flora and fauna of the natural world, they are learned through connoisseurship. The ornithologist confidently answers when asked what kind of bird is that, but the amateur naturalist, sensitive to and sentimental about the bluebird family nesting in the oak outside her kitchen window, may have the advantage when asked — childlike, but not naively — what does a bird mean?

Margaret Renkl is an amateur naturalist, formally schooled in poetry. She is a regular contributor to The New York Times, where she writes about the landscape of the American South with the sort of maternal pride and affection the region has all but lost claim to, mired as it is — as we are (I’m a native Tennessean) — in regressive politics and wounded provinciality. Her debut memoir, Late Migrations: A Natural History of Love and Loss, is a collection of remembrances about her family life in Alabama purled with observations about the rich economy of plant and animal life in her suburban Nashville yard. Each chapter is brief, rarely longer than three pages. Her prose is crisp and efficient, her tone a sustained aria: with every fact, story or perception shared, her tenor is the same — how wonderful the world and strange our place in it. She is, one imagines, a fan of Mary Oliver.

Over the course of hardly 200 pages, Renkl ages half a century: her parents lead their lives, grow old and die; marriages are made; children are born; children grow up; and life trots on as if at a gallop. Meanwhile, within the same span of pages, a rat snake winters beneath Renkl’s porch. Red wrens are troubled by starlings, who are themselves stalked by hawks. Mealworms are fed to bluebirds by human hands, and the moral implications of the food chain are briefly considered. Renkl pays her Nashville yard as much attention as she does the entire span of her own life. The effect is that Renkl herself, her family and all the supporting cast of their lives, seem no more permanent than the migratory birds who alight on the shrub-hung feeder once a year on their journey elsewhere. Human life seems no less natural than the lives of other animals: every creature here is nesting in the same yard.

By keeping her chapters concise no matter the subject — the story of her grandmother being shot by a lunatic stranger is given just shy of a page and a quarter — Renkl mimics the winnowing effect of memory. What does anyone remember from their childhood so distinctly as to deserve a full ten pages? Her reminiscence feel small enough to turn over in your hands yet often weigh heavy with grief. Even her fond, plaintive memories are saturated with the simple loss that attends the passage of time: it’s sad to be so far from one’s happy childhood. But the companions of grief and loss are love and possession. Renkl describes a life of doting fathers, rambling backcountry outings and loving marriages. If sadness saturates Late Migrations it is because Renkl has lived a life worth mourning.

Renkl is a Southerner as thoroughly as she is a naturalist, and Late Migrations is a story of the South. The entire action of the story takes place between Alabama, South Carolina, and Tennessee, save for an ill-fated sojourn north to graduate school in Philadelphia, where Renkl is rattled by the ceaseless roar of traffic, humiliated and irritated by her post-structuralist cohortmates, none of whom, it’s fairly implied, has the good southern sense to call King Lear a tragedy and Susan Sommer workout tapes something less deserving of scholarly attention.

It may be a caricature — the dormouse Southern lady scandalized by the hubbub and incivility of Yankee culture — but Renkl’s duly embarrassed by her inability to thrive outside of her Southern harborage. She is embarrassed but, ultimately, resigned to her fate as an irredeemable Southerner.

What does it mean to be irredeemably Southern? It means that Renkl can structure a chapter around the phrase, “Blessed is the,” use it as anaphora — blessed is the weary mother, blessed is the fatherless father — and not be accused of Hallmark sentimentality. We talk like that down here. It means that Renkl finds herself lounging on a porch more often than that, that family is the anchor and lodestone of her life, that religious or not Jesus is always waiting in the wings. But more than anything, to be a Southerner means to love this land and not another.

However, even in a book as personal as this, it would be myopic to speak of the South without touching on the specter of racism that haunts this region. Renkl does so well, which is to say, without the presumption of knowledge or authority. In Montgomery, 1985, purely by chance, Renkl is pulled into the 26 celebration of the Selma March. She writes, “More than three decades later, I can still exactly recall the smile on one older woman’s face as she reached out to grab my sleeve and pull me into the throng of marchers. I can still smell the damp clover in the median. I can still feel my burning cheeks and my thumping heart. But no matter how joyful, how hopeful, I suddenly felt — no matter how desperately I wanted to — they were singing a song I didn’t recognize, and I couldn’t add my voice to theirs. I could not sing along.”

Tight as this collection is, and short as each chapter is, readers are left with only an impression of Renkl’s life, each tiny story suggesting that a hundred others could be told to fill the space between any two. In that way, Late Migrations is something of a Pointillist autobiography. And the book isn’t without a visual element. Collages made by the author’s brother, Billy Renkl, appear alongside certain chapters, illustrating an element — plant or animal — discussed within. Half fairy tale etching, half Joseph Cornell box, the collages are a visual simulacrum of the text — dreamlike, self-consciously old-fashioned, melancholy, lovely.

Cherish the dirt, cherish your father, forgive your mother because the only appropriate attitude to adopt towards life is awe. The world is imperfect, always listing deathward, but is worth inhabiting just the same. The fragility of life, human and otherwise, as evidenced by Renkl’s accumulation of losses — parents, grandparents — by the dwindling population of monarch butterflies that no amount of zinnias freshly planted about one’s yard can begin to rectify, cannot overwhelm the heavy joy of living nor snuff out the hope that through careful attendance to the commonplace majesty of life, living itself might be rightly exalted. 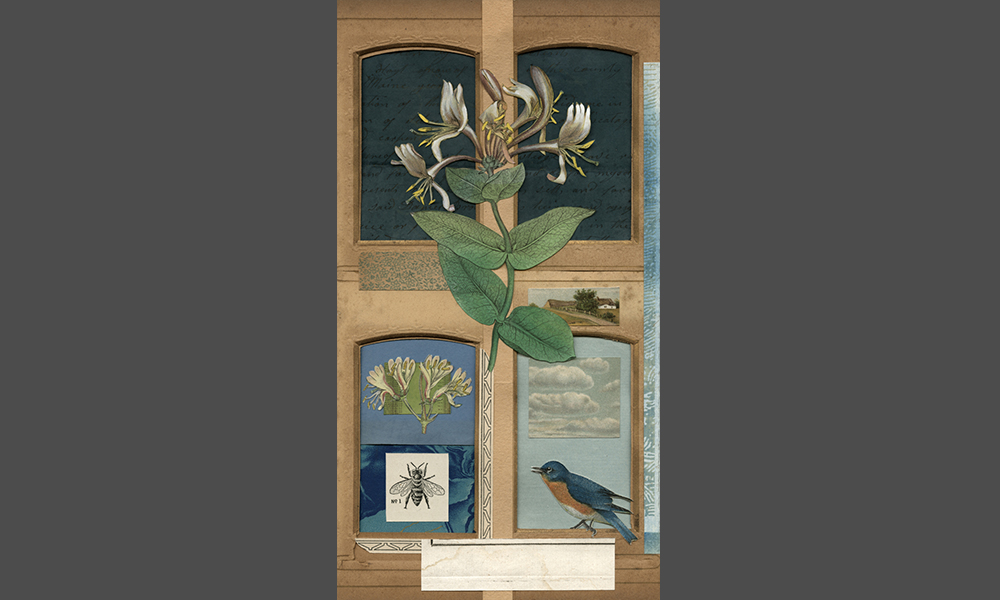