What is the charge of poetry? It can inform, but less precisely than an article or essay. Diaries are a better source of secrets. Poetry can help contextualize an event, color a people, but investigations and ethnographies do nothing else. A good poem may serve as prayer, but if there’s a God, should we have to raise our plaint to Him in the highest register to earn an audience?

Asiya Wadud’s debut collection, Crosslight for Youngbird, is searching, extroverted, and humane, yet concerns itself with the misery, doubt, and confusion of forced exodus and unwelcome borders, returning again and again to the current migrant crisis in Europe and the Middle East. Wilfred Owen, the British WWI poet, once wrote, “My subject is War, and the pity of War. The Poetry is in the pity.” Wadud’s poetry, too, is in the pity, but not the pity of the journalist reporting from the scene nor of the ethicist arguing her way towards greater justice: her pity is the poet’s pity — trying to cup in her hands  (to make cohere) the splintered pieces of an actual, human soul.

Crosslight for Youngbird is divided into two sections — “northern wheatear see water” and “salt carrion constellation.” The northern wheatear is a small, migratory bird that traces a path from Africa, where it winters, to the stony coasts of Europe, Canada, and Alaska, one of the longest treks for a bird its size. And so, fittingly, the northern wheatear’s eponymous Part I circles the migrant crisis in widening, avian loops. Part II deals with a range of subjects personal and international, all haunted by the world as presented in Part I. A line from Dereck Walcott’s The Schooner Flight serves as epigraph for the opening section: “…and either I’m nobody, or I’m a nation.” The work of recovering these castaways from their anonymity by standing anonymous with them, reaching towards them, not speaking for them, is an animating urge behind the first half of the book. What sense are we to make of our circumstances — lonely, dying, scattered, naked in the gaze of an absent God?

The opening poem, “home 16 ways,” is, like much of the collection, a prose poem that moves between conversational and staccato rhythms, resulting in verse that feels like the demotic encroaching on the divine, like an aggrieved human asserting her humanity to God by implying deliverance God fails to grant:

Keleti. Lampedusa. Calais. Quietude. Mash’allah. Hamburg. Patera. Skorskog. A sovereign nation’s peach flag. And 16 ways to say home. After home is a bounty. After home is wrought in name alone. And after it’s a new shame. A savage pummeling at the Balkan border. Young bird, wings relent. But Mash’allah always: a crisp, clean swift.

The repetition of Mash’allah, meaning “as God wills,” among the names of these sites of dispossession is either bitter irony or else zealous abjection before fate and God. Wadud maintains that tension between acceptance of fate and awareness of the unfairness of fate even in righteous anger. “Lida meet Lorry (after Parndorf)” speaks to the asphyxiation deaths of 71 Iraqi, Syrian, and Afghani migrants and refugees inside the trailer of a smuggler’s lorry.

Her name was Lida. From the family of Rahm. Someone loved the baby and boarded her on a northbound lorry. They began their journey in Röszke. Revved the engine maybe, standing room only, undoubtedly. The man at the wheel, Mitko, I wonder where he keeps his own humanity. Tucked in a hull abut his neat steady breathing. Maybe a wallet photo of his own mother to remind him he’s still breathing. Shame he won’t extend outstretched to the 71 asphyxiating.

Seething, subdued snideness is all the judgment Wadud allows herself, letting the circumstances speak for themselves, well as they can. A Notes section in the back of the book lists BBC and New York Times stories about the incident. The BBC story, written a year after the discovery of the truck, notes the victim’s countries of origin, names some, profiles a few. There was a baby among the dead. Early reports of what happened, naturally, fail to relay anything personal about the victims, as that information hadn’t yet been learned. In every early article, they are described as migrants, refugees or the 71, and given that they — nameless, faceless — were found in the back of a truck, a truck originally used to transport meat, the Slovak slogan “Happy Chicken” still emblazoned on the side of the trailer, a sickening association develops. Read through the first dozen articles written after the discovery. You’ll search for something to hang their humanity on — a story, a name. Wadud writes:

You can say their names. They were named. Some mother. Some father, pushed the baby into the waiting new world. Some mother gripped the yolk sack between her teeth. Some father held the baby just the length of his musculature. Eyes glisten for this one, alive. Make to see life. And then name them.

Whom is Wadud exhorting to recognize and hold up the individual humanity of the dead? Mitko, the homicidally negligent driver? God, the homicidally negligent creator? The reader, to whom this story may be no more than that, just another sad story from a time and place spoiling with them? Or is she talking to herself, narrating the work she’s set herself to and defining its limitations, acknowledging that there’s little to do over a grave but sing yet that a threnody is not a resurrection? The New York Times story listed in the Notes section for this poem describes how, the day after these 71 were found dead, 81 barely escaped the same fate.

In Youngbird, highwaterhome, Wadud pivots outward from the migrant crisis to related domains: “I was born poor and black just below the Mason-Dixon line where a just God justifies all my light inside.”

The speaker is another sort of refugee — “slave marooned” in Wadud’s phrasing. Forecasting the inheritance of those who make it to Hamburg, to Munich, Wadud writes:

All my life somebody say, where are you from as if this was never my country. … You want some country just count your brethren. At 9 I start writing letters to girls across my country eke out some curve of a sovereign nation and the bevy of letters becomes the world: Joburg, Vienna, Manila, Accra, Milan, Lima to Tokyo troubling some country festooned with sun — when a country doesn’t claim you, just gather your own.

A nation lost is never recovered, and in constellating its diaspora, you trace a picture that reveals the longitude of the earth. Still, what is a nation but a story we tell ourselves about who we are? Wadud’s American tells her own story:

Grant me my own story to come with a country. And don’t be so sure the river flows downstream. Truth be we maybe all long for the same long. All and seek a sturdy highwaterhome. I love a country and warm to most borders. I love a country that abuts some sun. Me, I’m just free. And anyway, know a country’s levee will always breech a border. So pass through a ready sieve some what you need to make a little country by the supple, giving sea.

With luminous self-possession like that, who needs a God to grant your light? Still, this is a God-haunted collection. Wadud speaks to God across traditions — Muslim, Catholic — sees him in all nations, as if He is the only unfettered thing in a bordered world. Yet whether this collection qualifies as religious poetry — the qualification being, I suppose, that the author is genuinely religious and draws primary inspiration from the promise of the divine — is unclear. Actually, I’d say it’s doubtful, that she is doubtful — caught between the palliative of belief and the unjustness of the fallen, falling world. There’s no clear indication of Wadud’s personal theology, but the crumbs of doubt, of disappointment in God, lead out from the desert and back to humanity. In “Remember we, too, are but the fold/a struggle to reach the Astral,” she paints a humanitarian’s picture of the chiaroscuro of Godly grace and mercilessness.

Light becomes luminous when you name is light. …Anything can be light when you call it light.

All light ultimately crests, new light reaches. I assume this is God’s will. I assume God’s will is ascendant.

Not selling for assumption, Wadud dialogues directly with God in a long poem from Part II, “testament, a litany for many voices.” The litany reads like an inquisition, a breathless attempt at self-reassurance. God, as ever, grants us no answers:

SOLO
God is love
GOD
He is, he is not
SOLO
God betrays his lot
GOD
He will not, he will not

God mounts no defense of His apparent absence of from human affairs, assured that he loves when he can:
ALL
God’s deepest belief is to be honest and free
Omniscient and observant
Omnipresent and omnipotent
SOLO
All love?
GOD
All is love
SOLO
This is love?
GOD
This is love
Some comfort that is. And if it’s true that all that is is God’s love, isn’t it equally true that humanity has crafted for itself a better vision of what love can be? Think, though, how often we fail in our duty to one another. It may be as hard to have faith in goodness of people as in the existence of God. To God, the chorus responds:

Faith is nearly the hope, this ancient backbone
but
Faith is a windowless sanctuary
Faith is a bludgeoned belief
Faith is a promise to the unseen and
Faith is a rotting dream

And yet we dream — of the betterment of our world and of our knowledge. Or, at least, of the betterment of our faith that such dreams might be achievable. Even in the poems that concern themselves with parts of life far from God — a ghostly erasure poem about domestic life, an observance of subway riders’ unease when a bee boards a Brooklyn-bound N train (my vote for the strongest poem in the collection) — God’s absence is a palpable given how much attention He’s given in the bulk of the poems. Reminders of the crisis abroad resound in how fearfully borders are observed, how moments are joy are inflected by our acquaintance with misery.

Can poetry better our world and knowledge, make sense of our earthly failings and poverty? No. The only art that makes sense of mass death and exodus is the devil’s rhetoric. Rather, poetry makes music of it, a dirge. We lift our voices to God — in hope, doubt and wonderment. Why not to one another? 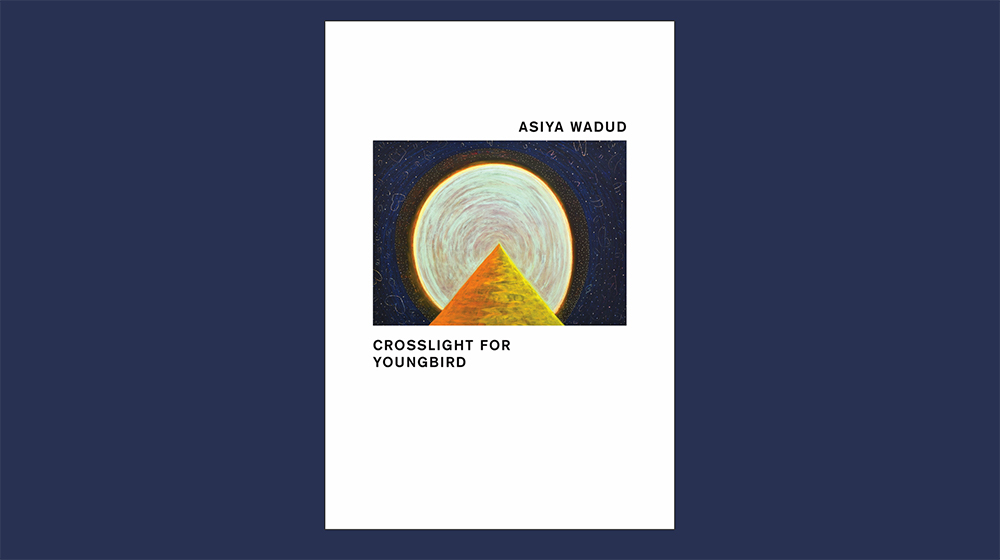