Toward the end of Ariana Reines’s new book, A Sand Book, she writes “The words aren’t mine.” Given the collection’s circular journey, this disclaimer (appearing in the notes to the last section) could be the beginning of her rumination on love, violence, systems and histories of oppression, feminism, social media, screens, sex, and spirituality — a collective voice of and for our time that transcends the writer’s own.

In Reines’s long-awaited A Sand Book, we move suddenly from the speaker’s quotidian rituals to (neo)colonial and violent histories to generational traumas. Ultimately a meditation on language (“We were lost in a language of images”) and that which remains unsayable, the book contains 12 sections. “MOSAIC,” the penultimate section, departs stylistically from the fluidity of the previous 11 sections, consisting of short, prophetic-like declarations in white capital letters on black pages. The motif of sand that occurs throughout in various forms — glass, deposit, dust — does not seem to pass through “MOSAIC,” recalling a line from the first section: “Sediments of our relations/ Now spun to so fine a mesh/ Even dust cannot pass through it.”

Reines’s poetry harnesses the potency and agency of language while also acknowledging its incapabilities and weaknesses. At times, the collection breaks out of language into image, including clouds and a mirror selfie with a superimposed emoji. While Reines’s use of images differs from the Sebaldian technique which draws on the speculative or imaginative via found photography, they are both fascinated by memory and history.

Reines strings together associations into a tangled, subsuming web. And yet, we reach a sort of center in “A PARTIAL HISTORY OF IRIDESCENCE” where the poem “Sandra” (in reference to Sandra Bland) is noticeably centered unlike the rest of the left-justified poetry in the book. Here we see both the shortcomings of words and images where

The other side of seeing being

It doesn’t stop them

It doesn’t stop them

It doesn’t stop them at all.

The repetition of “doesn’t stop” performs its precise function, refusing to stop at the level of language. Yet images, “film,” and “seeing” fail just as language does where “the saying feels futile / … because enough cannot be said / & it is no longer a matter of words.” Yet Reines is not arguing for language’s lack of power. Her poems remind us that language and words are tied to systemic oppression and violence. Taking control of language, she suggests, can potentially destabilize these relationships. Still, we see her struggling to put into words precise emotions, injustices, and experiences. The centering of “Sandra” offers a different way of seeing, something more akin to a circle, the continuation of the perpetual violence on Black bodies and the larger systems and media at play.

Elsewhere, we see Reines’s struggle to contain and express such traumas — and place them within non-sequential, or rather circular, time — such as in “Legend” where:

…More grief was pouring
From me than I could comprehend
& I was one
Not unaccustomed to grief
This was the sorrow of a whole people
It feels strange to declare
It was yet stranger to behold passing
Through me. ‘I’ was not the one
In tears. ‘It’ was.
& there began my history
Following a bird thru
The sand & its people.

The grief and sorrow the poet mentions here is not just the speaker’s, but rather “of a whole people.” “It” has a lineage tracing back to peoples before the “I” and thus conflates past histories with the present. Rather than haunting the present, “it” is a “barely-remarked-upon catastrophe that was over / Both before and after it was too late.” Traumas of generations ago find themselves not as specters, but as palpable life in the present moment. The exchange of “I” for “whole people” and “my” for “it” replaces subjecthood with objecthood — the “I” is also an “it.” Language cannot come close to actualizing the great grief Reines evokes. Instead,  trauma causes the “I” to become an “it,” a stand in for trauma, itself. Such is the transformation in “Open Fifths,” where the poem comes to embody “colonial horror”: “Rather spiderish my poem unspooling out of me / . . . / Of me’s the sensation I’m being come into by six / Hundred years of colonial horror as in that Adrienne / Rich poem, the one that is for me her masterpiece.”

Violent circles continue in “Armorica,” where, after learning of a school shooting on her phone, a mother at a grocery store continues her shopping:

The language, focusing on the quotidian of her day, seems undeniably futile in contrast to the Stoneman Douglas High School shooting. The “list” form recalls the repetition of “doesn’t stop” in “Sandra,” as everyday rituals continue despite national tragedy. The poem doesn’t make a full stop until it ends with the date, sans punctuation, which suddenly seems arbitrary in a world where time “doesn’t stop.”

In “Thursday,” Reines continues to explore the simultaneity of time as “A cracker whitens on the tongue of the hanged man / My velvet is sucked down the sea / The sea wall is chipped blue/ The clock of Palestine.” The latter image brings to mind queer theorist Jasbir Puar’s scholarship on time in Palestine, particularly the withholding of futurity and the colonization of temporality, in part through checkpoints. In The Right to Maim: Debility, Capacity, Disability, Puar extends literary scholar Rob Nixon’s term “slow violence,” which describes what war casualties do not account for, including but not limited to the ecological aftermath of war, generational trauma, and genetic deteriorations and alterations due to chemicals, such as depleted uranium. In the introduction to her previous book, Terrorist Assemblages, Puar describes haunting as the “becoming-future” — that is, the nonexistent future as both a cause of debilitation and the effect of debilitation.

The nonexistent future is evident in “Thursday,” which withholds what will become of the dissolved cracker and the chipped away sea wall. Reines seems to be suggesting how unnatural slow violence is as a marker of time and, much like Puar, is asking us to explore the social and historical forces that interrupt the natural progression of time. The title of the poem “Thursday” serves as a conventional marker of time as does the end of the poem marking the date, “14 february 2012” — another February 14th, as in “Armorica.” Is it a holiday? An anniversary? A coincidence? A return to a different type of violence, but violence just the same? The dust does not settle in A Sand Book. And this is its major strength: a timeless book of poetry that is concurrently of our time, embodying the “contemporaneous past.” 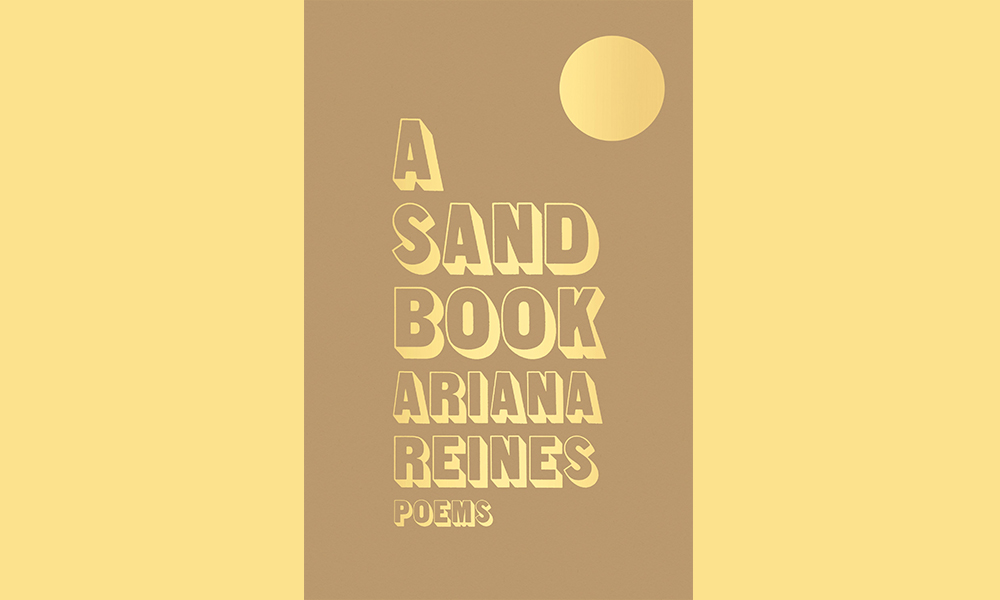