In one of the zanily brainy heart-to-hearts that animate this raucous modern-day Anatomy of Melancholy, the Pirate Who Does Not Know the Value of Pi confesses a deep-seated fear to his fine-feathered friend, the parrot. Early in the confession, which ranges over two pages, the pirate makes mention of his “lucky falchion, the one whose scabbard has my mother’s beadwork of quotations from Sydney Dobell, he of the Spasmodic school.” Sydney Dobell? Well, that sent me hunting for my Stuffed Owl, on the double — alack, without the pirate’s trusty “double-sudden blunderbuss № 00.” The be-Dobelled scabbard should help readers get a bead on our author’s poetic licentiousness, his readiness to raid the can(n)ons of any landmass within eyeshot. And why not? The tale he has to tell is as old and involuted as Scheherazade’s — in fact:

The history of the Pirate Who Does Not Know the Value of Pi and his parrot goes way back, to the ancient Geeks and possibly even backer. Homer did not insert it into the Odyssey because he wished to avoid epic retardation. Hesiod kept it out of Works and Days because he couldn’t decide which it was more, works or days. It was Psittachus that composed the definitive version in elegiac quadrupeds. However, his dog ate it. Psittachus succeeded in making his dog throw up, but unfortunately proved unable to read the contents. “The high point of my poetic life, mangé!” cried Psittachus and rushed off to the agora but got lost on the way because he had Rhapsodic Memory Disorder which is why he couldn’t reconstruct the elegy in his head.

From Homer to the relative merits of Ginger and Mary Ann in Gilligan’s Island, nothing is lost on Eugene Ostashevsky, the Russian-American poet and translator who’s hatched The Pirate Who Does Not Know the Value of Pi. This “poem-novel” is a seriocomic linguistic performance the likes of which we rarely see, in any tongue, but it wasn’t plucked out of thin air. Ostashevsky, whose two preceding collections are titled, tellingly, The Life and Opinions of DJ Spinoza (Ugly Duckling Presse, 2008) and Iterature (UDP, 2005), has been developing his patchwork technique for years, stitching high theory onto deliriously playful, Edward Learian rhymes, in an effort to make each element pull more weight than it would in isolation, but also to loosen things up. Hierarchies be damned; the pursuit of wisdom is a free-for-all, a real “pirate party, so shake your booty”: “Never mind The Groundwork / For the Metaphysics of Morals — / Shimmy with your scimitar and uncorral some quarrels.”

The Pirate has his forebears. Lear is one, as are Lewis Carroll, the Dadaists, Joyce, and the loopier representatives of Oulipo, but few of Ostashevsky’s predecessors have plumbed the philosophical depths of nonsense with the aplomb of Daniil Kharms (1905-1942), Alexander Vvedensky (1904-1941), and the other members of the short-lived Soviet avant-garde group OBERIU (“The Union of Real Art”). It’s not by chance that Ostashevsky has dedicated so much of his creative energy to introducing the work of the “Oberiuts” to a broad Anglophone audience, editing OBERIU: An Anthology of Russian Absurdism (Northwestern University Press, 2006) and co-editing and co-translating, with Matvei Yankelevich, Alexander Vvedensky: An Invitation for Me to Think (NYRB Poets, 2013). Like The Pirate, the Oberiuts’ writings are perched (AARGH, is there no escaping the psittacine puns?) above a chasm of meaninglessness. Their delightfully comic gestures always point to the failings of language, its propensity to undermine itself, and, hence, to the impossibility of communication. The matter of incommunicability should concern us all, but it’s especially pressing for an émigré poet. And this brings us back to the pirate’s confession:

unformulated; ineffable; and therefore not even truly a thing; certainly not truly mine
yet also no one else’s but mine; mine exclusively, inalienably

For all its vivacity, Ostashevsky’s book is shot through with despair. It is, after all, a song of castaways, of desert islands within and without:

Of ARRRGHs and the pirate I sing
and of the parrot and entailments.

The pirate tells a tale of great odds. The day ends.
The nearsighted evening,

evening out all prizes, all signs of shipping,
dissolves what cut on the horizon

harbors his pie.
The parrot ponders what his tale meant.

He analyzes its particulars for arguments,
meaning to find meaning, but they are random —

And yet, it is a beautiful song, broadcast by an outcast whose language is all his own: “Blessed be the undiscovered person whose language is his. (Says the PIRATE, drumming.) His reactions are natural, his gestures simple, the expression of his feeling unaffected. (The PARROT says.)” True, the parrot may be overstating matters, but at least such a person “does not take dictation from a dictionary.” At book’s end, as pirate and parrot ascend a palm tree in fruitless anticipating of discovery, I thought of another palm, planted at the end of another mind, in which a “gold-feathered bird” sings “without human meaning, / Without human feeling, a foreign song.” Like Wallace Stevens, mutatis mutandis, Ostashevsky inspires us to find pleasure, if not a firm foothold, in the shifting sands of mere being.

Artwork by Eugene and Anne Timerman. 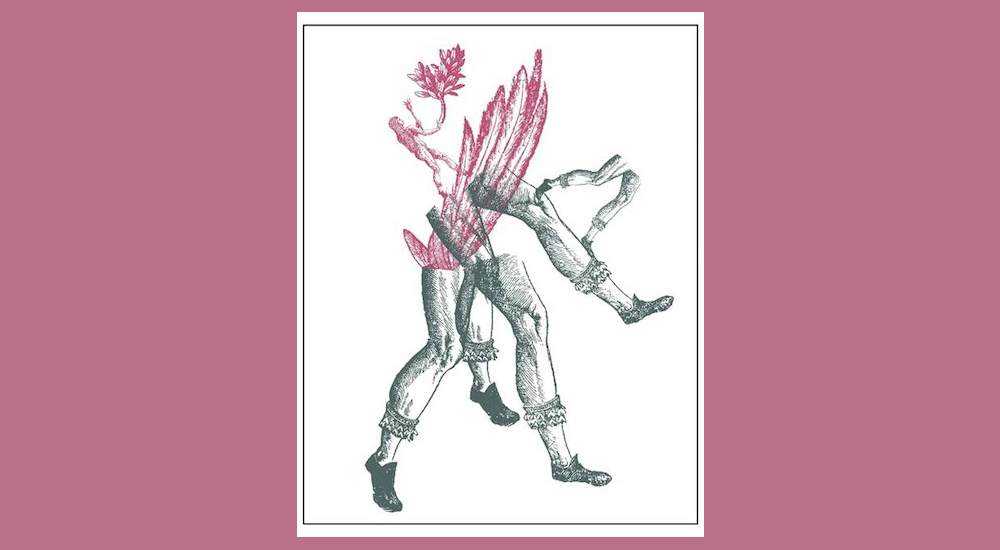