We are now a full decade removed from the Global Financial Crisis — ancient history by contemporary cultural standards, as seen in the collective forgetting culminating with the cavalier dismantling of the not-much-but-better-than-nothing Dodd-Frank reforms. So it is an opportune moment to step back and assess the crisis as history, which is the mission of Crashed by Adam Tooze, one of the leading historians of his generation.

In this sprawling, ambitious, undisciplined, and often deeply insightful book, Crashed makes a number of astute observations — noteworthy ledes that are too often buried in the particulars. Global in scope, if with an emphasis on the U.S., the Eurozone, and Eastern Europe, Tooze perceptively identifies the roots of and continuities attendant to the crisis, strengths that are most evident in the book’s treatment of the American case. In particular, Crashed argues convincingly that the Global Financial Crisis both exacerbated and, in the heat of the moment, obscured, troubling trends afoot within the United States. Our current civil catastrophe can only be understood in this context.

America painted itself into a political corner with three regrettable decisions: the 1990s Clinton-Democrats embrace of Wall Street and the Robert Rubin/Larry Summers-championed dismantling of financial regulations that followed; the Republican renunciation of fiscal responsibility, with the massive, skewed-towards-the-wealthy George W. Bush tax cuts; and the catastrophic choice to embark on the long, costly and ruinous Iraq War, an act of geopolitical self-mutilation. These blunders aggravated the growing problem of income inequality and social stratification — and were also suggestive of a diffusion of international power and relative American decline. (In this context, globally the crisis “appeared as one more sign of America’s fading dominance.”) It also elicited widespread popular revulsion against the guardians of the status quo, resulting in the astonishing victory of Barack Obama over Hillary Clinton, as well as the nomination of the “patently unqualified” Sarah Palin for Vice President of the United States by the Republican Party. A “laughingstock of the world” her popularity at home should have been a canary in the coal mine for the emergence of a powerful anti-rationalist, know-nothing political undercurrent in American politics.

These points, and others, are established in Tooze’s concise, well-argued introduction, which articulates the main themes of the book, including why the Global Financial Crisis and its aftermath “are essential to understanding the changing face of the world today,” the need to situate that crisis in “its wider political and geopolitical context,” and to understand how the seemingly distinct traumas in the Eurozone that followed are “essentially interrelated” phenomena. This all sounds right, and promising. Unfortunately, the 600-plus pages that follow often read like they are flowing from the pen of an accomplished international affairs columnist with a globetrotting byline for a leading broadsheet. That is not necessarily a bad thing. But it is incongruous, and arguably not the optimal dedication of the talents of a gifted historian known for a massive, meticulous, prize-winning study of the economic pressures related to the Nazi War effort, and more recently a celebrated account of the emergence of America as a world power during and after the First World War.

The first three parts of the Crashed are disadvantaged by the fact that they mostly cover well-trodden ground. The book does feature a must-read chapter on how the massive provision of global liquidity by the Federal Reserve saved the world’s financial system from completely imploding. “Acting in the enlightened self-interest of the U.S. financial system,” and without debate or fanfare, the Fed “made itself into a lender of last resort for the world.” Left implicit is that the antonym of “enlightened self-interest” is “America first” — a chilling thought to keep in mind when the next financial crisis comes knocking. But more generally, library shelves are already packed with volumes on the crisis and how it unfolded; standouts include 13 Bankers: The Wall Street Takeover and the Next Financial Meltdown, by Simon Johnson and James Kwak, Martin Wolf’s The Shifts and the Shocks: What We’ve Learned — and Still Have to Learn — from the Financial Crisis, as a well as the valuable, detail-laden Financial Crisis Inquiry Report and countless memoirs and journalistic accounts. And much of what we really need to know boils down to one sentence from Alan Blinder: “it was shameful business practices, coupled with regulatory neglect, that got us into this mess.”

Similarly, despite particularly strong passages on Greece, it is difficult for discussions of the profound pathologies of the Eurozone system, the important but overcautious American stimulus, and the misguided, politically-motivated resurgence of austerity measures to do more than add a pitch-perfect voice to a crowded chorus. This puts tremendous pressure on the final quarter of the book, “Aftershocks,” to have something new to say. It does, but even here the narrative shares too many of the less welcome qualities of the first three parts of Crashed — breathless, blow-by-blow accounts (often day-to-day and even hour-by-hour), featuring minute details that add more color than substance.

This is unfortunate, because there are some real aces among the many cards that Tooze has scattered on the table. Crashed develops an impressive thesis with its shrewd, eagle-eyed contextualization of the contemporary American catastrophe, homing in on two moments, one before the Global Financial Crisis and the other after its (apparent) resolution. In 2006, Barack Obama, then in his second year as the junior Senator from Illinois, warned that the failure to address the concerns of those who have been made less secure by stagnant incomes, growing inequality and economic globalization will lead to greater nativism, protectionism and “anti-immigration sentiment.” But this was under-appreciated by an ensconced, centrist Democratic party (and it was not just Republicans, but elite Clinton Democrats who could not race fast enough though the gilded revolving doors of the Wall Street/Washington DC axis). And Obama’s re-election in 2012 was misunderstood as the “triumph of centrist liberalism,” with the Global Financial Crisis contained, and the “Palin tendency” fading.

As Tooze argues convincingly, this was a mirage, and “the presidential race of 2016 turned out to be more about the financial crisis of 2008 than 2012 had been” — as suggested by the startling successes of should-have-been barely fringe candidates like an obscure democratic-socialist from Vermont, and a malevolent, race-baiting reality TV star. But both major parties failed to reckon with the meaning of 2008, especially in the broader context of the years leading up to it: widening inequality, increasing globalization, and a decade of long, losing wars. The Clintons had cut the party loose from the vestiges of its New Deal roots, and it was not to his credit that Obama, “by inclination a bipartisan centrist” stocked his Treasury department with Rubin/Summers backbenchers.

Trump’s victory, however, was not simply the result of an out-of-touch Democratic Party. He first had to capture the Republican nomination, without an hour of political experience or a hint of commitment to any of the Party’s core principles. Yet he steamrolled through a formidable field. If the Democratic Party faced the challenge of deep divisions deriving from Main Street dissatisfaction with its establishment class, the GOP was unrecognizable and in utter disarray. As Tooze puts it, “If someone had written a script as to how an economic crisis and democratic decay would lead to a nationalist backlash in the United States, this denouement might have seemed a little cartoonish.”

Crashed doesn’t offer an easy way out of this mess. But in terms of its diagnosis, there is a great book lurking within the widely separated covers that hold this one together. Hopefully readers will come away with a clear-eyed understanding of the important observations on offer, but there is a real risk that they will instead become lost and disoriented under an avalanche of details. 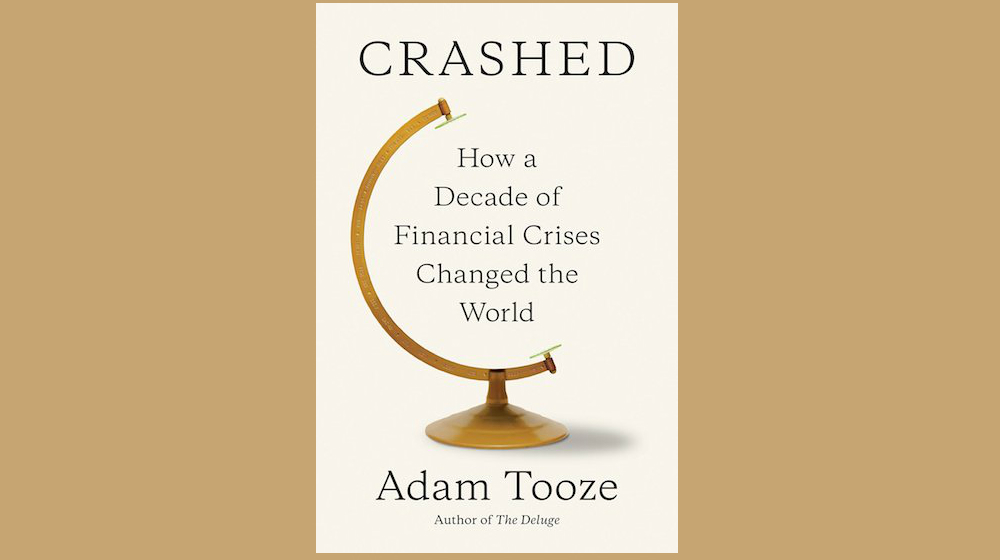