Readers are warned that this essay contains work by deceased people. It was written on Whadjuk land and I pay my respects to Elders past, present, and future.

When readers think through important moments in Australian history, the international Left, or socialist realist texts, many would not think of the 1946 Pilbara Strike and the works of literature in English that emerged from it. And yet, it matters for each of these fields, as well as for aesthetics, politics, and identity more broadly. Most Americans have likely not heard of the Strike, but neither have many outside of where it occurred in Western Australia, including even those in the eastern states of Australia. This suggests something of the focused regionalism that goes with the power relations involved in representation. We are dealing with a frontier history, not a metropolitan one — a peripheral event to the minds of those in national and overseas capitals. From my perspective, the willful ignorance around the Pilbara Strike needs correcting, and what follows is intended as part of a historiographic reparation to aid our contemporary understanding of the world.

The 1946 Pilbara Strike was an industrial relations action, an expression of community solidarity, and a type of land rights activism, which involved 23 Aboriginal language groups. Many non-Indigenous fellow travelers joined them, including Newman-born white activist Don McLeod. He expressed the idea of autonomy in a different language that appealed to workers who were being exploited on their traditional, un-ceded, and sovereign lands. McLeod worked closely with many people at the grassroots level and is an important figure in his own right. But it was Dooley Bin Bin, a Nyangumarta man, and Clancy McKenna, a Nyamal man, who led the Strike. One of their innovations in the history of protest was to travel hundreds of miles by bicycle to different cattle stations posing as relatives of workers, delivering tins of jam. On the back of the tins’ paper labels were calendars that allowed people to mark the days off until the protest began in earnest. The workers decided to wait until the end of World War II to act. Beginning May 1, 1946, they refused to work for rations. In one way of telling it, the Strike lasted for three years and was successful. In another, it ran for much longer and leaves a more contested legacy. After all, it could be read as signalling a shift away from the countryside and the demise of pastoralism as a way of life, as well as the encroachment of a monetary economy that further undermined traditional forms of exchange. Those discussions, and whether the Strike was good or bad overall, are ongoing among traditional owners in a number of communities, especially Elders who remember the protest. This includes Alice Mitchell and Bruce Thomas in Port Headland and Stephen Stewart in Yandeyarra. Historians such as Anne Scrimgeour, Victoria Haskins, and Julie Armstrong have all written pieces too, and debate the event in their own way. The Strike also lives on in other forms including online publications, activist oral memory, and community forums. There have been at least two important memoirs in book form: How the West Was Lost by Don McLeod and Kangkushot, about Nyamal leader Peter Coppin, by Jolly Read. The Pilbara Strike is by no means forgotten, but neither is it well known, especially internationally. And yet, at the time, it was a globally networked event and the pastoral workers had support from all around the world. This included Communist Party members in Boorloo/Perth, dockworkers in neighboring ports, and governments in Moscow and Kerala. The Strikers connected with people outside their language groups and beyond their homelands to map out a new set of social relations that would be a truer expression of their working lives. But the aspect of the Strike that interests me here is the works of literature.

Many of the writers who supported the Strikers in this period were based in the West Australian state capital of Boorloo/Perth, but they took aesthetic inspiration from socialist realism as it was practiced in the Soviet Union. This included writing that represented the proletariat, focusing on politically engaged stories of daily life. Out of these writers, perhaps the most important figure to visit the Pilbara was Donald Stuart. Born in the beachside suburb of Cottesloe in 1913, Stuart spent his early adulthood as a swagman (itinerant worker) in the north of the state. He became a soldier and fought in World War II, including time as a POW on the Burma Railway. Upon his return, Stuart lived and worked with many Aboriginal people all over the state before retiring to Rubibi/Broome in Yawuru country and dying there in 1983.

Published in 1959, Stuart’s first book Yandy is set against the background of the Strike. In its time, the book was critically acclaimed, a commercial success, and on school syllabi. But in recent years it has fallen by the wayside — many of the literary critics and avid readers I know have not even heard of Stuart. Some reasons for this might include the politics of appropriation, the fall of Communism and the related demise of socialist realism, and the shift away from local histories. Despite Yandy’s marginalization in recent years, the work remains instructive today. I do not want to suggest that Stuart is not a problematic figure, nor that the book is without fault, but simply to share my appreciation of the text for what it adds to the historical conversation. The easier reading would simply dismiss it for its ideology, style, and form. The challenge is to find something useful in it. After all, Stuart’s writing matters for literature and politics in places that face similar struggles today and that are still ongoing in the Pilbara. This is about speaking back to the history before us, and reflecting on ourselves as a society more enmeshed in market forces since 1946.

Like many Australian novels of the 1950s, Yandy has highly romantic, lyrical depictions of nature; a vocabulary of internalized eugenics; and, people of color primarily represented in service roles (e.g. Francis, the Filipino cook). But somewhat distinct from many other texts, Yandy focuses on economics and is firmly located in the Pilbara. This means that there are long, drawn-out scenes discussing labor, wages, payment, pastoralism, mining, exchange, transaction, and finance. As Stuart says at one point, “shell meant money, and money was the thing above all others.” Aboriginal workers are often presented as “proud,” “dignified,” “resolute,” “upstanding,” and “enduring.” One scene where we see Stuart’s focus on economics and protest is when the text goes into great detail about bond money used to secure the release of Strikers from jail. After all, the Strikers are seen to be doing something illegal and one of their actions of civil disobedience was to flood the jails and place pressure on the legal system. As Stuart writes of collecting money:

“Chuck in, everybody gotta chuck in,” said Sampey, and no one hung back. Sampey counted it over twice, and made it nearly six pounds. He handed the money, notes and silver and coppers, to Dooley, and Dooley put it away more carefully in his pocket, plugging a red and white neckrag down tight on top of it.

It highlights not only Stuart’s labor perspective, but also the collective political action of Strikers. This goes hand in hand with other forms of protest and economics, including hunting and gathering wild pigs and fish for food, donations from sympathetic people outside the Pilbara, earning income from small scale mining (also known as “yandying,” which gives the book its title), and occasional jobs performed outside the region, with workers sending money home.

And yet, the economics in Yandy is only half the story. The Strikers are also connected to their traditions, and Stuart weaves in mythic stories, commentary on kinship, and participant observation of rituals, including attention to scarification and male initiation. This particularity locates the work firmly in the Pilbara. If the emphasis on economics connects Yandy to any number of other works in a world of market forces and protest literature, it becomes a Pilbara story with these other details. This includes the use of Nyangumarta and other Indigenous languages for dialogue, short asides on goanna hunting (which is true to my own experience there), and the opposition that faces ordinary workers. Here, the police, squatters, and station owners provide the source of conflict. As Stuart writes, “They knew the Police would always be the enemy.” This could well hold true today, given high incarceration rates and the myriad competing laws on the continent. In one truly affecting scene, the police raid the worker’s camp and shoot their dogs. This retains its potency given how important these companions were and still are. Despite these hardships and hostilities, the Strikers are not alone, and find their comrades in visiting pastors (who are attacked by local white racists) and the Seamen’s Union, who support them from the ports to the south.

Yandy’s function is historical, which makes it similar to many other works in a Marxist tradition. It is historical in the sense of being about history (given that Stuart wrote about events that happened over a decade before) and that it believes in a materialist view of the world, which comes through in its gaze, ideology, and style. We can sense that Stuart truly believed in the Strike and grew fond of its participants, feeling like he had a literary responsibility to represent them to an audience of sympathizers who would never make it in the country. And, for all the work’s faults, the author’s sympathy makes the work matter beyond its own time, reinforcing its historical lessons in our contemporary social and economic landscape.

When we read Yandy we must situate it in today’s context. In doing so, we ought to remember that there are a few structuring narratives that are applied to this continent, especially when it comes to talking about the nation of “Australia.” One of the enduring narratives is the conflict between white settlers and Indigenous peoples. From first contact to frontier massacres to the Stolen Generation, all of these clashes have left different legacies and intergenerational traumas. But there is another story told in this place, which does not erase people of color nor does it focus on opposing sides. That story, which is simply many stories, finds its heart in collaboration, in solidarity, in working together. It is one of multiplicity and unity.

The 1946 Pilbara Strike is one such story. Its success required traditional owners, white allies, and non-white, non-Indigenous people of color from across the world to put things right. The soft structuralism of that has not changed. To my mind it is an informative way to look at our society now, to demonstrate a coalition that comes together with a sense of purpose, good will, and possibility. Stuart was part of that too — not a perfect writer with perfect style or perfect politics, but an important voice to accompany local writers like Nyamal poet Donald Norman. Norman was the Strike’s bard and sang tjaabi poems for his people as they worked to get their land back, demanded industrial rights, and spoke truth to the power that oppressed them. That belief, that determination, that story is also chronicled in Yandy, where Stuart added his voice to the chorus of resistance. As readers today, this historical moment and its texts are worth re-visiting, lest we forget how to be fellow travelers in a world that needs us more than ever. 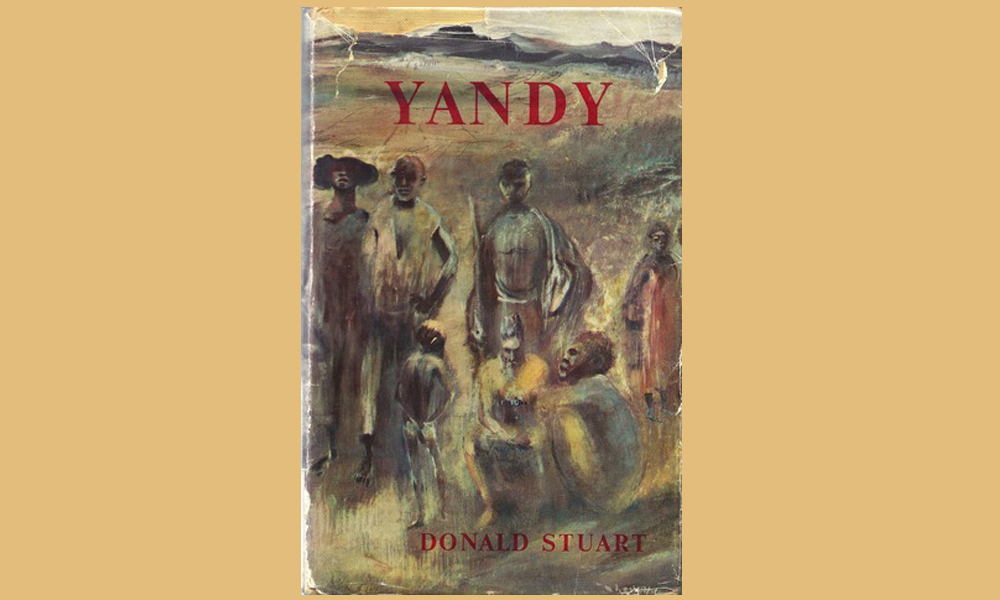