Frank Reiss, owner of Atlanta’s A Cappella Books, was in a bright mood when I spoke with him in February. He certainly had cause for celebration: in a few days, his store would be hosting acclaimed author Zadie Smith at Atlanta’s SCADshow venue for a discussion of Get Free, her new collection of essays. The significance of the occasion was lost on no one. “My daughter’s actually flying out from Dallas, just to see Zadie,” Frank said with pride.

Events of this caliber aren’t unusual for A Cappella, a charmingly unassuming bookshop that has punched well above its weight throughout its three-decade history as an Atlanta literary hub. (Frank notes that they initially had just 500 square feet of selling space in their current location — it has since increased, but remains small and intimate). Over the years, the store has played host to scores of luminaries from various disciplines; Frank recalled talks with Salman Rushdie, Patti Smith, and Bernie Sanders with particular fondness. When asked whether these events have helped A Cappella’s business, Frank laughed. “There was a time — in the early days of Amazon, when it looked like physical bookstores might not make it — when those events basically became my business. They were all that was going to allow us to stick around.” In the face of ever-increasing market pressure from online and big-box book retailers, A Cappella has emphasized the unique value of the independent bookstore as a space for literary community. On top of the readings and interviews already mentioned, A Cappella sponsors nearly a dozen book clubs where people can gather to discuss subjects such as science fiction, classics, critical race theory, and biography.

Despite this remarkable record as a venue for Atlanta’s literary culture, A Cappella’s main focus has always been on the books themselves. Prior to opening A Cappella in 1989, Frank worked for nearly a decade at Acorn Books in San Francisco, a storied institution specializing in used, out-of-print, and antiquarian works. Frank brought his love of old books with him to A Cappella, which for its first 10 years also positioned itself as an antiquarian bookshop. In keeping with this vision, Frank decided to open his store in Atlanta’s bohemian Little Five Points neighborhood — a place receptive to all things obscure and antique — which, despite three changes in location, remains the store’s home to this day. The rise of online booksellers like Amazon ultimately lead A Cappella to change its business model. “In the early days of the internet, as prices of out-of-print books were dropping, I was forced into broadening my vision of what we could do to stay in business,” Frank said. Today, alongside the used and out-of-print works that were the store’s first passion, A Cappella stocks a wide array of contemporary fiction, political nonfiction, art books, and music writing, among other genres. (Frank intended the store’s name to be a nod to its substantial collection of books about music.)

A Cappella’s current location — a small, red-brick structure which in bygone days served as the neighborhood grocery store — seems to epitomize a certain ideal of what the local, independent bookstore should look and feel like: labyrinthine corridors flanked by walls of books shelved from floor to ceiling. Frank is currently in the process of purchasing A Cappella’s building in an effort to remodel and expand the store’s floor space. Yet Frank emphasized the appeal of the small-scale bookstore, and the trade-offs that exist between a store’s size and its atmosphere: “You do worry — one of the great things about independent bookstores is that they feel individual, and if they start getting too big, it’s hard to distinguish what they do and how they operate from a corporate store.”

As his store’s expansion would suggest, Frank is optimistic about the future of the independent bookstore: “There’s a certain type of person likes to read electronically and shop for books on Amazon — we’re not going to win them back. We’re really aimed at people who like physical books, and I think they’re a self-selecting population. I think enough people seem to be attracted to the aesthetics of books, to book culture, to keep us going. Those are our people, and there’s really no sign of that type of person going away.” Not a member and want to receive special perks and discounts at A Cappella Books and other participating stores? Become a member and we’ll send you a Reckless Reader card and all the perks! 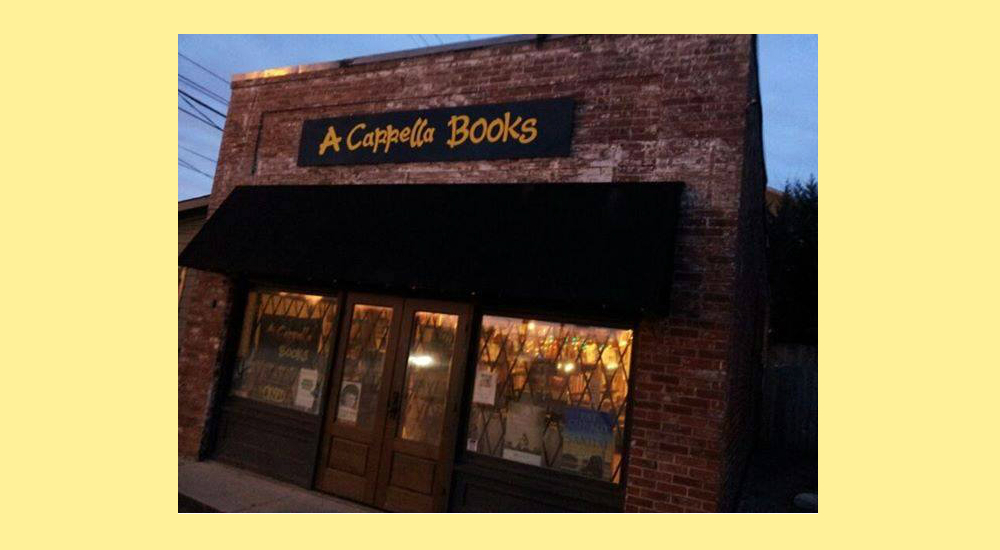