For a long time I was sure that Americans represented the new branch not only of social or historical growth but of biological evolution. They have a kind of immunity from classical European diseases (specifically psychological but also physical) but are annoyingly vulnerable to some specific ailments, like multiple personality syndrome (i.e. dissociative identity disorder) and bipolar disorder — which is as common in the USA as starvation in Africa. Alcoholism and depression in American culture are a part of professional risk, like rhinitis or gangrene for polar explorers. Americans always suffer from obesity and anxiety but are steady and sustainable in their refusal of such fatal temptations as totalitarian power, mind control, dictatorship or censorship. I believed this deeply, even though I was well aware of such periods of American history as the McCarthy era.

I was sure that under the worst circumstances there would be, in America, a single lonesome hero ready to stand up to the crowd of morons — and that this hero’s truth would certainly destroy the monolith of simple decisions and primitive minds. I knew that three American classics studied in every school are Lord of the Flies, Fahrenheit 451, and To Kill a Mockingbird. I knew that America would never repeat their KKK-experience and never forget Leo Frank. In comparison with Europe and especially Russia, the United States has never allowed anti-Semites to spread their activities because Jews were never an oppressed minority here.

This favorable historical and geographical situation helped America avoid many of the childish diseases of mankind — like the mass hypnosis of totalitarian propaganda or total economic slavery conditioned by ignorance.

But as we know, childish diseases are much more dangerous and traumatic when they attack adults. I know this from my personal experience, because I managed somehow to go through both the measles and the mumps during my Army service (maybe God helped me this way because while I was in the Army, I had more desperately needed short discharges for hospital stays than I had sick days during my school years).

America survives now all the childish maladies because there never had been a good old thorough vaccination which Russians had during all our long periods of serfdom and political reaction. America never had fascism but always was afraid of it.

I was sure that Americans could survive these maladies. But now we see that those examinations were not cancelled, just delayed. Americans are not the happy exclusion from the rest of the world’s problems, but rather typical representatives of mankind. America is not an ideal shelter from trouble, as we once thought it to be. If we want to find such a shelter,  we should look for another globe.

Such warnings and preventions like It Can’t Happen Here by Sinclair Lewis or The Dead Zone by Stephen King appeared periodically in the U.S., such personages as Greg Stillson were broadly discussed, and the words of Methodist minister Halford E. Luccock were well known to almost everybody: “The high-sounding phrase “the American way” will be used by interested groups intent on profit, to cover a multitude of sins against the American and Christian tradition, such sins as lawless violence, teargas and shotguns, denial of civil liberties…For never, probably, has there been a time when there was a more vigorous effort to surround social and international questions with such a fog of distortion and prejudices and hysterical appeal to fear.” These words were recalled in the times of George W. Bush, and they are is quoted and over quoted now (just like Luccock’s other famous quote: “Fascism in the US won’t be made in Germany, and it won’t be called fascism. It will be called ‘Americanism’”) Actually there’s no great nation that can do without the horrifying diseases of its early years, years which can be compared — I want to believe so — with the awkward age, with the hell of adolescence, “the desert of boyhood” as Tolstoy called it. This is the serious trial for any growing system.

So it happened that the USA avoided all the tribulations of in its early period, and is dealing with it now, when it is growing old and is not as flexible as Russia. Maybe America is too rigid for this test now. We have the dreadful experience of Germany, which barely survive this cancer of national spirit. Germany couldn’t overcome fascism. Most of the population believed in Hitler’s doctrine, and never could change their minds. They had to live the rest of their lives in the strange half-conscious state which never was conceptualized seriously, even in Grass’s and Böll’s novels (“Most Germans hate Grass because he was always chafing the sore but couldn’t cure it – a pleasure for very few,” said one of my American students born in Bonn). The country we call Germany has nothing in common with the Fatherland of the German spirit, of the Nibelungen, of Nietzsche and of Wagner (and even of Thomas Mann who tried drastically to rebuild German culture – on the same foundations but without Nazis; he didn’t succeed).

Well, institutions and social guarantees, laws and penal codes, bills and benefactors are powerless in the face of  the temptations of mass hysteria and the dictatorship of the “mediocracy” which we see in Trump’s times. For such poisons like the hysterical search for an outer enemy or for the simplest and “most natural” values of the majority, there is no antidote. Democracy doesn’t help, litigation is useless, national unity is crushed.  Common people still prefer to be common and continue to be afraid of any complications. “Common” is not the scornful moniker invented by the highbrow professors. It turns out to be a proud self-definition. The pleasure of being simple — and even being consciously nasty — is the strongest emotion in the process of growing up, and it is as inevitable as sexual lust or aggression. Real and literal teenagers shoot their classmates, which is also an American national disease; adult “teenagers” vote for Trump, and Trump is not the only example of this belated adolescence. When all the nation synchronously condemns Harvey Weinstein,  and there is no single voice who could destroy this glorious unison, this is the same kind of fascism: because the foundation of the American national myth always was the ability of a single weak individual to oppose the screaming tribe. But no one can oppose that tribe right now in America; no any single voice breaks the choir of wrathful philistines who have no opinion but just feel the trend.

What about Russia? Russia has immunity to fascism. We have thousands of fascists but no fascism because today, our country is not ideological at all. Nobody believes in any doctrine, nobody is really devoted to the powers that be. Trump has a 25% popularity rating in the US, and Putin has officially about 85%: but there are many, many more sincere Trumpists in the US than there are honest Putinists in Russia. During all shock and convulsion of history, Americans unite around the leader; Russians are never united except in situations of the utmost danger — which once confronted, become their warmest memories. In all other cases they look at their leaders with a kind of schadenfreude: “Well, well.” The day after Putin’s fall, all of Russia will claim that he was the only reason for all our troubles, but Trump will keep some fans even after he starts World War III.

We are looking at America now, just as the hero of H.G. Wells’ novel “The War of the Worlds” looked at the mighty Martian intruders who were eventually destroyed by the influenza virus. Russians believe the US will survive. We are happy that Americans are still humane — in spite of their technical progress and their geographical exclusiveness. We’ll watch to see how they oppose the diseases which Russia never cured entirely, but learned to live with. 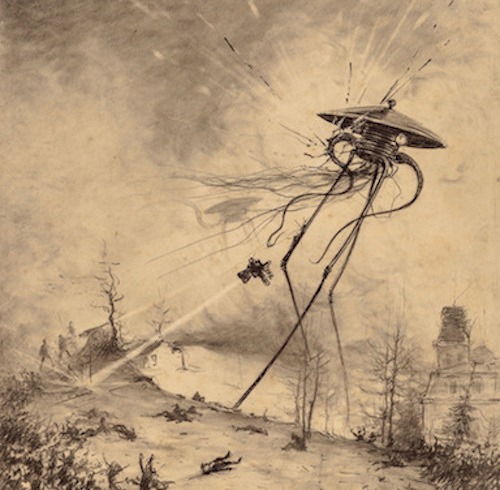