As the window for meaningful action closes in on too little too late, we have a brief moment to contemplate the scope of the disaster. Not just the time we have left — or what’s left of the world after we’ve squandered all this time — but our literal shortsightedness.

Beyond politics and science denial, climate change communication stumbles on the scale of the evidence: the numbers are too large or too small; the pace is too slow, the substances (methane, CO2) invisible. ­Just try and picture “parts per million” of an invisible substance. Even believers can’t see it.

Climate change demands a shift in how we see the world. We’re not missing what’s in front of our noses, but what’s literally over our heads and beneath our feet. This is the deep time and deep space of the atmosphere and the underground, repositories of our air, our water, our energy, and our many faults. These new landscapes, the overscape and the underscape, reveal the time embedded deep within the earth and scattered by the winds. An honest portrait of Los Angeles during this period of fire and drought demands a vertical format to frame our dwindling aquifer and particulate-laden atmosphere.

UnderLA, a collaboration with Refik Anadol, projected the Los Angeles aquifer onto the banks of the Los Angeles River. The work was shown during CURRENT:LA, a citywide festival commissioned by the City of Los Angeles. The video, which pans through soil samples from a USGS well monitoring site in downtown LA, descends through ancient layers of silt, sand and clay. It may not look water, but this rolling rockscape forms the critical body of water supporting Los Angeles.

88 Cores is a four and a half hour video descent through 3000 meters of the Greenland Ice Sheet. It is a time machine through 110,000 years of climate history. Ice cores are known as paleo-thermometers; seasonal snowfall, gradually, over the years — tens of thousands of years — is compressed into banded layers of ice. These bands can be counted and dated, like tree rings. The ancient snow was infused with pollen, pollutants and ash, preserving as it fell, the debris from flowers and fires, Roman foundries, and volcanic eruptions. Air bubbles trapped within the ice hold ancient air, providing an accounting of ancient atmosphere. This frozen history informs our heated future.

A half century ago, NASA’s Blue Marble, the iconic image of the earth from space was widely credited with galvanizing a “Whole Earth” environmental movement. The Blue Marble is a third person narrative; we are situated on the outside gazing through the colorless vacuum of space AT a faraway distant planet. To communicate climate change effectively, we must pivot to first person; this is our story, we are living off the generosity of this planet, which, unlike us, has all the time in the world.

Peggy Weil is an artist living in Los Angeles. She will be exhibiting prints from 88 Cores in the Viewpoint Gallery at UCI in conjunction with the UCI’s “Fire and Ice: The Shifting Narratives of Climate Change” conference on view from Jan 29th – Feb 8th. 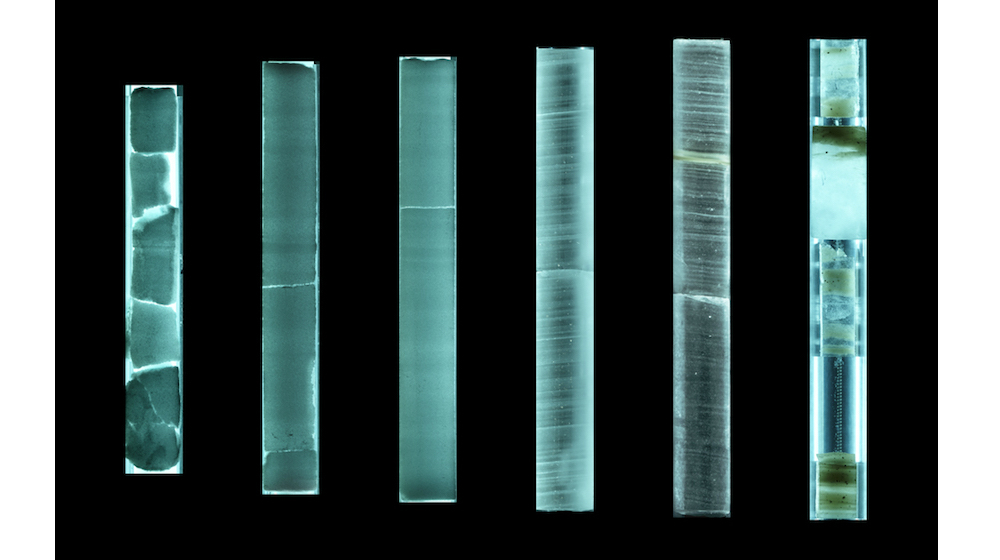