Today, in popular English discourse, a forum is a place for exchanging ideas, and it is this sense of the word that informs one of our earliest metaphors for the internet. It seems important to remember that the historic Roman Forum, beautiful as it was architecturally, was first and foremost a place for state and commercial affairs, a center in the Western ancient world not for everyday people but for those with power. It’s a fitting metaphor for the internet, in that regard, and for the steadily expanding influence of artificial intelligence in our daily lives.

In a recent essay for Nieman Lab, I observed:

It’s easy, in the popular imagination, to think of the historic Forum as a place for civil discourse, where new ideas manifest through informed and structured debate. Civil matters were indeed discussed in the Forum, but not always in civil ways. Fights broke out. Heads literally rolled — and were then pinned to the walls. This was generally not a place for women or non-Roman men, excepting the occasional slave or Vestal Virgin. It’s where Augustus and countless emperors innovated with new forms of propaganda, where rumors flew quickly, fights and arguments erupted, and graffiti told the people’s thoughts in their rawest form. And just outside the Forum, bathrooms and sewers would have been major vectors for disease.

As a symbol of power and site of wealth, the Forum was regularly sacked and, with the decline of Roman civilization, ultimately dismantled by competing powers. New fora were built in places like Constantinople to reflect and project new power centers in the ancient world, while the historic Forum itself eventually became known as a campo vacino, or cow field.

The Forum is a reminder that great feats of engineering are not simply innovation stories — they are stories of projecting power. From the Bronze Age through to today, civilizations that have shown technological sophistication have inspired the most awe amongst their people and other civilizations. “Without proper care,” I wrote, “public spaces like the Roman Forum… can readily become places of exclusion, rumor, disease, politicking, exploitation, and open violence as they steadily approach entropy.”

Sound familiar? Welcome to the contemporary forum that we call the internet. Thanks to artificial intelligence and other technological advances, we increasingly are unable to escape it.

The past few decades of digital technology have seen a steady expansion outward, from niche usage to daily usage to essential usage. The earliest internet gave us the idea that we could connect two computers and exchange information. We then created social exchange systems like Usenet, email, and telnet, and then more centralized social media on the web. With the decreased cost of computers and the rise of smartphones, the internet steadily became something interpersonal and cultural, and not just informational. Technologies like Couchsurfing and Craigslist, followed by more app-ified services like Didi and Airbnb, allowed us to interconnect our offline lives with our online ones through more radical notions of trust.

This newest era of technology gives us the idea of the power of automation in our daily lives. Fundamentally, I see artificial intelligence as part of a larger series of technological megatrends affecting society faster than our notions of ethics, power, policy, rights, and law have been able to keep up. These trends include the mobile internet, connected objects (aka “the internet of things”), and biotechnology, and they are advancing in a world where US senators are still wrapping their heads around Facebook’s business model.

Security cameras in the street and autonomous vehicles on our streets are the most evocative examples of how our digital forums extend into our physical ones. The world has yet to achieve consensus on rights to be forgotten and rights to privacy on digital platforms, while already, in many cities and borders, it is steadily becoming impossible to opt out of being digitized at all.  Where once the digital forum existed in the cloud, it now works increasingly in the streets, entering our physical spaces and bodies through surveillance and facial recognition, self-driving cars, drones, smart home devices, body augmentation, and as-yet-to-be-imagined technologies.

But this forum also appears in less obvious places. Take, for instance, labor, which was critical to how the streets of Rome were built. Today, artificial intelligence is often heralded as magic, and meanwhile, everything from our voice commands with Siri and Alexa to images of highways and roads are subject to invisibilized human auditing and labor. This type of work is a source of livelihood for many people, whether or not they care to use the internet. New York Times reporter Cade Metz observed the reality of this economy:

One day, who knows when, artificial intelligence could hollow out the job market. But for now, it is generating relatively low-paying jobs. The market for data labeling passed $500 million in 2018 and it will reach $1.2 billion by 2023, according to the research firm Cognilytica. This kind of work, the study showed, accounted for 80 percent of the time spent building A.I. technology.

Is the work exploitative? It depends on where you live and what you’re working on. In India, it is a ticket to the middle class. In New Orleans, it’s a decent enough job. For someone working as an independent contractor, it is often a dead end.

According to legend, Rome’s founders — Romulus and Remus — received divine blessing to begin the nascent Roman Kingdom. But there was no magic: the city and broader civilization were built, brick by brick, stone by stone, by people and organized communities. Today, everything behind our magical technologies, from online searches to self-driving cars, requires paying — or underpaying — people to go through the arduous work of clicking, annotating, auditing, and evaluating everything from images to text ranks. There is engineering magic, but there is also labor, and the quality of this labor shapes the performance and safety of the engineering.

And then, of course, there is power. The battle for dominance in AI is a particularly potent issue in our geopolitical era, wrapped in Cold War-esque narratives around nationalism and security. Like the internet, there is not one AI, but many; not one AI policy, but a multitude. Countries, regional powers and even cities around the world are releasing their own studies and policy proposals on artificial intelligence, while major companies in the US, the EU and China are pushing for new innovations that will establish themselves as leaders in the field.

Meanwhile, people in emerging economies in Latin America, Southeast Asia, Sub-Saharan Africa, and other regions have limited say in these developments. With AI shaping everything from criminal justice to urban planning to the medical system, it’s clear that this next wave of technology requires new developments in law, ethics, policy, rights and governance. What’s less clear is if society as a whole can keep up with the changes, or if a global, equitable consensus will even be possible.

Today, we are seeing an age-old competition to shape the public space writ large, at the scale of the world, rather than a regional empire; at the speed of data, rather than the speed of cavalry and navies; and with nation states intermixing with multinationals whose powers often bypass those of governments. In an article for Foreign Policy, Sean McDonald and I observed that, “while much attention is paid to a tripartite technology world of the United States, China, and the EU, smaller initiatives abound: At the same time as states are navigating sovereign relationships, nearly every country is also wrestling with domestically defining and balancing state and political power.”

It’s tempting to think of this moment in technological history as one solely of engineering, but it is also one of power and society. The problems we’ve left unchecked and unnegotiated in our digital forums are now, thanks in part to AI, spilling over into our physical streets and plazas. Like urban infrastructure, we must contend with it and expect contention. And as with any negotiation of power, we should expect heads to roll, diseases to spread and rumors and propaganda to proliferate.

“I found Rome a city of bricks and left it a city of marble,” said Caesar August. He was right, of course — the engineering projects he sponsored were the pinnacle of the ancient West. He was also ruthless and unforgiving, and his structures of marble entombed the final days of the Roman Republic while projecting the empire’s power farther out than previously thought possible.

Today, digital technology’s reach into our daily lives extends in new ways with the help of artificial intelligence, and these advances are shaped in part by larger geopolitical shifts we’re seeing in the world. We once had to log into our digital forum; increasingly, it is no longer possible to ever truly log out. If we’re lucky, we’ll find something beautiful on the other side.

An Xiao Mina is the author of Memes to Movements: How the World’s Most Viral Media Is Changing Social Protest and Power. 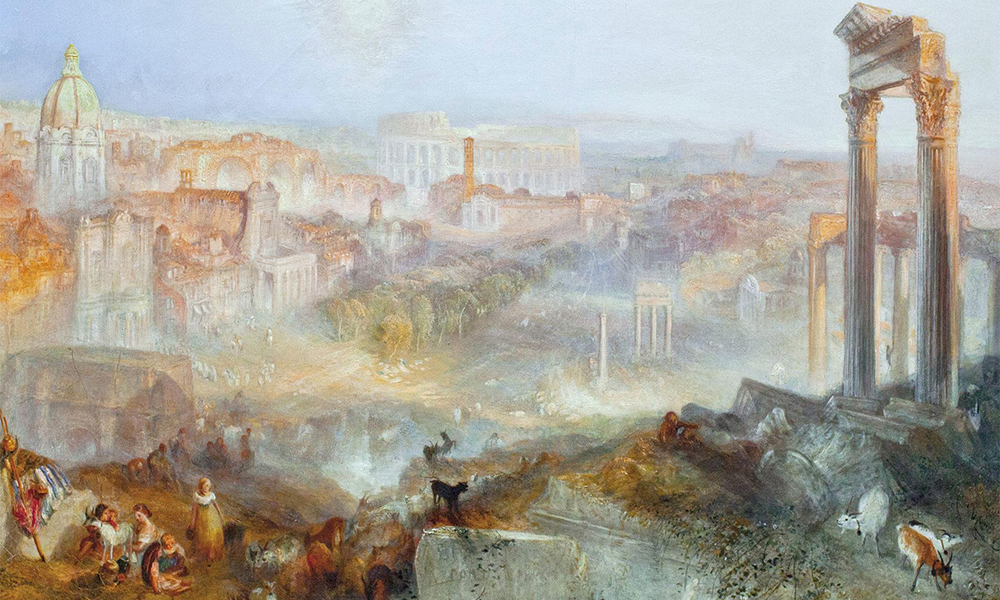