Sometime in mid-2019 a police officer tapped a student who had been studying at a university on the West Coast of the United States on the shoulder. The student, who asked me to call her Anni (安妮), after the famous Dutch-Jewish diarist Anne Frank, didn’t notice the tapping at first because she was listening to music through her ear buds. Speaking in Chinese, Anni’s native language, the police officer motioned her into a nearby People’s Convenience Police Station. On a monitor in the boxy gray building, she saw her face surrounded by a yellow square. On other screens she saw pedestrians walking down the street, their faces surrounded by green squares. Beside the high definition video still of her face, her personal data appeared in a black text box. It said that she was Hui, a member of a Chinese Muslim group, and that she was a “converted” or rehabilitated former detainee. The yellow square indicated that she had once again been deemed a “pre-criminal.” Anni said at that moment she felt as though she could hardly breathe.

Anni was in her hometown in Northwest China, in the Xinjiang Uyghur Autonomous Region. She had been trapped there since 2017, when — in the middle of her junior year at university, which is located in the United States — she had taken a spur-of-the-moment trip back home to see her boyfriend, her former elementary school classmate. Her ordeal began after a night at a movie theater in Ürümchi, a city of 3.5 million several hours from her home, when her boyfriend received a call asking him to come to a local police station. At the station, they told him they needed to question his girlfriend. They said they had discovered some suspicious activity in Anni’s internet usage. She had used a Virtual Proxy Network in order to access “illegal websites,” such as her university Gmail account. This, they told her, was a “sign of religious extremism.”

For the next several months, Anni was held with 11 other Muslim minority women in a second-floor cell in a former police station. Others in the room were also guilty of cyber pre-crimes. A Kazakh woman had installed WhatsApp on her phone in order to contact business partners in Kazakhstan. A Uyghur woman who sold smartphones at a bazaar had allowed multiple customers to register their SIM cards using her ID card.

The guards told her that she was not in jail, but rather at a center for life transformation and vocational training. Like as many as 1.8 million other Muslim women and men she had been sent to a “reeducation camp.” Camera and audio recording systems monitored detainee movements, preventing them from sitting on their beds except during prescribed sleep time and speaking anything other than Chinese. During the day they were only permitted to stand or sit on plastic stools while they watch “reeducation” TV programs on a monitor mounted on the wall. Anni said, “the most terrifying thing about being there was not knowing if you would ever be released.”

After several months, as the facilities became more and more crowded, Anni and several other students were released on the provision that they report to local social stability officers on a regular basis and not try to leave their home neighborhoods. Every Monday Anni was required to go to a neighborhood flag-raising ceremony and participate loudly in singing the Chinese national anthem.

After she was back in her neighborhood, she felt that she had changed. She said her time in the camp made her think, “Maybe I don’t love my country enough. Maybe I only thought about myself. Maybe I wasn’t careful enough. We all started to think about this. Maybe I didn’t help the Party and the country. I just helped my family. I didn’t take my responsibility.” Whenever the social stability officer assigned to her share something on WeChat, Anni was always the first person to support her by liking it and posting it on her own social media wall.

But, she said, she also knew that what had happened to her was not her fault. It was the result of Islamophobia being institutionalized and focused on her. Although she could pass as Han, she now always thought, “What if…?” Her father told her, “If you see someone fighting on the street, you can’t stop to watch. If they check your ID, you will be detained again. If you see a car accident, leave it alone. Just go. You are not like a normal person. You are now one of ‘those’ people.”

She noticed that her father was also more careful. Before, he would argue with the local social stability officers. Now he always greeted them effusively. During their visits to monitor her progress, he always made tea and food for them. She said, “He always agreed with them. He told them ‘studying was good for me.’”

Yet, as the months wore on, she began to find ways around the many checkpoints. Since she could pass as Han and spoke standard Mandarin, she would simply tell the security workers that she forgot her ID and would write down a fake number. Or sometimes she would go through the exit of the checkpoint, “the green lane,” just like a Han person.

It wasn’t until the police officer tapped her on the shoulder and waved her into the station that she realized that the face scan that the police had taken right before placing her in the camp could be used to detect her movements. She had been caught walking down streets where she was no longer permitted to go. Back at the People’s Convenience Police Station, the officer filed a report and let her go. She was just given a warning.

In October, Anni’s probation officer told her that she was happy with her progress and she would be allowed to continue her education back at her university. She was made to sign vows not to talk about what she had experienced. She said, “Your father has a good job and will soon reach retirement age. Remember this.”

Back in the United States, at her university, Anni feels a bit lost. All of her friends, most of whom are also Chinese international students from China, have graduated and moved on. There is a blank spot in her young life. She tells herself over and over: “There is no reason for this. It is random. There is no reason.”

She has begun conversations with a therapist who specializes in the trauma of Holocaust survivors. She has begun new friendships with Uyghurs and Kazakhs whose family members have also been affected by the camp system.

She is troubled by the lack of support she received from her university. Aside from some good wishes, they did little to intervene on her behalf. They still asked her to pay tuition for the quarter that was interrupted by her detention.

Students like Anni are beginning to demand that their institutions do more to protect them. At UCLA, a group of students is organizing college students across the University of California system to divest from the technology companies that benefit from the digital and biometric surveillance systems that targeted Anni and millions of other Muslim minorities. They understand that from Western Digital’s involvement in Xinjiang to Microsoft’s involvement in the West Bank, Muslims around the world are disproportionately affected by involuntary surveillance systems. The global discourse of the war on terror affects all of them.

Anni’s story shows that the minds of people cannot easily be transformed by such systems. Although the gaslighting she experienced in the camps did make her begin to question her culpability, once she was released, she quickly began to understand the deep injustice that had been done to her and many others. While the stated goal of the system was to train her to think differently, she said she didn’t really learn anything other than there was no real justice for people who were seen as different and dangerous.

The surveillance system did not change her fundamental sense of reality, or “wash clean their brain” as government documents describe the system goals. While it did make her adapt her behavior, this change was slight compared to the experiences of millions of Uyghurs and Kazakhs who did not possess her relative ethno-racial and class privilege. As a Han-passing, college-educated speaker of Chinese, she was able to navigate the system in ways that are not available to millions of Uyghurs and Kazakhs. She said one of the deepest effects of the system was that she no longer felt as though she could trust other people nor could she rely on government to protect her.

Reeducation through coercive surveillance and detention cannot fully achieve what it is designed to achieve, because people know their own history. They know when a “never again moment” is happening. Uyghurs from Southern Xinjiang remember what life was like in the 1980s and 1990s before millions of Han settlers arrived to occupy and develop their homeland. Many Kazakhs remember the freedom they felt when they visited Kazakhstan for the first time. Today, Anni remembers that during her first days in the transformation center, a place she refers to as a “concentration camp,” she whispered the stories she had read about the Holocaust and the Cultural Revolution to her fellow detainees. She told them that “what is happening to us is just like what happened to Anne Frank.”

Darren Byler is a postdoctoral researcher at the University of Colorado, Boulder. He is the author of a forthcoming book on technologies of reeducation in China and around the world for the series Columbia Global Reports.

Photo above by the author. A People’s Convenience Police Station in Ürümchi in 2018. 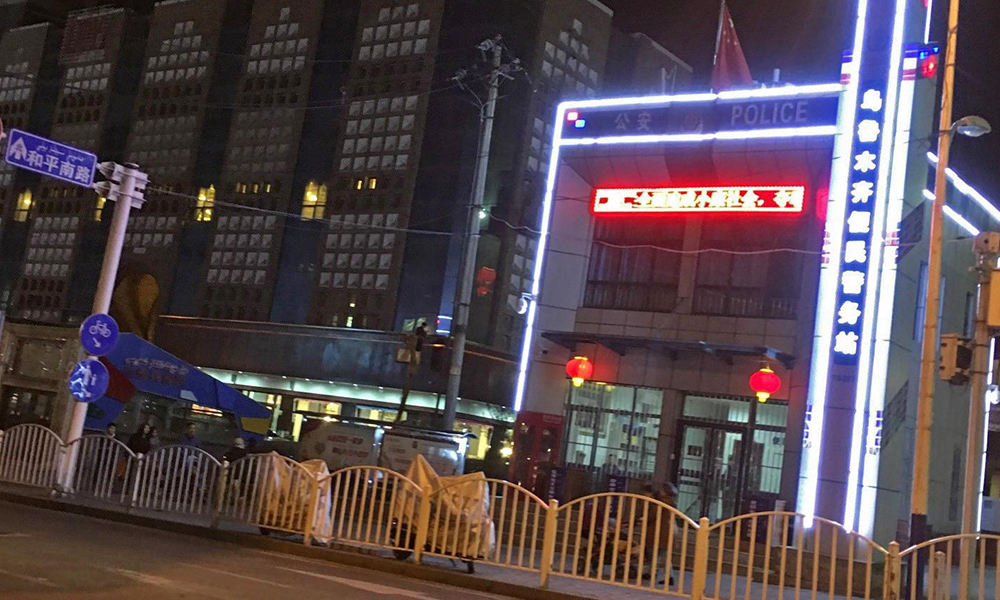