This is the second in a series of “Provocations,” produced in conjunction with “What Cannot Be Said: Freedom of Expression in a Changing World” a conference cosponsored by UCI, USC, and UCLA (January 22 -24, 2016), scheduled to coincide with the first anniversary of the Charlie Hebdo attacks in Paris. All contributors are also participants in the conference. If you feel provoked, please add a comment.

My provocation will take the form of a self-criticism. I want to come clean about an incident that haunts me, which found me altering my plans for publishing a commentary due to concern over possible repercussions. Aware that I am a China specialist, you might think you know where this is heading, especially given the intentionally misleading title I’ve chosen for this piece. I’m not, though, going to confess to an act self-censorship carried out due to wanting to maximize my odds of continuing to get visas to go to the Chinese mainland. Instead, I’ll describe a time that I worried about how people living on this side of the Pacific would respond to a U.S.-China comparison that I was convinced some Americans would not appreciate.

Let me begin, though, with the issue of my not being banned by Beijing, since colleagues and friends periodically express surprise that I keep being able to get PRC visas. This is natural. They’ve heard that some people in my field have had trouble getting them. They know I’m interested in hot button topics, such as the events of 1989, which Beijing’s leaders think should be avoided or talked about only in very circumscribed ways. This leads to them to make some or all of the following assumptions about me:

When I explain all this, some people leap to two erroneous conclusions. One is that I am brave (not particularly). Another is that the Chinese authorities are unaware of what I write and say (not true). The reality is I can’t be considered courageous in the way I write about China precisely because I am not worried about being banned. Even if I were permanently denied access to the mainland, I could do just fine, given my career stage, field, and aspirations. I am a tenured professor; I have no desire to become a high level administrator; and I have books planned that could be written without visas. I’d be showing more bravery if I did what I did and was untenured, had a research agenda for which traveling to China was crucial, or longed to be considered for an administrative post for which — and I can think of several — being unable to travel to Beijing might be seen as problematic.

In addition to all this, it is not courageous of me to write what I have so far in this essay, even though doing so has called attention to my disregard for the Chinese government’s druthers. The Chinese authorities definitely know about my interest in taboo topics and use of verboten terms — Beijing certainly keeps track, for example, of who testifies at the Congressional-Executive Commission on China, which focuses on the human rights situation in the PRC and holds sessions that are open and filmed and documented via published transcripts. I spoke before that group in 2014 and referred, per usual, to what had happened twenty-five years before as the “June 4th Massacre” not the “Tiananmen Incident,” and to the official version of events as part of a “Big Lie” campaign. My last visa application was made after I gave my testimony — and was successful.

Some might interpret all this as meaning that the Chinese authorities aren’t as strict when it comes to visas as some imagine them to be, or that the process is simply very hard to figure out and quirky. My own sense — since I keep getting visas while some people, including a few of the contributors to that Xinjiang volume, have gotten banned despite crossing fewer lines than I have — is that both these things are true. They aren’t as heavy-handed as we sometimes think and it is a mysterious system.

I do self-censor when giving public talks on the Chinese mainland, choosing my words carefully and avoiding some controversial subjects completely, but I do not do so out of fear or for self-protection. What leads me to hold my tongue when I give talks (except in very special and not-quite-public settings, such as at schools affiliated with Western institutions where international academic freedom rules are supposed to apply, and where only those with certain kinds of I.D. cards can get in the door) is the concern that venturing into taboo territory might cause significant problems for others. I don’t want to risk making trouble for friends who live in the cities where I am presenting, or for people I don’t know well who have invited me to give talks on their campuses.

Those moments of self-censorship don’t bother me, but one time I limited publicizing my views here, on my native soil, gnaws at me. In the immediate wake of 9/11, I became disturbed by how much the public sphere in the United States had started to resemble that of China during a political campaign, with all the main newspapers seemingly following the same basic line and newscasters breaking with standard norms of objectivity by using the first person plural, talking about how “we” felt and how “we” needed to respond. Things came to a head when my nine-year old daughter told me about a class session spent drawing American flags, in a manner uncomfortably reminiscent of what might happen during a Chinese “patriotic education” drive.

I became obsessed with wanting to find a way to respond to this. I first thought of trying to start a campaign to get schools to encourage students to draw the flags of the dozens of countries from which those who died in the Twin Towers had come or to which they had ties.

Then I reconsidered and concluded that the best thing I could do was write an essay about how much I had always valued the sense I had when I came back from the PRC of feeling that I was some place where there was a more robust public sphere. I would describe how unsettling it was to have China flashbacks in my own country. I would also note that, while some diversity of opinion and space for disagreement soon returned to the American public sphere, the response to the terror attacks was a useful reminder of its fragility.

What I didn’t do was send the essay to an American periodical, even though there were one or two I had written for before that might have wanted to run it. This was because, in my first enthusiasm for the flags-of-many-nations idea, I had called the homes of two people who had written bold essays critical of the groupthink and jingoistic tone of the moment. I did not know either personally, but I had friends who did, and who had forwarded their numbers. They were worried by my call — the pieces I admired had inspired angry responses and personal threats, and being rung out of the blue by someone else the authors didn’t know was disturbing.

The main points of my piece were reinforced rather than challenged by those phone calls and underscored the potential value of sharing my views with Americans. I decided, though, not to try to place it in a domestic publication where, arguably, it could have done the most good. Instead, I sent it to an Australian magazine where, as the web had not yet really taken off and social media had not yet been invented, I could be confident it would not come to the attention of many of my compatriots.

I rationalized this choice in two ways. It wouldn’t be fair, I told myself, to open up members of my family to the kind of hostile responses those writers and their families experienced. And a foreign publication might be particularly interested in the essay, since it would offer a look at two settings that might seem intriguingly exotic: China in campaign mode and the United States in a moment of crisis. Neither of these rationalizations was completely off base: there could have been some sort of negative fall out for family members, especially perhaps for my daughter if I had led with the vignette about her classroom, and the Australian editor I sent the piece to immediately accepted it. In spite of this, and the fact that years later I included a version of the essay in a book published in the United States, I’ve always wondered if I made the right initial decision.

That remains a particularly distressing instance of holding back, but there have been others. In fact, I wrestled with a “can this be said without negative consequences” issue while writing this piece. In an earlier draft, I wrote that I’d feel differently about visa issues if I had been born in or had familial ties to China. This seemed at first a natural point to make, since I’m quite sure I’d assess risks differently if I thought that being banned would mean not being able to see a parent or, if my spouse were Chinese, the grandparents of my children. I decided, however, to leave that part out, lest it be misconstrued as implying that I thought colleagues who are Chinese or have partners of Chinese descent are more prone than I am to self-censorship. I’ve been mildly annoyed when people have presumed that, since I keep getting visas, I must pull my punches when dealing with human rights issues. I could imagine being much more annoyed if someone seemed to be suggesting that my background or that of my partner led me to bite my tongue. So, not wanting to cause offense or be seen as somehow bigoted, I left that whole part out.

At least, though, I didn’t wait years this time before mentioning the choice I made.

Jeffrey Wasserstrom is Chancellor’s Professor of History at the University of California, Irvine, the author of books such as China in the 21st Century: What Everyone Needs to Know (Oxford University Press, 2010), and the co-editor of Chinese Characters: Profiles of Fast-Changing Lives in a Fast-Changing Land (University of California Press, 2012). He will participate in the Freedom of Expression in a Changing World: What Cannot Be Said conference. 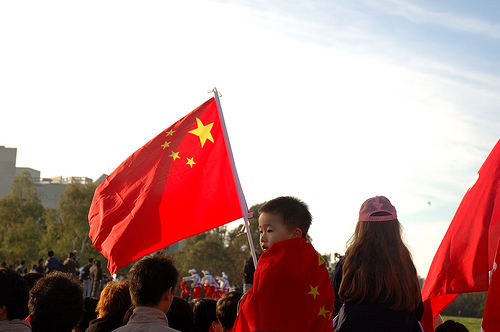