Rilke, that beacon-poet for the anglophone world ever since W.H. Auden took up his cause, was in his early 30s and living in Paris when he wrote “Archaischer Torso Apollos” (“Archaic Torso of Apollo”) in 1908. For a time he had been in the employ of August Rodin, the celebrated French sculptor (as his personal assistant), and the book of poems containing “Archaischer Torso Apollos” (Neue Gedichte, part 2) is dedicated to Rodin. There is general agreement that the aging sculptor, a creative titan revered by young artists from all across Europe, exercised a peculiarly potent influence on the Prague-born, culturally German poet — who was always on the lookout for an adequate father-figure (while being even more into mother-figures).

Critics have suggested that Rilke was inspired by the Belvedere Torso or by some truncated piece of ancient classical sculpture in the Louvre. But maybe they are barking up the wrong tree. Because online photos showing Rodin’s studio never seem to lack for figures à la antique with missing heads or limbs. Critics also stress the role of light and its emanations in “Archaischer Torso Apollos”; how the missing eye-beams are now mysteriously causing what is left of the figure of the god to pulsate like a star. But couldn’t Rilke be working through his relationship with an overly powerful earthling (Rodin) who is easier to handle now that his head has been lopped off? And when the torso says, “You must change your life,” it may be a dismissal — by Rilke of himself. For in the end it is Rilke who engineers the whole business. Is he not telling himself that he absolutely must, once and for all, wean himself from the other’s influence? Unconsciously, of course.

A great many people have ventured to translate this remarkable poem. So many, in fact, that coming up with your own version would seem a rite of passage for practitioners of what is currently the most fashionable of the dark arts. As might be expected, vast differences mark the sundry English renderings. A quick survey can even leave you feeling that you are dealing here with a verbal Rorschach (four recent versions may be conveniently consulted online, at Sporkworld.org). Nowadays few translators are inclined to brave the challenge of reproducing Rilke’s form by casting their effort as a quasi-Petrarchan sonnet in rhyming iambic pentameter. Most, myself included, opt for conversational English-language rhythms and incidental internal and end rhymes here and there, while retaining the external shape of two quatrains followed by a pair of tercets.

The real reason for the tremendous range in the English-language responses to “Archaischer Torso Apollos” lies in Rilke’s infinitely tricky diction. Take “zurückgeschraubt” (end of line 4). Modern dictionaries tell us that the word is used informally, and only informally, to mean something like retracted; as for example when we “retract” a hasty opinion. Once upon a time the association was with adjusting (down) the flame of an oil-burning lamp, as the brothers Grimm inform us in their foundational dictionary of the German language. The original sense was still lodged in living memory when Rilke drew on the expression in 1908; though surely he would already be profiting from its latter-day figurative meaning.

Both meanings must be present: For he is confronting a thing even as he invests it with strange, lifelike properties. Rilke manages to be as intimately conversational as he is formal, hence my “dialed down,” which hints at a downward mechanical rotary motion and also conveys the modern sense of pulling in one’s horns (so to speak).

It is a moment that has excited prodigies of invention on the part of us translators; another arrives with lines 6-8:

What can Rilke be after with a “smile” that is somehow in motion towards the private parts — deliberately referred to with the greatest circumspection and reverence? The lines are hard to pin down. I would argue that many translations err by attempting to define what the smile is doing and making the action concrete. Furthermore, any direct mention of the divine genitals (at least one translator has so dared) strikes me as tonally jarring in the extreme. Best to render this place literally, and with a touch of old-time majesty: “no smile could go to that center which bore the begetting” (lines 7-8).

As for the entire sweep of the poem — with its powerful, cumulative movement — and masterful acceleration — one needs to let it happen. An overly vivid and particularized terrain along the way, a cluttering of the incantatory drawn-out utterance of the tercets, will ruin the effect, which only achieves its object with the famous final curt injunction: “Du mußt dein Leben ändern” — “You [you!] must change your life.” Three of the four versions at Sporkworld.org translate this straight, while the fourth (by Don Paterson) supercharges it: “Now change your life.” I prefer it straight.

We never knew his unexampled head
in which the eyes ripened like apples. But
his torso goes on glowing, like a candelabrum,
in which his gaze, merely dialed back, holds

steady and shines. Otherwise, the curve
of the chest could not blind you and in the
slight swerve of the loins no smile could go to
that center which bore the begetting.

Otherwise, this stone would stand here broken
beneath the limpid fall of the shoulders
and would not glisten like the pelt of a tiger;

and would not erupt from all its edges
like a star: For there is no place here that
does not see you. You must change your life. 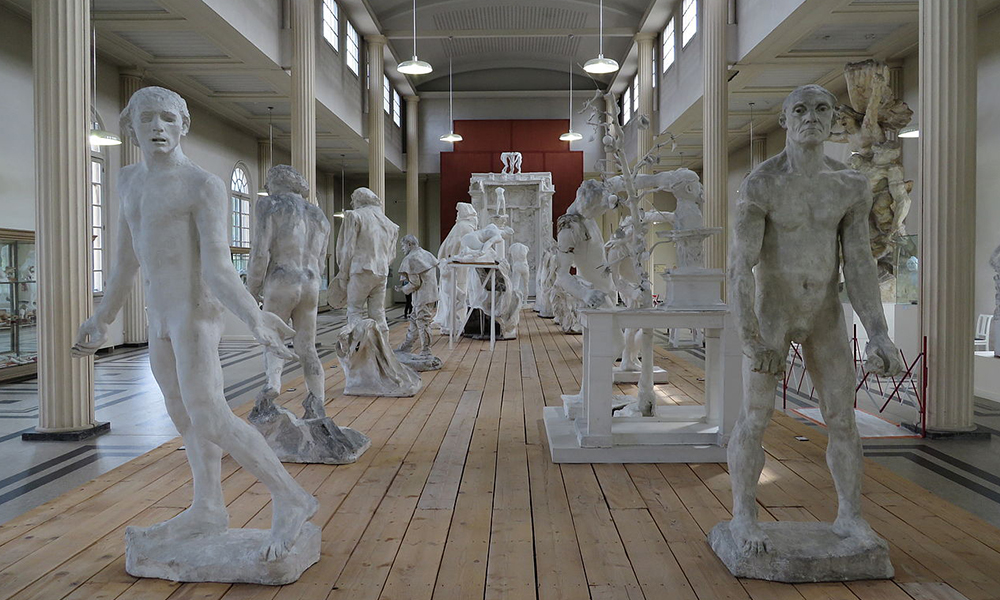