In the opening pages of Claire Marie Stancek’s Oil Spell, as they do throughout the entirety of the book, words spill. This is destructive, violent, and dark, but always self-aware, violence confronted with violence. Words, phrases, and form all clash, dominate, subside and, most importantly, make noise with one another.

Oil Spell comes after Claire Marie’s first poetry book, Mouths, which extends beyond the human and can be classified as a work of Ecocriticism. Oil Spell initially appears to focus on the human and the human capacity for destruction. But the means and consequences of this destruction extend far beyond the immediate grasp of the human. The book sources language from a leaked document about drone strikes, blurring the lines of human agency, and from a measurement of global biodiversity, stretching the boundaries of human impact.

Upon my most recent reading, after closing the book, I found myself troubled by the silence that followed. Claire Marie’s investment in the aurality of poetic language throughout Oil Spell combats the various noises in the everyday, both near and far (seemingly foreign and other), subsuming them into white noise and, in the process, opening up  alternatives beyond the realm of the possible — in a way that only noise can. The poetry in Oil Spell asks for a specific type of listening (and seeing) that one must expand beyond the page and into immediate reality — negating the silence we hear from passive listening. Over email, Claire Marie and I talked more in depth about these ideas of sound, form, and destruction.

PERWANA NAZIF: I’m interested in how you would describe the layout of Oil Spell… I find that the layout of the poems alternate between a duality, a leveling grid, and a sort of wrapping around, movement-inducing form. How did you consider the potential implications of these forms?

CLAIRE MARIE STANCEK: Often I describe this book’s form as an ill mirror: the opening poem invokes a rearranging force that descends on the book like nightfall, as when walking outside at dusk, you witness all the windows on the street become mirrors, reflecting a knotty and angled version of the same street you’re standing on, but with extra branches and cracks, and the ghostly back of an armchair, and a lampshade, or (you can’t discern) maybe the back of a person’s head, all superimposed on one another, all suddenly caught, glancingly, fleetingly, in the light and shade of the pane — so the poems recast one another, the spells spill. The poems in two columns might be read as bad translations, or simultaneous utterances, or mishearings, or equivalences, or oppositions. And the poems that take wrapping, moving shape bend and warp the line, as though pushing away from their own bodies, as though their sounds were keening, unspeakably, away. I still don’t know how to read these poems aloud in a way that communicates what I’m trying to show with form on the page.

Some time ago a very old antique mirror “fell into my hands,” to use Mary Shelley’s words — in its cracked wooden frame was carved a bird in flight, as though escaping from the frame and half mangled by the effort. In whatever room I placed or leant this mirror, it brought along a cloud, something shrouded, half-turned away, in the clouded glass all speckled with grey grains, wavy, warm. I don’t know how to describe the feeling that this mirror brought. But it changed the room where it stood. It breathed. I believe that poetic form is like that: cloudy with the past it carries, remaking by haunting, representing in dusty light whatever room or stanza it recasts with its own strange gleam.

I was particularly struck with the phrase “unhinged mouths” as that was exactly how I imagined seeing myself read the book — fully enunciating each word with an exaggerated mouthing out. The phrase feels loaded, especially when relating it to the power, or the spell, that words, sounds and voicing can cast. Is an unhinged mouth the ideal way to read Oil Spell?

The book is radical in many ways not limited to its focus on spirituality, awakening the political ramifications of passive and active terminology, and the heightening of the sublime in destruction. What kind of spell, or spells, would you say, are being cast in relation to this? Can you describe to us the types of destruction you had in mind when writing the poem?

This book foregrounds, on many different levels, language’s capacity to act: the spell is a speech act which is related to, and sometimes interchangeable with, the poem. Beyond the spell, other spellings: the news, the report, the language of machines. Late in the book, a poem called “r. i. o. t. of” considers how news language can obscure agency, as in the violent cliché (intended to obscure violence), “officer-involved shooting.” The US drone war, which is a subject of many of the poems in this book, demands that we think differently about what kind of activity or passivity might constitute violence. Barack Obama bragged that he could expand the drone war without putting any American feet on foreign soil. I was writing these poems under the shadow of those words, which to my ear invite a radical complicity: what does it mean, in this world, to partake in such a war? What does it mean to murder from thousands of miles away? The act of reading news reports, the act of bombing, the act of condoning a war that, to an American imaginary, might seem so distant as to be unreal, are all what I think of as non-active actions, and are all accomplished from a chair in front of a computer screen. I was influenced by Rob Nixon’s idea of “slow violence,” which asks that we come up with a new definition of violence, one that takes into account the incremental, accretive, diffuse, agentless violences that define our contemporary moment, such as climate change, trash, toxic runoff, Agent Orange. I was also influenced by Anne-Lise François’ idea of “recessive action,” as well as Sara Ahmed’s writings about “happiness objects,” “orientation,” and the ways in which objects can organize social structures and expectations.

Was there a logic to which sourced language was incorporated and remixed into the poems?

There are many different logics that connect the sourced language, and I hesitate to impose one reading in a field where there are many. But one way I understand connections between the 19th-century language of the picturesque, scientific descriptions of birds, and news reports of war that run through the book, is that these discourses, in different ways and to different effects, all enact an objectifying removal of what they describe. Writers like Ann Radcliffe were influential in defining a western tradition of description that privileged the tourist’s gaze, the misty distance, the aestheticization of decline and sometimes also of poverty. Likewise, the scientific names for birds, which populate the margins of this book in grayscale, evoke for me the historical connections between scientific inquiry, colonialism, and notions of “progress” which are inextricably linked to environmental degradation and mass extinction. Part of the project of Oil Spell is to follow aesthetic inroads into these discourses of aesthetics, science, and violence, and to consider their complicated intersections.

Can you tell me about any upcoming works or projects?

I’m currently at work on two creative projects: one is a book in prose fragments called wyrd] bird, which brings together writing about loss, mourning, and the medieval mystic, Hildegard von Bingen; and the other is a book of poetry to which I’ve been giving the placeholder-title Religio Medici and Urne-Buriall — after the essays by Thomas Browne — and which performs an ecstatic reading of those essays, alongside more writing about saints. I’m also working on some academic writing: I recently completed my PhD at UC Berkeley, and am adapting the final chapter of my dissertation into an article about Emily Dickinson and sonic vibrations. 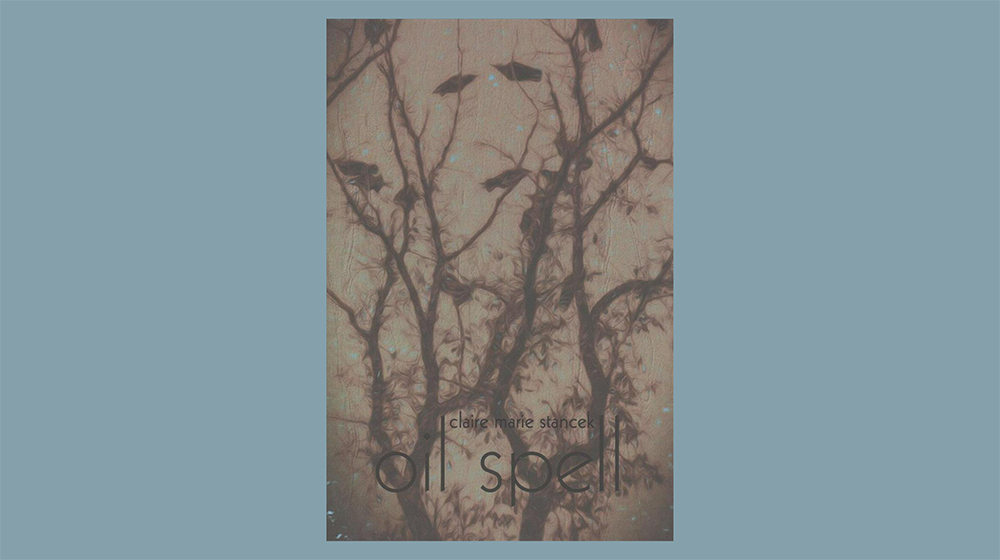