If you type Etel Adnan’s name into Google — in Arabic or English or French — you won’t find a single picture of the poet in her youth. Even if you type “Etel Adnan young,” you will only see results from her later years. Among these is a black and white picture of an elder Etel, her face partially covered with a flower, like an Ottoman girl preparing to transcend time. 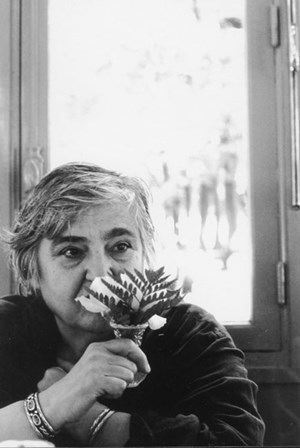 Throughout Etel’s literary and artistic career, which has lasted over six decades, she has constantly endeavored to deconstruct questions of language. This quest has its roots in her family history; whenever she is asked about Arabic, she refers to her parents’ house in Beirut, and recalls her Greek mother and Syrian father, who met through the Turkish language. Etel’s father was born in Damascus and later joined the Ottoman army, where he learned German and French. In her testimony “To Write in a Foreign Language,” Etel recalls her father’s attempts to teach her Arabic and explains how the many languages in her life often changed based on location: Turkish and Greek at home, French in school, Arabic in the streets. Etel says that her father spoke to her mother in Turkish, but during the wars he would write her romantic letters in French. In this way, French became the language with which Etel would battle the world.

Etel describes the Arabic language as her “paradise that is forever lost.” She often speaks about Arabic in terms of neglect and regret — perhaps even vindication — but she doesn’t allow these terms to overshadow her positive and more subversive relationships with the language. In her many attempts to return to and reclaim Arabic, she disrupts the necessity of language and its essentiality to literature and the litterateur.  Etel deals with language as a political and artistic idea; it can be a dystopian poem that thinks in Arabic but is written in French, and it can also be a visual appropriation of words, and a constant act of translation from self to text to readers.

In a 1985 interview with Hilary Kilpatrick, Etel references a Syrian poet who described Etel as the most important Arab poetess since al-Khansa’a. In considering her place within the field of Arabic literature, Etel discloses her fear that this position of celebrity is conditioned upon her own distance from the language, and that she may be stripped of her “Arabic poet” label for that reason. Etel has left the Arab world in the 1950’s, once making an attempt to return home when Lebanon was still undergoing a civil war. Her poetry, her art, and her critiques of dictatorships at home and imperialism on the frontiers have become her way to keep a location pinned in the map of Arabic poetry.

Etel Adnan did not simply enter the Arabic language from any door; her first translators were themselves the modernizers of Arabic poetry like Yusuf al-Khal, Saadi Yousef, and Sargon Boulus. I first learned of Etel’s poetry through Sargon’s translation of There: In the Light and the Darkness of the Self and of the Other, which was published by the Iraqi-German publishing house al-Jamal in 2000 — the book was one of many beautiful gifts that Sargon Boulus has given the world. I began to trace Etel’s path, and found two more works of hers in Arabic translation that were published by a Lebanese press called “Amwaj” (Waves). In her work, I found a poetic lightness and a charming flexibility, as well as a vivid relationship with the spatial experience, an attempt to render the physicality of language that reemerges in her later work, in more concrete terms. I did not speak English at the time, and the internet was not so full of treasures as it is now. But today, once again, I find myself searching for Etel, hoping to read into the possibilities of language that exist for a multilingual litterateur as she swings between locations.

Sargon met Etel in San Francisco, the city where Etel became an American poet in the movement of Anti-Vietnam War poets, when he arrived there at the age of 25. Her migration to America was like a “small earthquake,” she says, as it made her a politicized poet with long threads across the world. The Anti-Vietnam War movement was not her first political moment; she also experienced the Algerian Revolution in the 1950s and 1960s, which was a central moment for her generation of Francophone writers, as it put many of them in a conflict with the French language. At the time, these writers were searching for a way to “return” to their mother tongues. Some Algerian writers tried writing with standard Arabic, some aspired to write in vernaculars, and others even abandoned literature altogether. However, Etel, like Assia Djebar, searched for a way to reconcile Arabic with French. Assia could not find a way to Arabic, so she couldn’t write for years and instead worked on making films in the mountains — until she ran out of silence and came back with her masterpiece Fantasia, in which she touches on the issue of language. Etel did not dwell long in silence; instead, she found her language in what she called “drawing in Arabic.” She describes her discovery of drawing as that “opening of a side window, as if one morning the sun did not rise where it was expected to rise, but close by, at a different point of the horizon.”

Etel started drawing in Arabic through calligraphy, inciting a revival in this classical Arabic art with her minimalist and “extremely imperfect” handwriting. She found inspiration in the “imagery” of Chinese and Japanese to recreate her Arabic, to step closer to modern Arabic poetry. In “The Unfolding of an Artist’s Book”, Etel talks about the Arabic script as artistic material to mediate thought with. She is most amused by the elasticity of the Arabic script that reflects the “the inherent possibilities of Arabic writing.” It helped her arrive at the realization that “drawing and writing were one.”

Etel mentions the Arabic-Turkish dictionary that her father kept from his days in the military academy, and the transcribing exercises, which he thought would help her learn Arabic. In Bartleby & Co, Enrique Vila-Matas reminds us that the story of Bartleby the scrivener is also one of the stranded writer; through the constant act of repetition, new writings are unlocked. In rendering verses from modern Arabic poetry into abstract lines, the poet embraces the intimate relationship that connects scriveners to language. She recognizes the levels of unfinished translation in writing and drawing, “I did not try to have the poems translated to me, I was satisfied with the strange understanding of them: bits here and there, sentences where I understood but one key word.” Drawing in Arabic confirmed her “suspicion that our mental world is an on ongoing translation.” Her revival of Arabic calligraphy can be considered another example of what she calls her relationship “with the cultural fate of Arabs by indirect ways.”

During the Lebanese Civil War, Etel wrote a long poem called “The Arab Apocalypse,” or “The Arab Day of Judgment,” as Chawqi Abdel-Amir translated it from French. In this text, Etel moves between poetry and hieroglyphic drawing, and investigates the “beginning of the end of the world.” After the French version was published, she rewrote the poem in English and published it with Apollo Press in California, which she had established with her lover, the Syrian sculptor Simone Fattal. Etel seems to live in a permanent state of translation: poetry as a translation of the self, translation as a new writing, and art as a translation of a lost language. In the aforementioned poem, Jalal Toufic finds “an Arabic book of poetry in part because it was withdrawn, occulted by the surpassing disasters that have affected the Arab world.” But Etel sees her poem as “Arab in its logic, as it hurtles towards the epic through a rhythm of scenes based in Beirut but decorated as the universe, like an opera between the galaxy and the cemetery.”

Etel brings forth a new possibility for Arabic literature — by consecrating her personal project in order to serve the Arabic culture — but doesn’t harvest enough credit. Modern Arabic literature is incapable of recognizing the likes of Etel, Abdellatif Laâbi, and Assia Djebar, especially as they belong to a past world — a time when the meaning of the nation-state was not so steeped in nationalism and opposition. Every time anyone would attempt to describe Etel in Arabic, her nationality changed and her foreignness was underlined, for our conditioned imaginary does not know how to take us beyond borders and languages, like Etel does. And thus this Ottoman child shakes up the geography of Arabic literature — its internal borders and its limited ambitions towards the world.

In 60 years of writing and drawing, Etel learned that the mother language is as impossible as the foreign language — just as Derrida testifies in his Monolingualism of the Other. This impossibility is itself a translation of the impossibility of locations; by writing in French and English, the poet translates the distance that separates her from the Arab World, both as a location and an idea; as if she cannot betray that distance. Etel thinks that to answer the question of language is “like trying to hold reflections in one’s hands.” In poetry, she finds her guaranteed location, because “poets are deeply rooted in language and they transcend language.” Then she unlocks her forbidden paradise with these words:

“I have always been part of the here and now. I did not take time out of everyday life to consecrate all my efforts to acquire Arabic as a full language. When the sun is strong and the sea is blue I can’t close my windows and go in and “study” anything. I am a person of the perpetual present. So I stayed “outside”; Arabic remained a forbidden paradise. I am both a stranger and a native to the same land, to the same mother tongue. This [past] century told us too many times to stay alone, to cut all ties, never to look back, to go and conquer the moon: and this is what I did. This is what I do.” 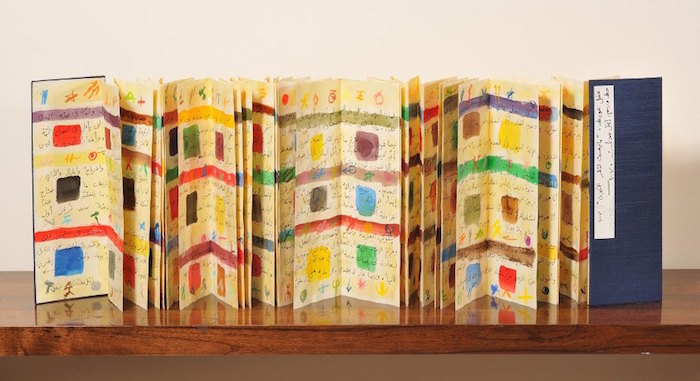