For now, it appears the Republican Senators’ attempt to repeal the Affordable Care Act is dead. But key provisions (like cost-sharing reductions for insurers) remain in doubt, Vice President Pence has said, “We won’t rest until we end […] ObamaCare,” and Trump still wants to sabotage the law.  In July, the vast majority of Republican Senators were prepared to do just that.

At about the same time that Republicans were busy attacking the ACA, Austen fans throughout America (and the world) were celebrating the author’s bicentenary. Few people, I suspect, saw any connection between the subjects. But for an Austen scholar like me there was an eerie overlap. Despite the festivities and media hoopla surrounding it, Austen’s bicentenary marked the anniversary of her death. Her novels satirize people who do not care about other people’s lives. At the end of July, the same seemed true of too many Senate Republicans.

The danger of repealing the ACA was never simply about people losing insurance coverage. It was about how many would suffer or die without it. The final Senate Republican repeal proposal, the so called “skinny” repeal, would have left 16 million people uninsured by 2026. Earlier Republican repeal proposals were especially inhumane. 27 million more poor and low-income Americans would have been without coverage in 2020 and 32 million more without coverage in 2026. Attacks on Medicaid would have put women and children at special risk. The majority of adult Medicaid recipients are women and Medicaid pays for almost half of all American childbirths.

The kind of disregard for people’s lives that the Republicans’ attack on the ACA demonstrated is precisely what Jane Austen satirizes. She skewers characters who do not care about the well-being of their dependents. At the beginning of Sense and Sensibility, for instance, Mr. John Dashwood and his wife decide not to give his dispossessed step-mother a modest annuity because she might live another “fifteen years,” and “her life cannot be worth half that purchase.” For this rich and selfish couple, the well-being of a low-income woman is not worth investing in. In Persuasion, which Austen wrote when she was dying, the impoverished Mrs. Smith is “afflicted with a severe rheumatic fever” that might be alleviated if the novel’s anti-hero, Mr. Elliot, would execute her late husband’s will. But Mr. Elliot ignores the poor woman’s “urgent applications” with a “hard hearted indifference to any of the evils [his neglect] might bring on her.” It is easy to imagine how Mr. Elliot would vote on Medicaid.

In Austen’s novels, such inhumanity is common in a society based on socioeconomic advancement and self-interest. In fact, human callousness is such that other people’s debilities and deaths are often eagerly anticipated. In Pride and Prejudice, when Lady Lucacs learns that her daughter is marrying the heir to Mr. Bennet’s estate, she begins “to calculate with more interest than the matter ever excited before, how many years longer Mr. Bennet was likely to live.” In Mansfield Park, Mary Crawford hopes the stricken older Bertram brother will die so the younger brother, whom she wants to marry, will inherit his estate; then, she gloats, “there will be two poor young men less in the world.” Some Austen characters seek the entertainment of death, as when Louisa Musgrove falls “lifeless” on the pavement of the Lower Cobb at Lyme, and “the workmen and boatmen” gather “to enjoy the sight of a dead young lady.” According to the narrator of Emma, “Human nature is so well disposed towards those who are in interesting situations, that a young person, who either marries or dies, is sure of being kindly spoken of.”

But this is obviously not the kind of human nature Jane Austen means to sanction. In this she is joined by Senator John McCain, who, though suffering from brain cancer, took to the Senate floor to defend the highest American political ideals. “Considering…how corruptible human nature can be,” McCain exclaimed, “the problem solving our [political] system…make[s] possible, …and the liberty and justice it preserves, is a magnificent achievement.” Because individual self-interest cannot be trusted, McCain implied, our legislative system “gives an order to our individual strivings that has helped make ours the most powerful and prosperous society on earth. It is our responsibility to preserve that, even when it requires us to do something less satisfying than ‘winning.’” As McCain has all too much reason to understand right now, a partisan and individualized form of “winning” should never be the goal of a national policy about life and death. In a final dramatic vote, he was one of only three Senate Republicans to kill the repeal of the ACA.

We can dispute about Austen’s own political sympathies ad nauseam. Was she a strict Tory? Was she an abolitionist? Do her novels defend the traditional upper-class order or subvert it? The answers are complex and ambiguous, and though I favor a more progressive view of Jane Austen, I have no interest in defending that here. Indeed, it is arguably one of the most conservative scenes in Pride and Prejudice that speaks to the kind of guidance I wish Republicans in government would take to heart. The scene occurs in the famous chapter where Elizabeth Bennet sees Mr. Darcy’s magnificent estate at Pemberley and is so smitten with his socioeconomic privileges and patriarchal power that she cannot help but feel that “to be Mistress of Pemberley might be something!” After listening to Darcy’s housekeeper wax eloquent about her “master,” Elizabeth looks at Darcy’s portrait: “As a brother, a landlord, a master, she considered how many people’s happiness were in his guardianship! — How much of pleasure or pain it was in his power to bestow! — How much of good or evil must be done by him!”

Based on the good care Darcy has taken of a lower-class housekeeper, and of all the people under his authority, Elizabeth falls in love with him. She now trusts Darcy to rise above the corruptibility of human nature and to act, not as a self-interested individual, but as the guardian of “people’s happiness” — as a man who recognizes his privileged capacity to do “good or evil,” to create “pleasure or pain.” Elizabeth trusts that Darcy will exercise his awesome power over the lives of the people who depend on him with generosity and compassion.

Most Republican Senators and Congressmen — not to mention the president — have shown little capacity for such gallantry. We can only hope that their future attacks on American health care will die. 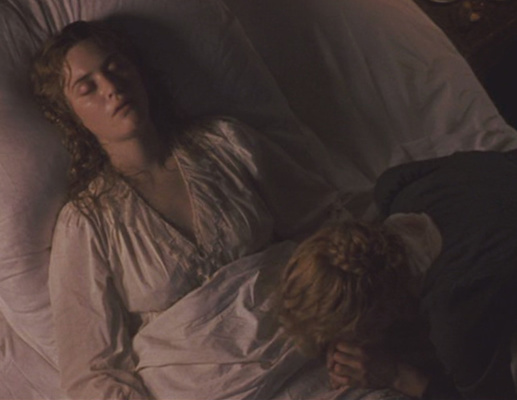